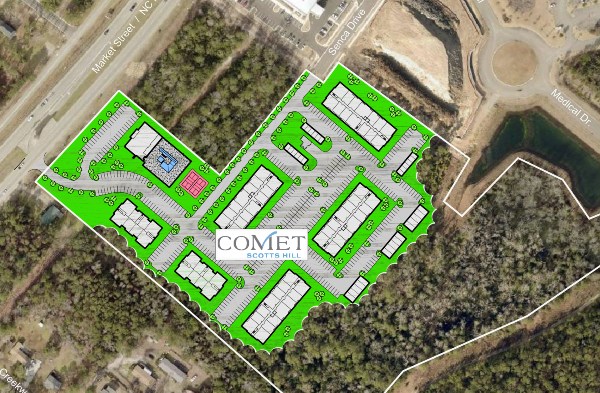 More than 250 apartments in three- and four-story buildings are proposed for land in Scotts Hill off Market Street. (Site plan by Cindee Wolf)

A developer wants to build more than 250 apartments in northern New Hanover County, on undeveloped land off Senca Drive and Market Street.

The complex would be called Comet Scotts Hill, according to a site plan. The same developer created Comet Westgate in the northern Brunswick County town of Leland.

Seth Coker, partner in Comet Development, said the plan is to build 256 apartments in three-story buildings and four-story buildings that include elevator access. Amenities incolude a pool, clubhouse, pickleball courts and more of what renters have come to expect from Class A, suburban apartment communities, Coker said.

Coker said Comet Development, based in Greensboro, chose Wilmington for one of its latest projects because of the Port City's growth over the past 20 years and its projected growth over the next two decades. Coker has seen the growth firsthand as a part-time Wilmington resident.

"It just takes so long to develop and build right now," he said. "The housing can’t keep up with the population growth at the moment."

Coker said if plans progress as hoped, construction on Comet Scotts HIll could begin by the end of the year or early next year, in which case the apartments would be complete around the end of 2023.

Nineteen acres of the more than 20 that Comet Development has under contract would need to be rezoned to allow the apartments, from a commercial designation to multifamily, he said.

“This proposal would require a Conditional Zoning District approval from New Hanover County [including the Planning Board and Board of Commissioners],” stated a community notice letter to adjacent property owners. The letter is from Cindee Wolf of Design Solutions, who is representing Comet Development in the zoning request.

Wolf explained, “A Conditional Zoning District allows particular uses to be established only in accordance with specific standards and conditions pertaining to each individual development project. Essentially, this means that only that use, structures and layout of an approved proposal can be developed.”

New Hanover County requires that a developer notify nearby property owners and hold a meeting for interested parties. But because of COVID-19, a meeting can’t be held, Wolf stated in the letter.

In lieu of the meeting, people with comments and questions can contact Wolf at 620‐2374 or via email, [email protected]