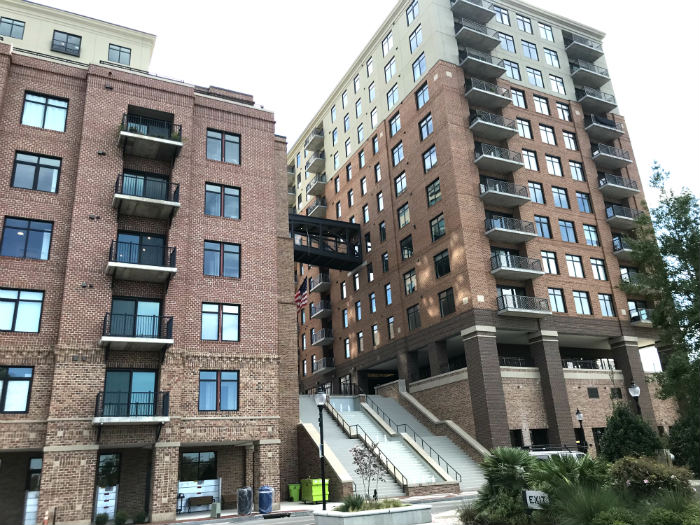 East West Partners, developer of River Place (shown from Water Street) in downtown Wilmington, as part of a public-private partnership with the city of Wilmington, is finishing up the 13-story mixed-use project. (Photo by Cece Nunn)
One of the biggest construction projects downtown Wilmington has ever seen is nearing completion, a developer said Wednesday.

The 13-story mixed-use development is a partnership between the city of Wilmington and East West Partners, having replaced a defunct city parking deck with condos, apartments and commercial space.

"River Place is finishing up," Perry said. "We have lots of residents who have moved in to the South tower, the tower that's at the corner of Water Street and Chestnut, and also the building that wraps the parking garage on Water Street. . . .  in the tower that is behind that, which is an apartment building, I think we've got about 20 people who've moved in there."

In the commercial portion, Axis Fitness has opened and pizza restaurant Mellow Mushroom is on its way to opening. Other tenants on the way include a Bank of America branch and DGX, a high-end urban food market brand by Dollar General.

In another East West Partners project in downtown Wilmington, an historic building is being rehabilitated to hold office space. For the Gaylord Building at 226 N. Front St., East West is partnering with Texas-based Common Desk, a coworking firm founded in 2012.

Perry said the team hopes to be finishing the 226 N. Front St. project by January.

"It's going to be a really exciting workspace," he said.

There's not as much to talk about at this point when it comes to a more recently announced development on nearly 400 acres adjacent to the Brunswick County city of Southport, Perry said.

"We felt extremely fortunate and honored that the Bald Head company [Bald Head Island Limited] approached us about being a partner in the development of Indigo," Perry said.

The $565 million Project Indigo would include single-family homes, apartments, townhomes, duplexes and some commercial space that could hold medical offices, restaurants and other users.

"We think it's got the chance to be a really fantastic neighborhood, different kinds of housing, different price points, hopefully some institutional and office uses, recreational uses, what have you," Perry said. "We're working slowly through that to get through the pandemic and understand what the best type of development should be there. I think you'll see us beginning to make application for approval of the master plan and the site plan in the coming months."

He said hopefully development on Project Indigo could begin next year, "but in these uncertain times, the exact timing is a little bit unknown right now."

Environmentally speaking, "that's a very special piece of land, and it needs to be developed with great care and with great environmental stewardship," Perry said.

East West Partners is also working with the city of Wilmington on a $90 million mixed-use project that would stand at its northern gateway. Delayed by the pandemic, talks on the northern gateway development, another public-private partnership, could be gearing up again soon, Perry said.