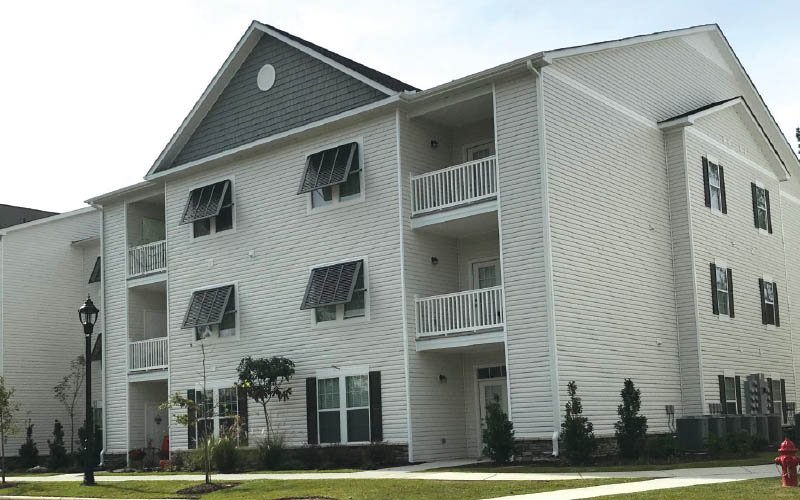 Harrington Village has been adding to Leland’s inventory of apartments, with many more on the way as the town and surrounding area continues to grow. (Photo courtesy of Harrington Village)
Leland is growing so fast, it needs more housing ASAP.

In fact, some incentives were granted recently to a developer planning to build more than 700 apartments on newly annexed property in the Brunswick County town over the next several years.

While Brunswick is often associated with planned developments that hold hundreds of single-family homes, no community in the U.S. can ignore the fact that demand is also high for apartments and other dwellings.

“There’s a great discussion going on now with regards to what the trends are, and I think it depends on the different demographic groups,” said Lynn Gulledge, a Realtor with SOHO Islands Real Estate and this year’s president of the Brunswick County Association of Realtors. “As some people get older, they’re leaning toward renting because that way they have liquidity and they also have the ability to be mobile or if they want to be closer to the kids and the kids move.”

In Leland’s case, the town recently annexed 57 acres where the apartments are set to be built, located next to planned community Brunswick Forest. The project, under development by Greensboro-based Evolve Companies, is expected to be called Hawthorne Waterside.

Leland Town Council approved incentives recently for the project because it will increase the town’s population, taxable property and business prospects, said Gary Vidmar, economic and community development director for the town of Leland.

So why is apartment demand high in the rapidly growing northern Brunswick County town?

“I think it’s a couple different things. First, the value of land in this area is going out of sight, and I’m speaking of Leland, but it’s happening all over this area,” Vidmar said. “So property values are increasing, and as a result developers, in order to be able to afford purchasing that property, must find a more dense product than simply the suburban, single-family home sites that we’ve seen going up here in Waterford, Brunswick Forest and other developments.”

He said townhomes are another way to achieve that density.

“And we’re going to be seeing more townhome development, but apartments are obviously one way to do that,” Vidmar said.

The second reason for the apartment boom spreading to Brunswick County is lifestyle choice.

Like Gulledge, Vidmar said some people prefer renting. They “no longer want to necessarily own real estate or maintain real estate. They prefer to just rent because it makes them more mobile. They don’t want to worry about selling a home if they get transferred or want to relocate, particularly the younger families and millennials,” he said. “It’s a more desired lifestyle than it has been in the past.”

Vidmar said the increase in apartment interest is a progression of what’s been happening in Wilmington the past couple of years.

Harrington Village, a 20-acre mixed-use campus that will hold 13 apartment buildings at the corner of Village Road and Lee Drive, includes 161 apartments in its first phase.

“The developer reported in January that, of the 161 apartment units that are available, 154 units are leased and 136 units are occupied. The retail/ commercial space is about 49 percent leased. Sandalwood Shops is now open,” the report stated.

Other Leland Gateway District redevelopment projects in progress include a developer’s submission of a conditional rezoning request for property on Village Road west of Woodland with plans to construct 77 townhomes. Another townhome project, Woodburn Townhomes at the corner of Village Road and Dresser Lane, is complete, and the dwellings are listed for sale, the economic development report states.

While Realtors agree that buying a home has its advantages, including paying on an investment, “everybody needs a place to live, and they’re not necessarily in a position to buy,” Gulledge said.

But even as rental units and other types of housing are in demand, new single-family homes are still on the rise throughout Brunswick County.

“New construction on this end – it continues to be very, very strong and has been over the last several years,” Gulledge, who lives in Oak Island, said of the southern Brunswick County town. “And that’s not letting up. People love the beach … and Brunswick County is the fastest-growing county in the state right now.”