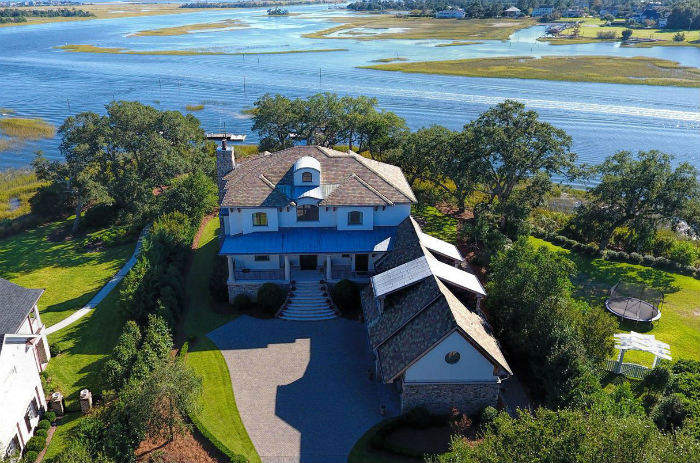 The property at 407 Bradley Creek Point Road in Wilmington had an asking price of nearly $5 million. (Photo courtesy of Intracoastal Realty)

New Hanover County’s luxury home market fared better in October after its worst month ever recorded in September, according to a report released this week.

The report explained that Hurricane Florence, which hit the area Sept. 14, forced real estate, mortgage and law offices to close and delayed inspections and closings, resulting in a weak September.

"In October, the local real estate industry in general, and the luxury market in particular, showed strong signs of returning to normal," according to the report compiled from the N.C. Regional Multiple Listing Service (MLS) by Kathleen Baylies, broker in charge for Just For Buyers Realty.  "Eight homes valued at $1 million or more sold during the month.  The cumulative price tag for those properties was $14,125,790."

Only two luxury home sold in the region in September. Even with the Florence disruption, home sales in the $1 million and up range have been on the rise compared to last year for the most part, Realtors say.

But the report showed that October luxury sales this year in New Hanover were down from the same month last year, when 12 homes in the $1 million-or-more category sold in the county.

The report also stated, however, that 16 high-end homes in New Hanover, Brunswick and Pender counties went under contract, including the fourth most expensive listing in the area.

The property at 407 Bradley Creek Point Road in Wilmington had an asking price of $4.95 million and was on the market for nearly 21 months.

"The actual selling price will not be made public until the transaction closes.  The new buyer will take possession of a 6,500-square-foot mansion with 180-degree views of Bradley Creek," the report stated.

The waterfront home is 5 years old, but was built using antique doors, chandeliers and building materials, many of which were imported from Europe.  Additional features include an elevator, high end appliances, a wet bar, and a private pier, according to the report.

“The storm was devastating to so many of our friends and neighbors, and it left a certain amount of uncertainty about which direction the market would go,” Baylies stated in the report. “The latest sales numbers indicate Florence’s impact on real estate sales in all segments of the market, including luxury homes, will not be long-lasting.”