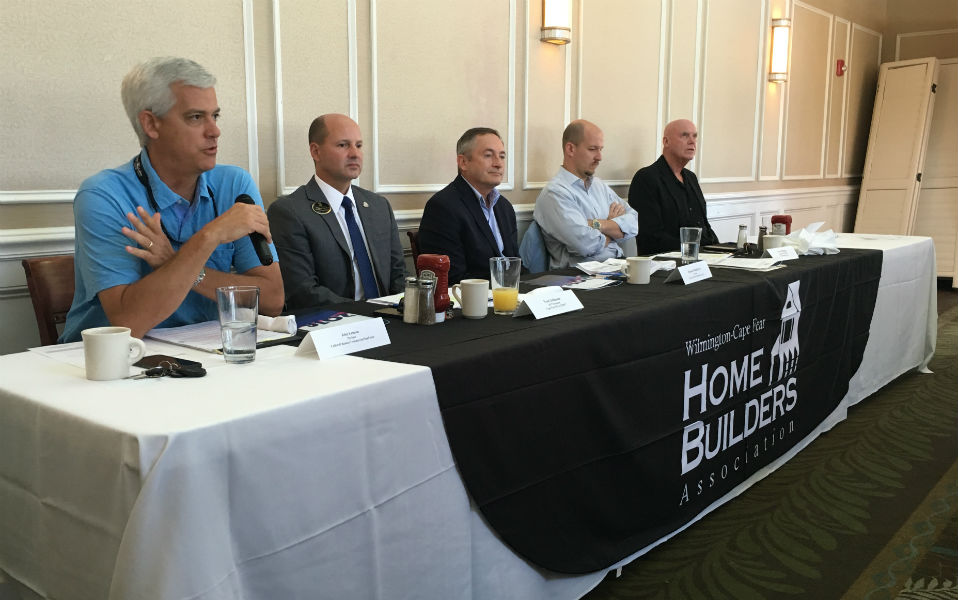 Although the real estate industry is booming in many ways in the Cape Fear region this year, the coming months and years present both opportunities and challenges, said participants in a panel Thursday.

Asked to share what’s working and what’s not in the current real estate market, Lennon said, “I think the biggest challenge and the biggest hurdle to our continued growth are labor and material costs in my opinion. I also run the sales and marketing at River Bluffs and all the builders that I talk to say that is the biggest challenge.”

“Our concern is how are we going to replace that inventory for people to have homes they want to buy that they can afford,” Johnson said.

Matthews, a commercial broker, said, “Over the past four years, we’ve seen inventory shrink in all the commercial categories – retail, office, flex space, heavy industrial, income properties and certainly land. . . Multi-family land, you just can’t find it on the market. If you do find it, you have to be fortunate enough to have it rezoned or find a seller that will sell it at a reasonable price.”

Wallace said availability of land in New Hanover County remains iffy, while more new homes have sold recently in Brunswick County than New Hanover. He said traffic is another challenge, but one that is expected to be addressed to a certain extent in the future.

“Fortunately, there’s money out there for projects . . . It will be 10 years before they’re finished. Those six- to seven-minute waits at traffic lights that you’re dealing with now, you’ll probably have to deal with that for another 10 years, but there is light at the end of the tunnel,” Wallace said.

Moderator Dave Spetrino, president of Plantation Building Corp. and WCFHBA first vice president, also asked the panel about their views on the upcoming development code rewrites by the city of Wilmington and New Hanover County.

Johnson said he feels the development ordinances for both entities should read the same, and that the city and county should try a one-stop shop for development projects. He also said the ordinances should avoid inclusionary zoning as a way to address the area’s lack of affordable housing because of the cost burden it can place on builders and developers.

Matthews said, “We’re going to have to address some concepts that we really haven’t before, which involves increased density in development, increased building heights and when appropriate, smaller setbacks.”

Lennon said it’s important to look to other markets.

“There are other cities that have capitalized on mixed-use, high-density zoning in urban areas that have thrived, and for some reason, we pay attention to certain groups of people that are here who don’t want things to change,” he said.