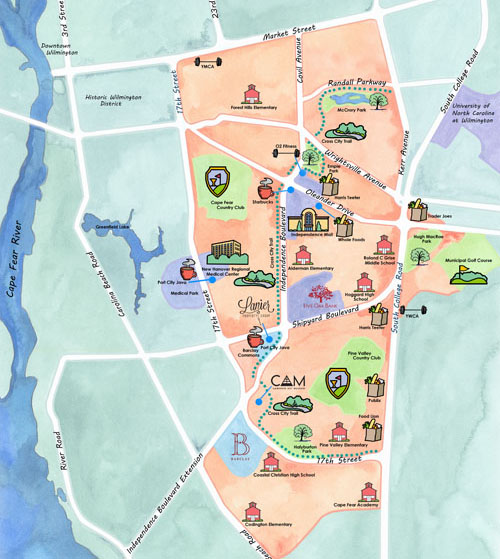 The most recent draft of a Wilmington midtown district map, rendered by Lois Watson of Watson Illustrating for Lanier Property Group, represents local efforts to more clearly define the area. (Illustration courtesy of Lanier Property Group)
It’s one of the few places left that contain large parcels of undeveloped land in the city of Wilmington, one of the busiest sites of new home construction in New Hanover County and one of the only places on the planet where Venus flytraps grow in the wild, just to name a few of midtown Wilmington’s attributes.

But some say the area referred to by some, especially those in the local development and real estate community, as “midtown” has never been clearly defined, a surprise considering its evolution into an employment, entertainment, shopping and residential hub within city limits.

Collaborating with other agents, businesses and institutions that call midtown home, Stephanie Lanier, broker in charge and CEO of Lanier Property Group, embarked on a project to come up with a definition for Wilmington’s midtown district through the creation of a map, a starting point for a larger effort.

Sometimes it seems, Lanier said, that midtown Wilmington doesn’t get as much buzz as areas like downtown,  Mayfaire and Monkey Junction.

“I don’t think it’s on the average person’s radar screen, but it really should be. This is where growth is going to happen in New Hanover County in the next 10 years,” said Lanier, whose office at 2512 Independence Blvd. in Barclay Commons is shown on the map. “We are really excited that we’re already there and that we get to be a part of it.”

“We thought it was really important that we were all on the same page about the vision for midtown, and we’re all very excited about the next five to 10 years and the development that’s going to happen,” Lanier said. “As midtown grows, I think we’re going to see more and more happening there.”

She said some people might not agree with the way the map outlines a midtown district for Wilmington.

“One of the things that we know will happen is that there will be some debate – that it’s bigger than this or smaller than this – but we’re kind of tired of waiting on somebody to decide what midtown is. We envision it as a whole movement, a way of branding part of the city,” she said.

Hill Rogers, broker in charge for Cameron Management, said he thinks that kind of branding is important.

“Midtown is a large area and a growing area within Wilmington and New Hanover County. The name brand recognition that Landfall and/or Mayfaire receives is hard to quantify, but that intangible element is certainly there,” Rogers said. “I think the same name recognition is important to midtown.”

And even though the boundaries could be up for debate, it’s a fact that more opportunities for living, working and  playing are on their way to midtown.

In May, Stone Theatres announced plans to build a 14-screen movie theater in the Barclay development.
“There is tremendous pent-up demand in this area of Wilmington for [another] multi-screen cinema,” said Herman Stone, president and CEO of Stone Theatres, in a news release at the time.

Stone Theatres is building the 55,000-square-foot cinema near Independence Boulevard and South 17th Street in the commercial part of the Barclay project, a joint venture between Cameron Properties Land Co. of Wilmington and Charlotte-based commercial real estate firm Collett.

Paramounte Engineering submitted site plans to the city in June that include the theater as well as new restaurant spaces that will be part of a 35-acre Barclay commercial section.

Once the theater and restaurant buildings are finished, more businesses – along the lines of a grocery store, mobile phone stores, hair salons, wine shop and additional restaurants, for examples – are expected to follow, Rogers said in June.

Lanier Property Group is only one of numerous companies to occupy office space in midtown.

Some smaller office spaces in the area have attracted businesses in recent years. Flat Fee Realty and Management opened in August in a newly revamped office building at 3710 Shipyard Blvd. Midtown seemed like a logical choice for a realty firm because of the necessity of traveling throughout the city, said Patrick Alderson, a Realtor and the managing broker at Flat Fee Realty.

“It’s a very central location where I can get just about anywhere in Wilmington in a matter of about 10 or 15 minutes, and it’s very, very convenient,” Alderson said.

Along with Flat Fee Realty and Management’s office, growing marketing firm Plan A Advertising and the management offices for area Buffalo Wild Wings franchises occupy the 5,600-square-foot building, a former urgent care facility that had been sitting vacant for several years.

Apartments are among the housing options on the rise in and around midtown. “Midtown” was used in the name for an upscale multi-family project that held a grand opening celebration in the spring.

The project, now a reality in the 223-unit One Midtown apartment community, had a 58 percent occupancy rate as of Aug. 28, with more tenants on the way.

As part of the mixed-use Barclay development in the works by Cameron Management and development partners, site work visible from South 17th Street and Independence Boulevard has started on a main road and regional pond. Also off those same roadways, home and town home models are open for tours at The Forks at Barclay, where 14 homes were under construction in August.

“Between Midtown (the land owned by Cameron Properties and the Oleander Company) and RiverLights, there is no other concentrated area in the city that will produce this much growth over the next 5, 10, 15, 20+ years,” Rogers wrote in an email. “That’s on top of the critical mass already in place with the established neighborhoods, retail amenities (old and new), businesses, parks and recreation, private clubs, civic institutions, healthcare, etc.”

Lanier said she believes the efforts of midtown stakeholders who have participated in the creation of the district map will continue to enhance a growing section of Wilmington and lead to more efforts to stamp the term “midtown” in the minds of residents, visitors and future residents and businesses.

“Our hope is that we will eventually have an event, maybe a series of events, that can showcase midtown,” Lanier said.