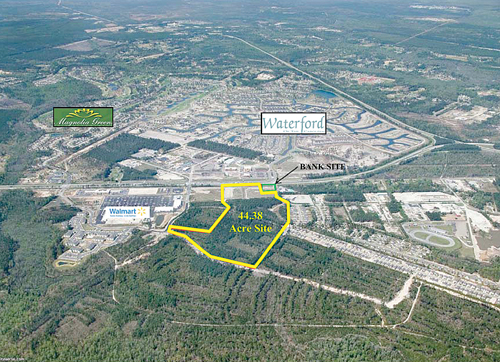 Untapped potential: Raw land such as the 44 acres shown above in Leland off Ploof Road are being marketed for development as the market gains traction.

Sales of raw, or undeveloped, land are on the rebound – a direct result of multi-family units and apartments planned across the region as well as cash investors taking advantage of low prices in high-growth locations, according to area brokers.

“There has been a noticeable increase in raw land sales in the area,” said Jack Kilbourne, a broker with Wilmington-based Maus, Warwick, Matthews & Co. “A lot of it has to do with the upward swing in apartment development.”

Since the start of the region’s economic recovery nearly two years ago, Kilbourne said he has closed on five tracts – all exclusively for various new multi-family developments and existing apartment expansions in Wilmington. That includes 11 acres near the intersection of Greenway Avenue and Lullwater Drive for Wilmington developer Adam Sosne’s Camden Forest, a student centered multi-family development near the University of North Carolina Wilmington that closed Sept. 4 for an undisclosed amount.

“People are encouraged by the market right now,” Kilbourne said. “They see the demand, and sellers have realized what the market price for their land is and are ready to
price their property to move.”

The trend is especially ripe in New Hanover County, where property values have dropped more than 15 percent, according to the latest data released by the county appraiser’s office.

Other brokers point to improving housing sales in northern Brunswick County as having strong growth potential for future raw land sales. For example, the Ploof Road property in the Westgate development in Leland is seeing some activity for potential development.

But southern Brunswick County and most of Pender County may have a ways to go compared to the pace of the raw land sales of their surrounding neighbors.

“The days of buying large acreage for expansive subdivisions are not going to happen for a while until the region’s housing inventory starts to decrease,” Kilbourne said. “So the activity we’re seeing in the market is mostly in New Hanover County with some activity in north Brunswick.”

And while property values are not indicative of the sales price for land, they do give investors leverage and a better idea about an asking price.

That means in some cases the land in New Hanover County is now priced hundreds of dollars less per acre. And with the low prices come numerous investors looking for property – especially cash investors.

“The lion’s share of buyers have cash,” said Hill Rogers, principal broker with Wilmington-based Cameron Management Inc. “They have either raised the cash or are investing on behalf of a hedge fund.”

Kilbourne agreed, adding that some buyers are even joining original landowners through joint venture arrangements to purchase tracts of property for future development. He said other cash purchasers are pooling their money with other investors to go in on a particular property together.

“People are getting creative to finance these types of land sales,” Kilbourne said. “They realize that banks aren’t lending, and they are now gathering the capital to purchase land among themselves.”

Rogers said despite seeing raw land prices fall, there are still land parcels moving at or above market values across the region.

“I’ve got an outparcel under contract right now that if it closes, you wouldn’t think there was a recession at all,” said Rogers, referring to a parcel he did not name but said was in central New Hanover County. “The bottom line is it all comes back down to location, location, location.”

He said the key was knowing what areas are seeing above-average growth – which is happening along high-traffic corridors and desirable zip codes in New Hanover County such as Mayfaire and Monkey Junction – and developing a plan that is conducive for the local market.

“Multi-family apartments are a given right now,” Rogers said. “We’re not seeing a whole lot of land being purchased for new office and retail development right now.”

“Office appears to be on a rebound, although there is definitely some major blocks of shadow space that could pose some challenges for that sector,” Eckel said. “Retail land plays are very targeted and are user specific as we haven’t seen retail developers and investors starting to land bank property for future development.”

Aside from regular brokerage duties, Cape Fear Commerical specializes in unloading bank-owned property for commercial development – closing on more than $20 million worth of properties and raw land within the last 12 months, with another $11 million pending, Eckel said.

Recently, the firm sold the 8.06-acre former Sawmill Marina property in downtown Wilmington to a Charlotte-based investment firm for $3.6 million – about $800,000 shy of its original asking price of $4.4 million.

The site is currently one of two being considered by the Wilmington City Council for a future multi-purpose stadium that could bring an Atlanta Braves franchise to the
Port City.

Eckel added that despite a glut in housing stock, land sales for new single-family subdivisions are beginning to increase – but there’s a catch.

“But there is still a lot of lot inventory in the B locations, such as north Brunswick and areas around Masonboro Loop Road, that will need to absorbed before we see raw land sales increase in new subdivisions.”

Area brokers say the uptick in raw land sales is an encouraging sign of economic conditions improving in the area, but warn investors to have a plan in place when moving forward with purchasing land for development.

“Buying raw land can be a very risky proposition, as we have seen over the last real estate cycle,” Eckel said.

“At the peak of the market, the old adage of ‘location, location’ seemed to be less important and ‘timing, timing’ became more critical.”