Coalition Comes Out Against Large Development Across From Downtown 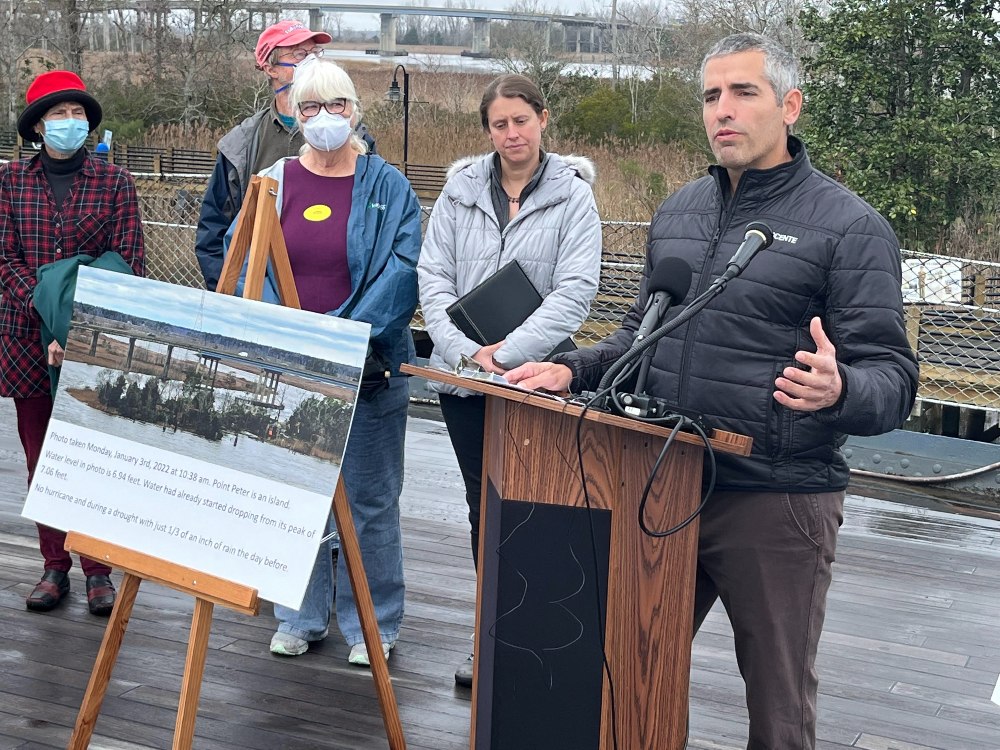 Amid a backdrop of floodwaters that could have served as Exhibit 1, leaders for a coalition of local nonprofit groups spoke adamantly against a zoning change that would help clear the way for a large development on Point Peter, a small peninsula that juts into the spot where the Cape Fear and Northeast Cape Fear rivers converge, near the Isabel Holmes Bridge.

A diverse mix of groups – among them the Brunswick County NAACP, Cape Fear River Watch and the Historic Wilmington Foundation – held a news conference Wednesday aboard the fantail of the Battleship North Carolina.

Although much of the coalition’s opposition to the Battleship Point project was the unsuitability of the land for such development, the group raised numerous other objections, including potential damage to the area’s cultural, historical and archeological legacy, diminishing of the floodplain, damage to marine estuaries and the aesthetics of the battleship, which lies just south of Point Peter.

Those attending the news conference had to trek through water as deep as a foot in some places to board and leave the ship, and the increasing frequency of flooding on Point Peter and Eagles Island (the battleship’s home) helped to fuel the group’s claims of why such a project should not move forward. 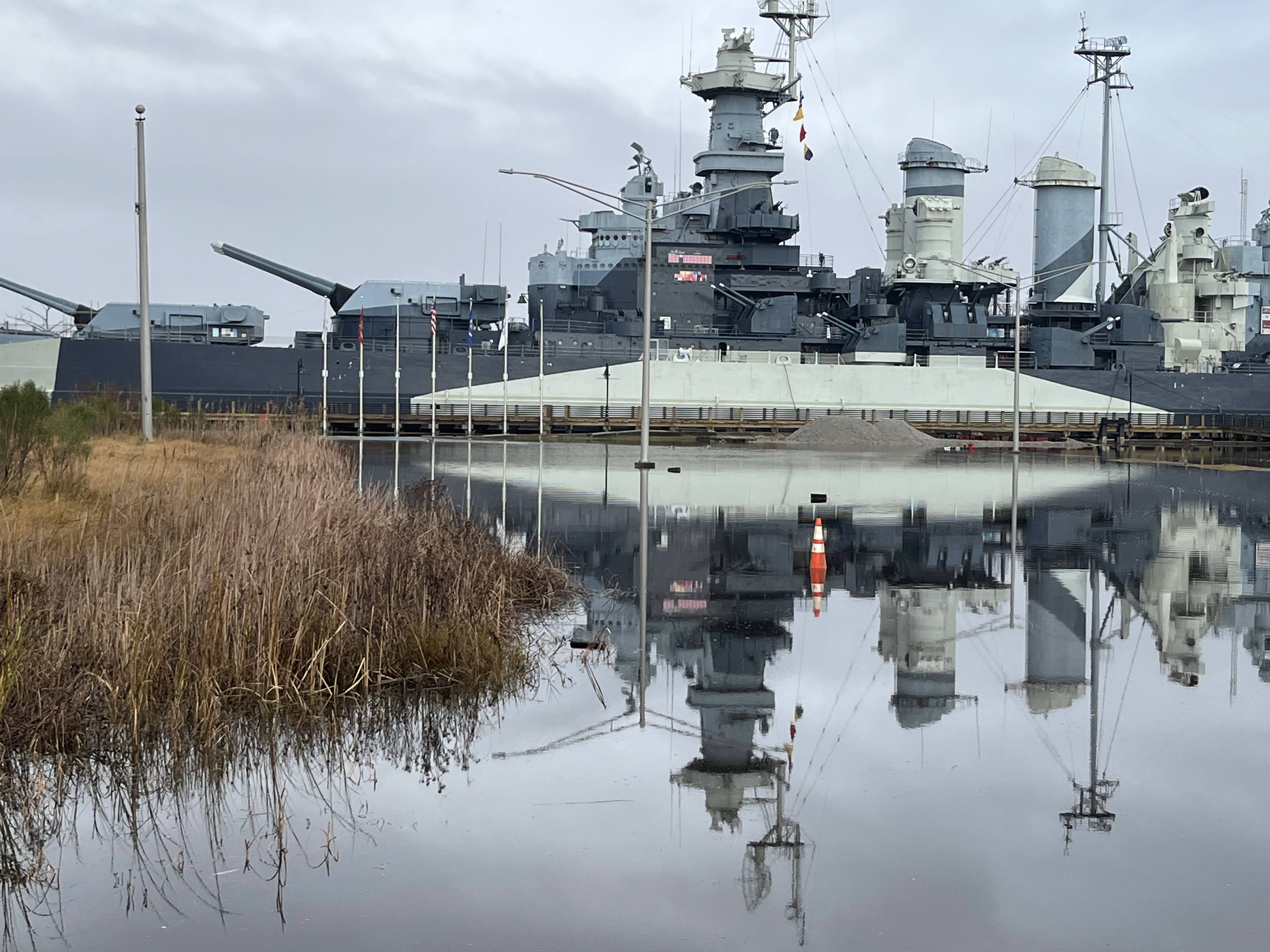 Calling the plan to build three towers, which would be the tallest buildings ever built in Southeastern North Carolina, on the lowest point in New Hanover County a "short-sighted boondoggle,” Cape Fear River Watch’s Kemp Burdette laid out a host of reasons the coalition members oppose the plan, urging the public to do the same.

“Point Peter … is at the mercy of the water that surrounds it upstream – the largest watershed in the state – and downstream – the Atlantic ocean,” Burdette said. “And all of that water is rising in one way or another.”

Although the battleship is on Eagles Island – separated from Point Peter by the Cape Fear, where the river jogs west – a photo taken Monday showed that flooding had transformed the triangle-shaped peninsula into an island.

Since earlier this week, the combination of lunar-caused extra-high tides as well as a strong wind from the southwest has, at times, left almost the entire battleship area underwater. On Wednesday, staff members handed out trash bags for visitors to use as makeshift waders.

Although Battleship North Carolina leaders have no official stance on development nearby, in addition to listing environmental concerns, Burdette said the project as proposed would negatively impact the ship’s viewshed – the geographical area that is visible from a certain location.

“What is clear to each of the many groups that you see represented here today,” Burdette said, “is that to allow this kind of development on Point Peter or anywhere along the western bank of the river is sheer folly. While the developers might see big short-term profits, our community would ultimately pay the price.”

On Wednesday, a representative for Wilmington-based KFJ Development Group, the group behind the Battleship Point project, told the Greater Wilmington Business Journal that all involved in the project were aware of the infrastructure challenges the ambitious project must meet as well as the risk involved by building on Point Peter.

“We know the sea levels are going to rise; the hurricanes are going to come,” the spokesperson said. “With the king tides like we had in the early part of this week, portions of Point Peter are going to have some nuisance flooding.

“We understand all those risks and although we have not yet engineered for all of them –  we are still pretty preliminary in all of our work – we don't dispute most of them. We don't dispute the science about the challenges around building in an environmentally sensitive area.”

KFJ is composed by Kirk Pugh of KBT Realty, Jim Lea III of Lea/Schultz Law, and Frank Pasquale, a developer who is serving as technical director of KFJ.

The spokesperson said that KFJ has hired Indigo River Group, a New York-based architecture and design firm that specializes in environmental resilience and sustainable waterfront projects. KFJ’s representative also said that a principal of the firm had offered to meet with Burdette but so far has not gotten a response.

In addition to insisting it can develop an environmentally friendly project, KFJ says that the addition it is seeking to New Hanover County’s Unified Development Ordinance – a new zoning district, Riverfront Urban Mixed-Use – would actually protect most of the area from future heavy-industry use, which is allowed under current zoning.

“What we are proposing is more environmentally friendly and it's more environmentally restrictive in what can be done and how it can be done,” the KFJ spokesperson said. “It specifies things like living shorelines, it specifies building-height limits, exactly where you can build, stormwater management and capture and filtration. All of those things that are restrictive in terms of development. Currently they don’t exist in a heavy industrial zone.”

Burdette was highly skeptical of such a development being able to meet those standards on or near Point Peter.

“Where would storm water from this site go to be filtered?” Burdette asked at Wednesday’s news conference. “The soils at the site are wetland soils and don't drain; the water table is high due to the proximity to two rivers. So storm water can't soak into the ground, even if it's captured.

“Bulkheads like those proposed by the developers exacerbate flooding, change flood-plain dynamics and destroy important wetlands," Burdette said. “The idea that a living shoreline could be constructed at this site in conjunction with a massive bulkhead at the confluence of two large rivers is outrageous.”

The New Hanover County Board of Commissioners is expected to hold a public hearing Monday on the request to amend Articles 3 and 4 of the Unified Development Ordinance to establish a new zoning district, the Riverfront Urban Mixed-Use Zoning District. The hearing begins at 4 p.m. in room 301 of the New Hanover County Historic Courthouse, 24 North Third St.