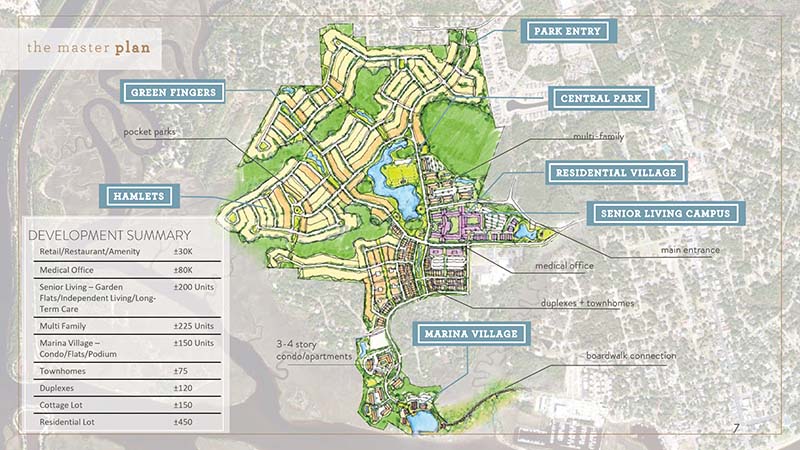 The $565 million project by Bald Head Island Limited and East West Partners, the River Place develop­er, would incorporate single-family homes, apartments, townhomes, duplexes and some commercial space for what would be considered ameni­ties for the residents: medical offices, restaurants and other users.

“Our goal has been always to make it a legacy Southport commu­nity,” said Chad Paul, CEO of Bald Head Island Limited, during a pre­sentation last month to the South­port Board of Aldermen.

Paul said the development would be a “10- to 15-year transaction.”

He said 15% of nearly 400 acres is within Southport’s city limits while the rest is in extra-jurisdictional territory [ETJ] and unincorporated Brunswick County. The idea would be for the city to annex, via a vol­untary annexation, the rest of the property, Paul said.

The concept development plan for the property where Project Indigo would be built is a much less inten­sive use than what would be allowed by current and previously approved development rights, Paul said.

“We have pre-existing devel­opment rights associated with the current PUD in place, which we will alter.  It’s really going to be downscal­ing the current PUD intensity and downscaling of what was previously approved for the land tracts that currently reside in the county, which is a good thing in terms of creating a legacy Southport community,” he said.

Project Indigo will have as much connectivity as possible and empha­size walkability, with sidewalks on both sides of the streets.

He added, “We’re going to lay out lots just like we do on Bald Head … there will be no cutting of 200-year-old oak trees.”

Paul said if a street might run into the path of an ancient oak, the street will be moved. The plan is for 30% of the community to consist of greens­pace.

The portions of the site located within Brunswick County were culled together by Bald Head Island Lim­ited LLC from 13 different parcels that were part of a previous planned development that went bankrupt. The portion of the site located near Indigo Plantation Marina is part of a pre-existing PUD that already has water and sewer availability via the city of Southport.

Paul said Bald Head Island Limited has a 35-year relationship with the city “in terms of bringing on good, ecologically friendly and considerate development to include Indigo Plantation and Marina in the 1980s-1990s and the Deep Point Bald Head Island Ferry Terminal facilities in 2009.”

That relationship is expected to continue, members of the Project Indigo team said.

“We’re not coming here to tell you how we’re going to do our development; we’re coming here in a collaborative spirit,” said Lucien Ellison, senior partner with East West Partners in Wilmington, during the presentation. “We want to have a collaborative relationship with the city of Southport and the Board of Aldermen and the city staff … to come up with something that works for everybody.”

One of the specific tasks the proj­ect team also wants to accomplish is to form a relationship with Dosher Memorial Hospital in Southport, Ellison said, adding that the project might offer an opportunity to take some pressure off of the hospital.

That’s one reason why the plan for Project Indigo includes about 80,000 square feet of mixed-use facilities to include medical office space.

“The idea is some of the mixed use will be the ancillary doctors’ offices, the ancillary outpatient services that we can do and work with the hospi­tal on their expansion needs,” Paul said.

In addition, Project Indigo could also have a first-rate, state-of-the-art assisted living facility with 150 to 200 beds, he said.

“That’s something that if the city wants to do it, we’ll do it,” Paul said. “It’s trying to work with the pieces we have to really support Southport and the hospital.”

Southport Mayor Joe Pat Hatem said after the presentation in July that Project Indigo is “probably one of the most exciting projects” for the city’s future, pointing out the ability of residents there to age in place because of the different types of housing, including senior living units, in the plan.

Hatem also said at the end of July that the next step in the governmen­tal process includes the project team working with the city staff and city planner Thomas Lloyd, after which the plans would eventually be part of a Southport Planning Board agenda.

In addition to partnering with Bald Head Island Limited on Project Indigo, East West Partners has been working with the city of Wilmington on River Place, a 13-story, mixed-use structure in downtown Wilmington that includes apartment, condomini­ums, a parking deck and commercial space.

Upcoming River Place residents have begun finalizing their purchase of some of the condos in the development, and apartment residents are expected to soon move into the apartment section, The Overlook at River Place. Tenants coming to the commercial space include Mellow Mushroom, Axis Fitness, high-end urban market DGX and a branch of Bank of America.

Founded in 1976, East West Part­ners is based in Chapel Hill and has a Wilmington office.