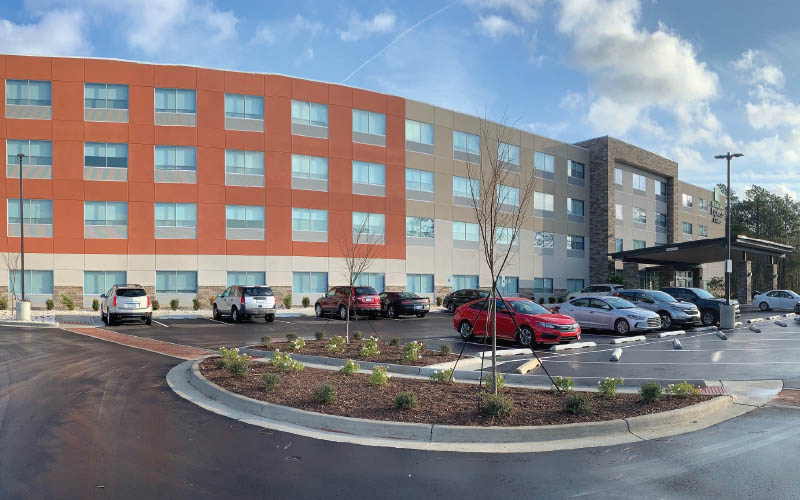 For one example, a Home2 Suites by Hilton is underway in the 5500 block of Market Street.

Developed by The Generation Companies based in Raleigh, the 125-room hotel is projected to open in the fourth quarter of this year, said Jeff Castleberry, the firm’s senior vice president of real estate.

It’s the third Home2 Suites by Hilton, an extended stay hotel, for The Generation Companies. The firm opened one in North Charleston in 2012, selling that one to a large real estate investment trust (REIT) the day it opened, and finished another in Augusta, Georgia, in 2013.

The Generation Companies was familiar with Wilmington because the firm had owned the Suburban Extended Stay Hotel on Eastwood Road and built the Homewood Suites in 2010.

The demand in the Wilmington area for more hotel rooms comes from several factors, Castleberry said.

The area “continues to grow population- wise. You’ve got very great, diverse demand drivers down there: You’ve got business and corporate [travelers]; you’ve got beach, vacation and destinations stuff; you’ve got the university and the airport,” Castleberry said. “All the surrounding communities are also continuing to grow.”

In general, he said, plans for hotels don’t always work out.

“Sometimes things end up getting built; sometimes they don’t,” Castleberry said, “particularly in the hotel industry.”

But the Home2 Suites is rising on Market Street, under construction by general contractor Hendrick Con struction Inc. of Charlotte.

“The good brands like Marriott and Hilton – there’s always a market for those higher-quality brands in my opinion,” Castleberry said. “I think they’re preferred from an investment standpoint because of the strength of their brands.”

Last year, a Georgia hospitality firm announced plans to build a Home2 Suites by Hilton at The Pointe at Barclay in midtown Wilmington.

The company intends to create the four-story, 108- to 110-room hotel beside The Pointe 14 movie theater.

The Home2 Suites at The Pointe will be one of the first Wilmington hotels for Ideal Hospitality, an owner- operator company that has hotels throughout the Southeast, including in North Carolina, South Carolina, Georgia and Florida.

The four-story, $12 million structure was built on 2 acres.

Hotel developer Steven Arp, who’s associated with Kismet, said in January that he and his partners want to build two more hotels in the area, although he did not disclose where they’re looking for property.

“We just like the market, and I think there’s more room,” Arp said. “Supply hasn’t gotten too big yet.”

In Porters Neck, a 104-room Holiday Inn Express is under construction, for what will be the only accommodations in that part of Wilmington and Pender County up to Hampstead.

The hotel is expected to be open during the first quarter of 2021, said developer John Sandlin, founder and president of Wilmington-based Clarendon Properties. It will be managed by Crown Hotel and Travel Management.

“We are looking at other projects” in Wilmington, Sandlin said.

He said demand remains in the area for several reasons, including the region’s beaches, its weather and its quality of life.

“The area’s just very popular. North Carolina’s very popular,” he said. “We are doing several in the Raleigh area. That’s almost a bulletproof area too. It’s just a bigger place is all, so there’s more demand, but on a per capita basis, they’re both very strong markets.”

“We really don’t have any that far north in that area, but there’s such tremendous growth out there now,” said Hufham, president and CEO of the New Hanover County Tourism Development Authority.

Of the new Market Street hotel, Hufham said the corridor is a “great location” because of its location, with its proximity to the area’s beaches.

“It’s nice to see the hotels coming up in different areas of town,” she said. “It’s giving us not only more variety but more locations depending on what people are here for.”

The Aloft hotel under construction in downtown Wilmington about a block away from the Wilmington Convention Center is another example.

“Always, we see the need for additional rooms here in what we call our Convention District,” Hufham said.

Of the Home2 Suites at The Pointe at Barclay, Hufham said, “The Pointe is a brand new area for us. It’s going to be in closer proximity to Carolina Beach and Kure Beach,” adding that it’s close to the center’s restaurants and movie theater.

Additional hotels are either planned or being pursued by developers of projects near Wrightsville Beach. One of the planned hotels is a luxury brand, The Westin, which would anchor a more than $200 million project called The Avenue on Military Cutoff Road.

A measure of the hotel market is how much room occupancy tax (ROT) has been collected. The ROT numbers for Wilmington through November 2019 came in flat, with about a 0.05% increase, compared to the same period in 2018. But it’s important to note, Hufham said, the anomaly produced by Hurricane Florence in September 2018.

As a result of the storm, most available hotel rooms were full, including those occupied by disaster workers, contractors and displaced residents. But, she said, “we’re looking at some really good numbers compared to 2017-18 … We’re seeing a nicer growth from there.”