The Sears building will be demolished to make way for newly-built spaces that will house high-volume retailers and the addition of outparcel space and residential units, a news release said. A hotel and medical office building, and the incorporation of green space for a village feel, are also part of the plan for an area near JC Penney, the release stated.

Last year, Rouse Properties purchased more than half of the mall, which in total includes more than 1 million square feet, in transactions that were valued at more than $54 million and included the Sears space, according to New Hanover County property tax records. The change came as the property was in the midst of foreclosure proceedings, resulting from the previous owners defaulting on a $110 million loan.

The transformation of the interior and exterior of the property will be highlighted by the removal of a portion of the mall's interior to accommodate a lifestyle streetscape and exterior retail entrances, along with the Sears demolition.

Mall officials are currently working with the city of Wilmington on obtaining the necessary approvals and permits, and hope to begin construction later this year, according to the release. 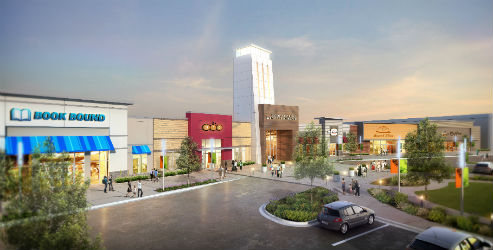 “The property as it currently stands is significantly undervalued given it sits just 7 miles from the Atlantic Ocean,” said Helen Lewis, general manager of The Collection at Independence, in the release. “We feel our plan as designed will unlock the true value potential of the property and will be a tremendous growth driver for the community, as we have appropriately incorporated the wants and desires of the market with the demands and expectations of the category-leading retailers we are looking to attract. We are looking forward to working with the City to move forward our vision.”

According to the release, in addition to adding technological and aesthetic upgrades throughout common areas, a portion of the center’s interior in the Sears wing will be removed to build a restaurant streetscape for multiple upscale dining and retail options and to combine indoor-outdoor elements.

The release stated that the removal will also allow for exterior facing retail entrances.

"The Sears box will also be demolished to accommodate a mix of new-to-market category-leading brands, some of which will be announced over the coming weeks," the release stated.

Additional details include constructing outparcel space along the property’s north end to be leased to all types of retailers and adding residential units along the west end "to help address the shortage of housing available in Wilmington," the release stated.

Some retailers will need to be relocated to accommodate the construction process, the release stated.

"While it is still too early to comment on a finalized merchandising layout or its leasing initiatives, The Collection at Independence is committed to working together with all parties – its tenants, partners, members of the community and municipal officials – throughout the duration of the project. Furthermore, the property will remain open throughout the entire project," the release stated.

Lewis added in the release, “Having been the general manager of this property for over 23 years, I have never been more excited about the future of this property as I am today. The vision we outlined is unlike anything in the market and will ensure The Collection at Independence remains viable, relevant and an important fixture in this community for years to come.”

Efforts to reach a Sears representative to find out more details about the future of the Sears store at The Collection at Independence were not successful Monday.