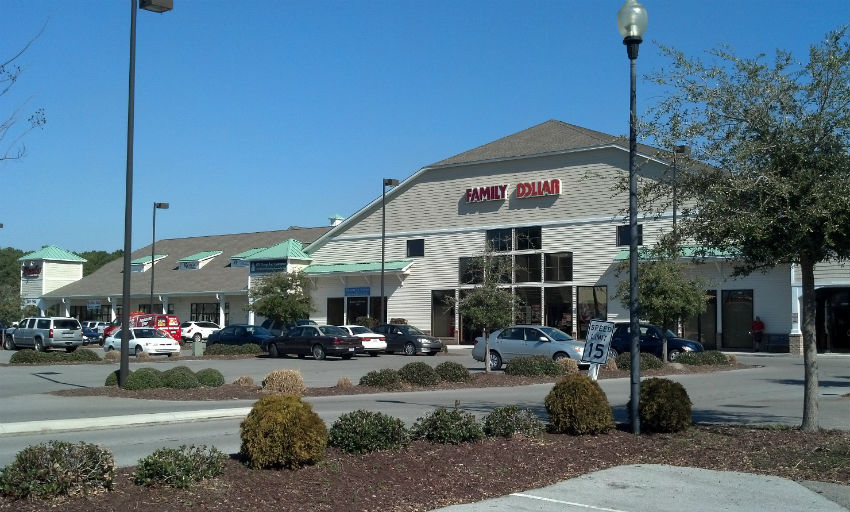 Gateway Plaza Shopping Center, anchored by a Family Dollar store and Sherwin Williams, sold recently for more than $7.6 million, according to local brokers. (Photo courtesy of Cape Fear Commercial)
Gateway Plaza Shopping Center in Surf City was sold to investors for more than $7.6 million, according to an announcement Monday from a Wilmington-based commercial real estate firm.

The nearly 48,000-square-foot center on N.C. 50 is anchored by a Family Dollar location and a Sherwin Williams paint store, said a news release from Cape Fear Commercial. Other tenants include Michaelangelo’s Pizza, The Shuckin’ Shack, Realo Discount Drugs and Camino Real Mexican Restaurant.

“Gateway Plaza was a pioneer development in Surf City that validated the market demand for retail in the area, which is now anchored with both regional and national retailers,” said Morrison, who has been the center’s leasing agent since construction, in the release. “It has been a rewarding experience to be a part of this project and see the evolution of the market since the center’s inception in 2006.”

Bryce Morrison has been retained to continue as leasing agent for Gateway Plaza under its new ownership. Current availability in the center includes suites from about 1,400 to 2,000 square feet, in addition to several options for office users, the news release said.