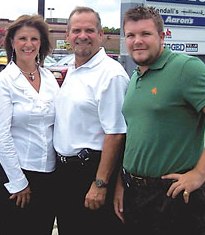 Bernadette, Garry and Nicholas Silivanch (L to R) have formed Eastern Carolinas Commercial Real Estate Inc. (File photo)
A family of brokers involved in hundreds of high-dollar commercial real estate transactions in the Wilmington area has parted ways with one of the region’s largest agencies to form a new company.

“The timing was right,” said Nicholas Silivanch, who had served as Coldwell Banker Commercial’s vice president of retail leasing and acquisitions while his father had served as vice president of office and investment properties. “We had five great years at Coldwell Banker Commercial, building our brand with the services we delivered to our clients, and we felt that it was time for us to go out on our own.”

“You really hate to lose somebody, but sometimes the best thing for both parties is for them to continue on new routes,” said Powell, adding that the change will provide new opportunities for both companies.

Eastern Carolinas Commercial plans to continue the “upward momentum” of Team Silivanch, a news release said, “as their client base has made the transition with them to the new company.”

Some of those clients include the retail centers Beau Rivage Marketplace in Wilmington, Leland Shopping Center and The Landing at Ocean Isle Beach.

The Silivanches were getting their new office at 5129 Oleander Drive, Suite 103, up and running Tuesday morning. In the coming days, ECCRE’s signs will be going up around town at current properties and at some new locations, Nicholas Silivanch said.