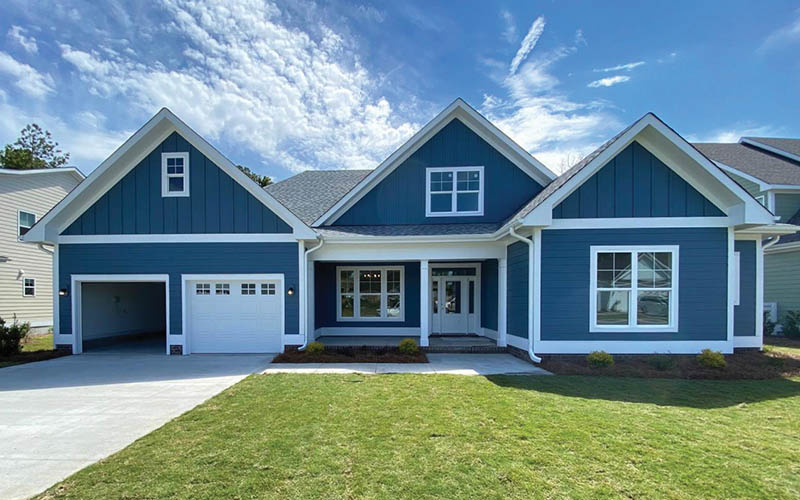 This home in the Anchors Bend subdivision in Wilmington sold for about $612,000 in May. (Photo c/o Barbara Pugh / Coldwell Banker Seat Coast Advantage)
For some would-be home­buyers, particularly in large Northeastern cities in the U.S, the coronavirus pandemic helped them make up their minds to find a home in the Wilmington area.

“I have talked to a couple of people that said this was kind of like the last straw for them,” said David Williams, Realtor with Century 21 Sweyer & Associates. “They were deciding, and this kind of pushed them to the edge to go ahead and make the move.”

While Cape Fear Realtors, the Wilmington-based Realtors as­sociation with members who sell homes throughout a large portion of Southeastern North Carolina, doesn’t keep track of where home­buyers are coming from, anecdotal evidence indicates an increase in interest in general.

Kathryn Ruth, relocation direc­tor for Wilmington-based Coldwell Banker Sea Coast Advantage, said the company received more referrals, up approximately 11% from April to May this year compared to the same period last year. The majority of the personal referrals, she said, seem to be from the Northeast, specifically Pennsylvania, New Jersey and New York

As of June 15, New Hanover County had 413 known cases of the novel coronavirus COVID-19, with five deaths. Whereas in New York City, at the height of their new case count in April, there were more than 8,000 new cases in one day, and the city had more than 21,500 deaths as of June 15.

But that’s not the only reason.

“We just don’t have the same problems that they have had there. They’re so concentrated and the tax­es are so high there in the New York area and the Northeast in general. A  lot of people I’ve talked to are looking to come down here,” Ruth said.

According to the latest Cape Fear Realtors report available as of June 15, home sales dropped more than 26% in May, continuing an expected decline because of measures to slow the coronavirus pandemic.

But pending sales, with a 26% gain over last May, showed signs of buyers coming back.

“Sellers are taking a more cautious approach to entering the market while buyers are returning in full force due to consistent low mortgage rates and limited inventory,” according to a CFR news release.

“Townhouse/condo properties had the largest gain with an increase of 8.8% to $206,650,” the release stated. “Marketwide, days on market has decreased 9.3% to 68, holding steady month-over-month from April.”

Tony Harrington, president of Cape Fear Realtors and owner and broker in charge of The Property Shop International Realty, said, “The remaining inventory that is actually out there is flying off the shelf and because of it, the property values are going up.

“And yet we’re showing the lowest inventory that we’ve had in a long time. So of course affordable housing is just non-existent.”

As a result of a lack of homes at lower price points, homebuyers are continuing to look at areas outside of Wilmington and New Hanover County.

“I’ve got several brokers that do nothing but the Duplin, Sampson, and northern Pender County market and everything they touch as far as a new listing pops off within a day,” Harrington said.

With the new tool, Realtor members can analyze weekly data points and compare them to the previous three months, according to the release.

“Right now, most homeowners and potential buyers have questions about the real estate market. This new tool allows Realtors to present those potential buyers and sellers with real-time data so they can feel confident moving through their transaction knowing exactly what the market is doing,” Harrington said in the release.

According to the release, “The pressure nudging prices higher is a combination of 311 fewer homes coming to market across the three-county region and pent-up demand from the prior month’s dampened buyer activity.”

Meanwhile, the national median existing-home price for all housing types was $286,800 in April, up 7.4% from a year ago, the NAR report stated.

She recently showed a couple a house on Figure Eight Island.

“I think they were looking for a safer place,” she said.

Pugh said although she hasn’t had a ton of people from out of state looking at real estate in the Wilmington area, she has had a lot of inquiries from potential homebuyers who live outside of North Carolina.

She’s also had a lot of local clients.

“They’re taking advantage of the low interest rates,” Pugh said. “I had a young buyer, a first time buyer who bought a home at 2.8%”

She added, “I think a lot of people were worried about the virus, but they still had to move. They still have to find a place to live.”