PPD Headquarters: A Big Building With A Bigger Impact 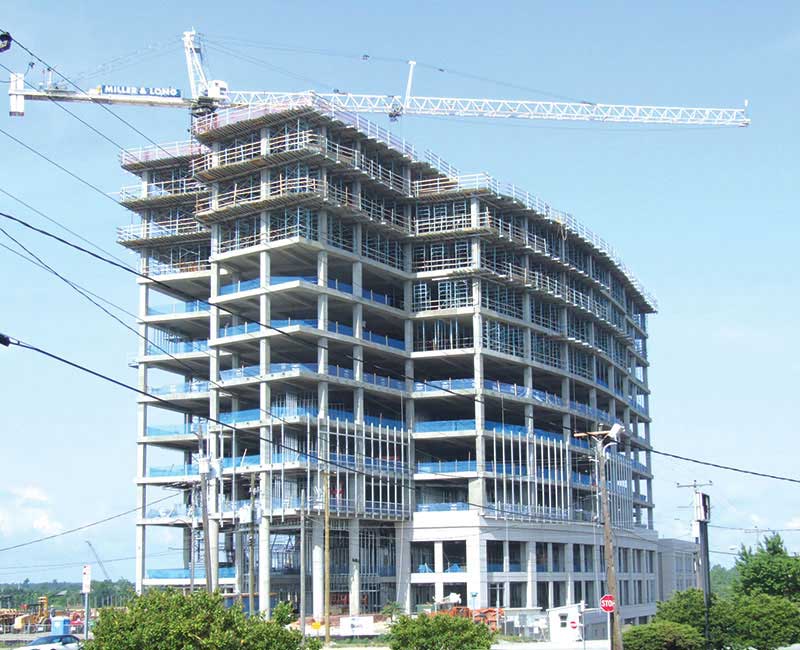 PPD's headquarters building at 929 N. Front St. in downtown Wilmington is shown under construction about 15 years ago. (File photo)

The headquarters building of global pharmaceutical firm PPD changed Wilmington’s skyline when it was built 15 years ago.

Standing 12 stories and containing at least 380,000 square feet, the structure at 929 N. Front St. is counted as one of the pivotal developments in downtown Wilmington’s revitalization.

They didn’t immediately offer detailed comments on their plans, if any, for the Wilmington workforce and headquarters, and efforts to gather more information about them were not successful Thursday.

But whatever happens, the structure looms large in the heart of Wilmington’s business community and downtown.

Hinnant, who these days is vice president of Wilmington-based Eastern Carolinas Commercial Real Estate, said the PPD building, along with the construction of the Wilmington Convention Center, Cape Fear Community College expansion and addition of infrastructure by the city “bolstered our local economy during the recession."

"It was really kind of a lifeline if you will, at a time when 28% of our local economy was tied to real estate and construction, and here we have this massive amount of investment going on both private and public between PPD, the community college and the city.”

Overall, the headquarters building is “a mighty powerful asset,” said Hinnant, who is not involved in any potential transaction related to the property.

The owner of the building, PPD entity River Ventures, also owns the PPD parking deck across the street and is No. 7 out of New Hanover County’s top 10 taxpayers. The building and its 7 acres is valued at nearly $72 million, according to property tax records. Of that, $68 million is the value of the building.

If the building or portions of it were to hit the market because of the sale or as a result of employees working from home, some of it could be subdivided for multiple users or be a draw for another large employer, brokers said.

“If PPD has a large block of additional office space to sub-let to another company, then it will provide our economic development people and commercial brokers a large block of existing Class A office space to entice outside companies to occupy within a quick ramp-up time. Many larger cities have nice office buildings with multiple floors available for lease at any given time,” said local commercial real estate broker Hansen Matthews of Maus, Warwick, Matthews & Co., who is also not involved in any potential transaction related to the building.

He said Wilmington has lost out "on some great companies choosing to locate here because we couldn’t provide available space within the time frame they needed for their expansion.

"While it will be wonderful if PPD keeps the building filled with employees, the silver lining to this situation is that some vacancy in that trophy building would provide space for economic recruitment and the city could possibly land another stellar company as a result."