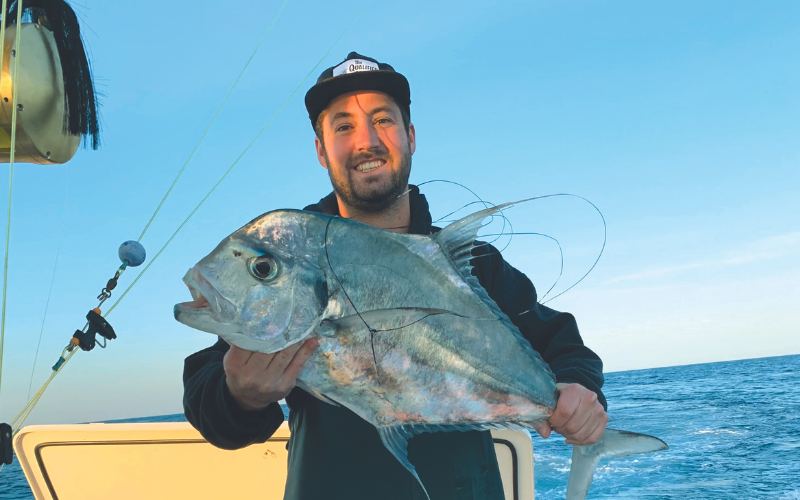 A Wilmington entrepreneur is reeling in the local fishing industry along with restaurants and other potential buyers through Local Catch, a new app.

Landon Hill is the founder and owner of the mobile app that seeks to promote local fishers and make it easier for buyers to find fresh seafood.

Local Catch began as a school project Hill worked on while attending the University of North Carolina Wilmington where he received a bachelor’s degree in entrepreneurship and business development. With his lifelong passion for fishing, Hill said he always knew he wanted to create something fishing related.

“The class was an analytics course, and our final project was to come up with a data-oriented business concept that leverages Wilmington’s strengths as a coastal community,” he said. “I came up with the idea of connecting commercial fishermen with local buyers in their area. I started doing some research and development, calling restaurants, kind of seeing how the industry currently operates and saw a very big need for fresh local seafood, not just from restaurants, but from everyday people, and seafood markets.”

Through these conversations with restaurants, Hill found out that many were getting their seafood delivered frozen from big distributors. This prompted his desire to create a business that would promote local restaurants and support local fishers.

The class professor Xaver Neumeyer liked the business concept and encouraged Hill to consider bringing the app to life.

While Hill pursued a career in real estate after graduation, becoming an agent with Spot Real Estate, he said the idea of Local Catch was still in the back of his mind, so he reached out to an app developer to help build out the product.

With BlueTone Media, a website design company based in Wilmington, Hill was able to clean up his vision for the app and the firm helped create a roadmap for app development that began in 2021. 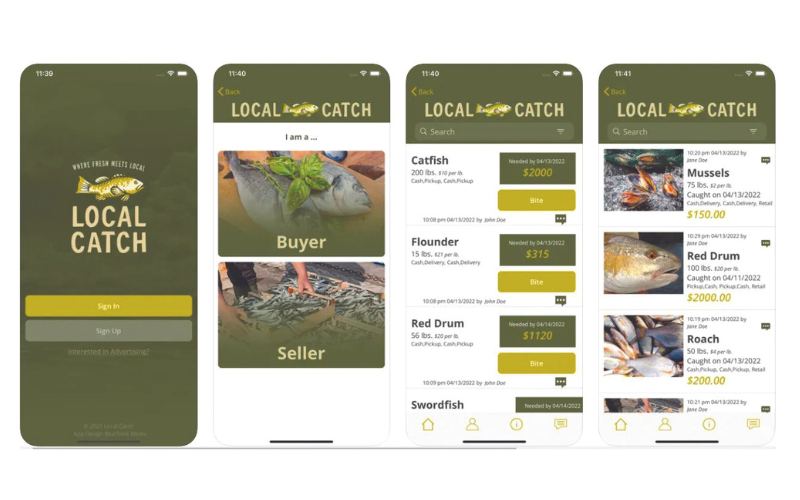 With the app, users can create an account as either a buyer – including restaurants, individuals, seafood markets or dealers – or as a commercial fisher, who would be prompted inside the app to abide by federal, state and local commercial fishing rules and regulations.

Once using the app, sellers can make posts, in what is called “In the Cooler,” about what seafood they have harvested or caught that is ready to buy, alerting buyers in the area on what is available fresh. Interested buyers can directly message them through the app and arrange their transactions or meetups within the app.

Buyers can post requests for seafood by posting a “Cast” for specific products they are looking for and for when. They are then notified if any commercial fishers can fulfill their request.

Currently available for download in the App Store and Google Play, the application is in its testing phase with Hill receiving feedback from early users and launching software updates as needed.

The app currently serves users along the Atlantic Coast from Charleston, South Carolina, to Virginia Beach, Virginia. As part of growth plans, Hill hopes to expand the app to more coastal markets.

“What we want to see this next year is to dramatically expand up and down the Atlantic Coast, and into the next three to five years, even over into the West Coast,” he said.

Currently, the application is free for users. Hill eventually plans on going into a subscription base for dealers in seafood markets.

While growing the business from a school project to a viable product, Hill became aware of all the small details that it takes to launch a product, such as talking to lawyers on the proper wording of terms and conditions. Hill credited the UNCW Cameron School of Business and Neumeyer with helping throughout the development process.

While one of Hill’s aims is to promote sustainability and support local fishers, he said his ultimate goal is for the Local Catch emblem to be recognized by consumers as a representation of locality and freshness.

“Our overall goal is for the name Local Catch and our logo to be a quality standpoint where you can go into a restaurant and see that this item on the menu has the Local Catch logo next to it, showing its quality,” he said. “We know it's fresh; we know it’s local."