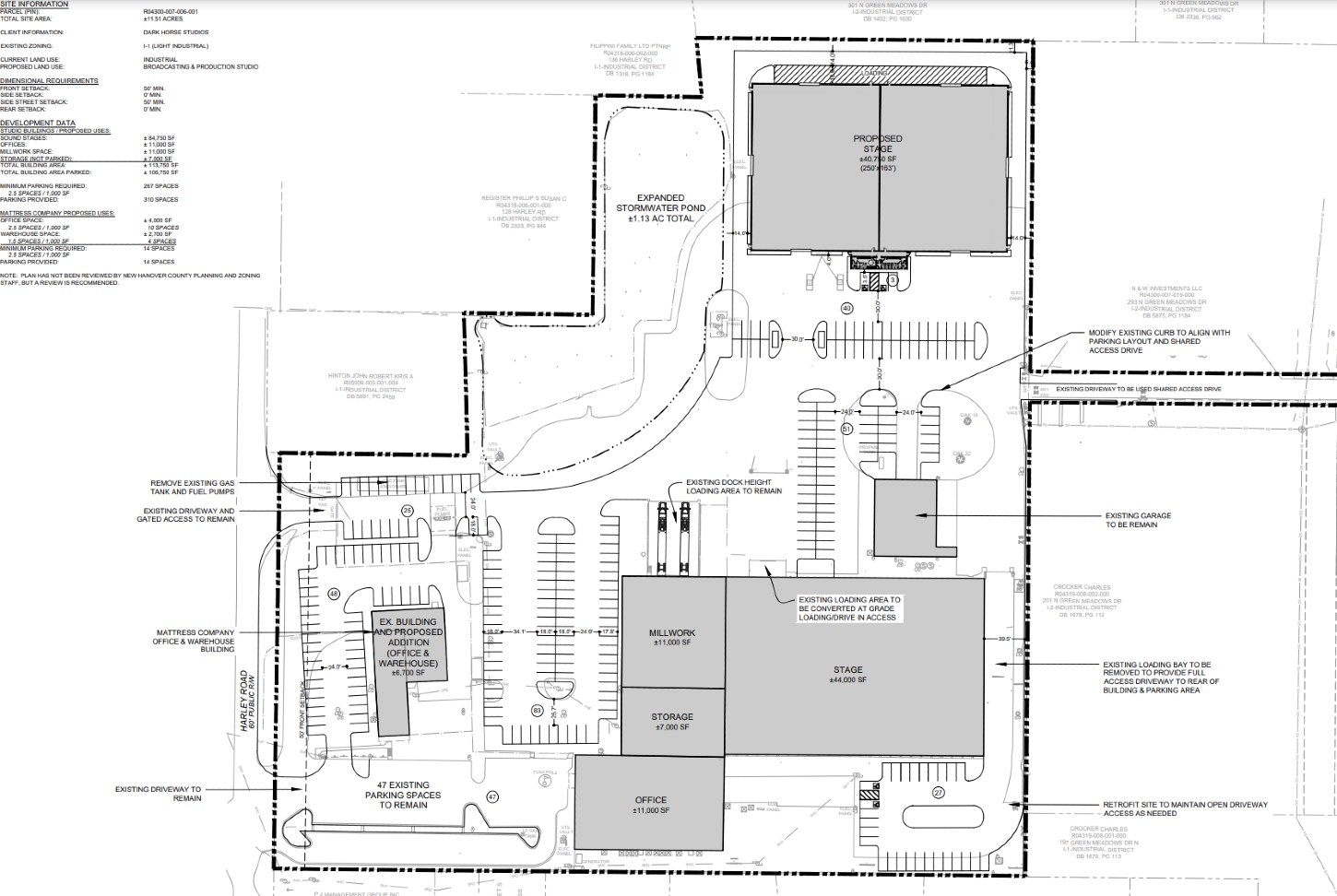 While demand is high for soundstages, Englebright said his business isn't focused on quantity.

"What we really want to do is change the quality. We're hoping to attract large projects," Englebright said. "North Carolina is known for doing a lot of film, a lot of TV, but you don't often see some of the large projects coming in. Atlanta is getting those and L.A. and New York. Our goal was to help slowly transition that to get it to the state of North Carolina."

The new soundstages will incorporate cutting-edge technology, he said, and Dark Horse is spending at least $20 million on the project.

Plans for the Dark Horse Studios additions are expected to undergo a review by the New Hanover County Technical Review Committee on Wednesday. The current light industrial zoning of the plan's 11.5 acres allows for studio space.

Construction on the new soundstages is scheduled to start at the beginning of March, Englebright said. The studio will stay operational throughout the additions and improvements.

Englebright bought the former Coastal Beverage Co. facility off Market Street for $4.8 million in 2019 to develop the space for a health care-related purpose. But as the pandemic spread and with Wilmington's famous EUE/Screen Gems studios booked, Englebright flipped his script.

“We had space listed commercially available, and our local film office realized that our space was very adequate and a good build for shooting film,” he said in a previous Greater Wilmington Business Journal story.

Dark Horse Studios has now been in operation for nearly two years.

According to the N.C. Film Office, 2021 was a record-setting year for film production in general in the state with an estimated direct in-state spend of more than $416 million.

"This is the highest investment since 2000, when the state’s first incentive program began," an N.C. Film Office release stated in March of this year. "In 2021, 71 productions filed official  registrations with the N.C. Film Office for production activities, with filming in all eight of the state’s prosperity zones. Of the 71 productions, 25 projects were awarded future rebates, following an audit and complete project closeout, from N.C. Film and Entertainment Grant program."

In October this year, state officials announced that the Department of Commerce had awarded two new TV and film projects with North Carolina Film and Entertainment Grants (on top of earlier awards) to support productions in several N.C. locations. They included The Supremes at Earl’s All-You-Can-Eat, a feature film adaptation of the novel by Edward Kelsey Moore, which was primarily filmed in New Hanover County.

Showtime series George & Tammy, which filmed at Dark Horse, according to the studio's website, premiered Sunday.

"To date, production companies are estimated to be spending in excess of $275 million" in 2022, the Oct. 21 N.C. Film Office release stated.

While the film industry is currently on a typical hiatus for this time of year, Englebright said Dark Horse is currently communicating with projects that could film next year.

"The whole goal with this major investment for Dark Horse is to keep hitting new heights and records," Englebright said. "There's no reason we can't take some of what we've seen that's taken place in Georgia and help distribute it right here in North Carolina, especially the Wilmington market...It should only grow with additional facilities to accommodate it."