How Brunswick Landed A High-precision Company 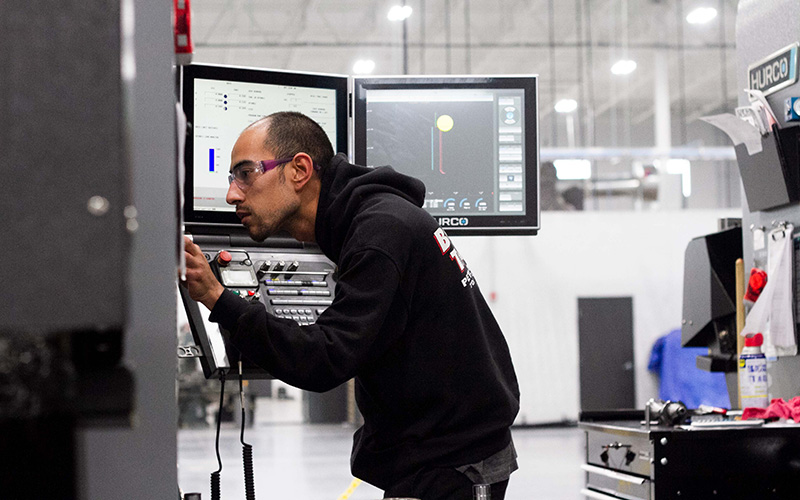 Precision Swiss Products employee Brandon Villarreal operates high-precision machinery in the company's Brunswick County warehouse to produce parts for the medical, aerospace and semiconductor industries. (Photo by Johanna F. Still)
Precision Swiss Products officials had already narrowed their search for a new East Coast headquarters down to North Carolina and South Carolina by the time they arrived in Brunswick County for a site visit.

Headquartered in Silicon Valley, the manufacturing company was looking for a more affordable location to expand its operations, which produce specialized parts for the medical, aerospace, semiconductor, electronics and industrial sectors.

During Steve Dillon’s first trip to the region, the company’s chief financial officer said he was impressed to be greeted by a room full of all the representatives he’d eventually come to work closely with – economic developers, community college officials, real estate developers and state and regional officials. 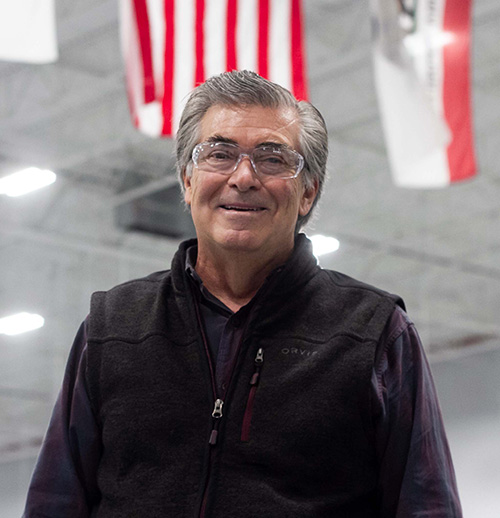 “They had everybody at the table,” Dillon said (pictured right). “Initially, I wasn’t even going to see this megasite.”

These kinds of meetings are organized by Brunswick Business & Industry Development (BBID), which serves as the local point of contact for prospective companies’ site visits. “I have found in my 34 years in economic development, that it is best when you can bring your partners in to answer any questions that you may not be able to answer,” BBID Executive Director Bill Early said.

Construction on the first speculative building in the International Logistics Park of North Carolina, a site that sat dormant for a decade, was several months behind Precision Swiss Products’ initial December 2021 goal to move into a new space. Precision Swiss Products also considered space in the Leland Industrial Park, according to Early, but officials were keen on the ability to lay out the new space to accommodate their specific workflow.

“For the right space, right location and right incentives, we were willing to wait,” Dillon said.

Developed by Cameron Management, Jeff Earp and Windsor Commercial, the speculative building Precision Swiss Products moved into was fully leased before it was completed – an achievement development officials see as a sign of strong industrial demand in the park. In late spring, Precision Swiss Products moved into 50,000 square feet in the speculative building, dubbed the International Commerce Center, and already has a staff of 45.

Through performance-based incentives, Precision Swiss Products is eligible for nearly $1.8 million awarded from the state if it generates 125 jobs in five years; Brunswick County has pledged another $270,000.

In his search for a new location, Dillon considered several states for the company’s expansion and said he quickly ruled out places such as Texas or Nevada, based on cost-of-living, labor rates, taxes and other metrics.

Incentives offerings tend to be more generous in rural areas, according to Dillon, leading the business to refine its search down to Brunswick County; Wilson, North Carolina; and Hardeeville, South Carolina.

The rural location on the Brunswick-Columbus County line is just a 20-minute drive from downtown Wilmington and is even closer to Leland’s urban hub, which offered Precision Swiss Products a healthy mix, Dillon said.

“It was a nice blend of everything we wanted,” he said. Easy access to Wilmington International Airport, which the business’s customers will utilize for site visits, was also a perk, Dillon said.
By next year, Precision Swiss Products will have spent 90% of its 10-year capital investment commitment through its incentive deal with the state, according to figures shared by Dillon. It has already spent over $7 million on equipment and other upfitting fees in just a few months’ time, he said.

“We’ve come in and done what we said we’re going to do,” Dillon said.

In about a year, Dillon said the Brunswick County location will become the new corporate headquarters, and the California space will be utilized almost exclusively for prototyping products that will be manufactured on the East Coast. So far, Dillon said, all overhead costs in Brunswick County – a facility more than twice the size of its California location – are about a third lower.

“I placed the bet hoping they’d be available or displaced in unrelated jobs,” he said. “The bet paid off.”

Another major selling point for the region was Brunswick Community College’s proposal for an apprenticeship program, Dillon said, which officials shared during his first visit.

“We always wanted to do an apprenticeship program and we could never get it to fully happen in California,” said company CEO Norbert Kozar, “so we jumped at the chance when BCC presented it.”

Early said BCC officials had previously expressed interest in implementing more apprenticeship programs, so the pairing with Precision Swiss Products is a good match. “It worked very well putting them together,” Early said. “Brunswick Community College has been an outstanding partner.”

In October 2021, BCC President Gene Smith and Greg Bland, the college’s vice president of economic workforce development and continuing education, traveled to California to see Precision Swiss Products in action. Bland said this step “ensured that we understood the occupational skills and the amazing people that make Precision Swiss Products a successful company; understanding and listening were our first priority.”

This summer, BCC secured a $200,000 grant from the Golden Leaf Foundation to purchase a complex multi-axis machine – the same type of equipment Precision Swiss Products uses on its warehouse floor. This equipment upgrade will expose BCC’s machine technology students “to the production of extremely small, complex and precise metal components that align with our local manufacturing industry,” according to Bland. “A variety of local manufacturers will benefit from this pipeline of young talent.”

BCC has already provided safety training to Precision Swiss employees and is working to refine and enhance its machine technology program. “We see it as a real feeder of talent into our business,” Dillon said. In the coming years, Dillon said he hopes BCC will invest in a robotics training initiative to further support the company’s growth.

The largest share of Precision Swiss Products employees can range in skill set, from fresh out of high school with no experience, to a level-five machinist making six figures, Dillon said. Internal and external training can hone the skills needed, but Dillon said three baseline qualifications – reliability, aptitude and attitude – determine whether someone is a good fit for the job.