QCL Readies For Its Next Stage 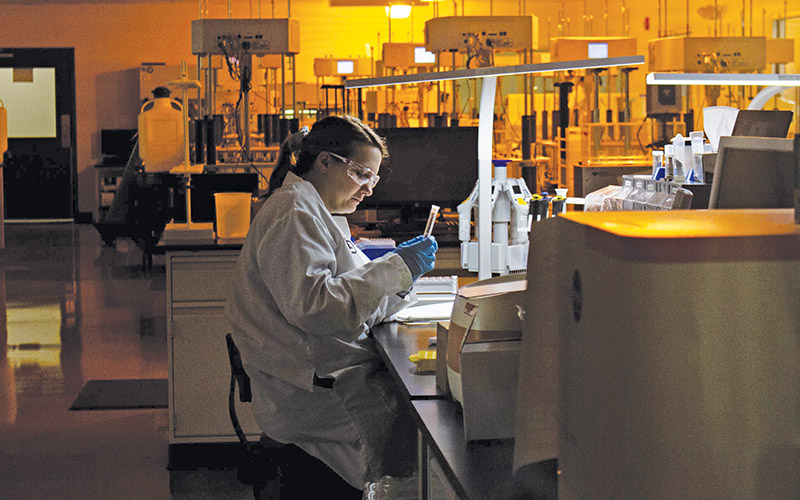 A Quality Chemical Laboratories employee conducts testing at the company’s flagship facility, which is set to double in size with a planned expansion for its sister company, a pharmaceutical manufacturer. (Photo by Johanna F. Still)
Quality Chemical Laboratories is on the verge of emboldening the region’s fledgling pharmaceutical manufacturing scene.

With the impending full-scale (physical) introduction of its sister company, Pyramid Pharmaceuticals, Quality Chemical officials are eagerly awaiting the completion of a new headquarters for the drug manufacturing business.

Yousry Sayed, Quality Chemical’s president and CEO, said he imagines there will likely be a Pyramid Pharmaceuticals sign affixed to the face of the building as it nears completion; this would be the first public- facing image showcased of the company Sayed started in 2005 that has until this point, mostly existed on paper.

Sayed, who holds a doctorate in chemistry from the University of Minnesota, said he’s known he wanted to dive into the manufacturing end of the business for years, specifically to meet shortages for high-demand products.

“We’re hoping to get one product approved this year,” Sayed said of a generic version of a product Quality Chemical started work on around 2017. “A lot of injectables now are very hard to come by. There is just an area of need for some of these injectables.”

The sprawling campus would be the first commercial-scale pharmaceutical production facility in the area.

Sterile manufacturing facilities are exceedingly expensive and complex to design and operate, according to company officials, given the high barrier to entry and steep regulatory protocols.

This complexity helps explain why about half of the facility’s roughly $110 million expense is wrapped up in equipment and validation costs.

Two robotic filling and closing systems are set to be installed at the new facility. Barrier isolator technology paired with contained robotic systems helps reduce or eliminate human interference, which is a persistent threat to sterility.

Both filling lines will feature similar capabilities, one more compact, one larger, with each featuring the ability to freeze-dry and the flexibility to work with different sterile injectable containers – providing unrivaled capabilities for small-batch aseptic processing, according to Barron.

“Our new building, new systems, and sophisticated new equipment adds a valuable capability that will allow us to serve our clients by providing services from testing and validation through product development and manufacturing, all on the same campus,” Sayed said.

On the construction side, extensive work by McKinley Building Corp. on the new campus is expected to wrap by early next year, according to Brian Dineen, Quality Chemical Laboratories’ facilities engineer.

All parties have used as much local labor as possible on this elaborate endeavor.

“Their project manager, Chad Hodges, has been an important team player with us and has helped in overcoming issues during difficult pandemic times, inflation and supply chain challenges,” Sayed said.

Once in action, Pyramid Pharmaceuticals will function as a full-scale contract development and manufacturing organization (CDMO) to aid in the company’s expansion and diversification into the parenteral (nonoral drug administration) realm.

So far, Quality Chemical’s reputation has been built on the testing side of the pharmaceutical equation, serving the world’s largest drug producers as repeat clients.

“We could add like 60 people today if we could find them. We’ve got enough work to do,” Sayed said.

In addition to existing labor needs on the existing testing side, the new facility could staff about 190, according to Sayed. The staff has more than tripled over the past decade.

“Biopharmaceuticals is an important industry with bright futures for those who work for it,” Barron said. “There are career-building jobs for high school graduates with good attitudes, attention to detail and willingness to learn on the job. There is also a strong need for people with community college tech degrees as well as science-based bachelor and advanced degrees.”

The business could take on a higher volume of work – there’s certainly demand for it – if workers were more readily available, he said.

“We could do more projects, but we would never take stuff that we know we can’t do within the timeline the client expects – they would want it done yesterday… In this business, you’re going to be very clear, because the timelines are very important.”

Like many employers amid the tight labor market, Sayed said Quality Chemical has had to raise wages to try to attract talent.

“It’s very competitive,” he said. Through his engagement with local educational institutions, Sayed has advocated for streamlining of work-related certification programs (Sayed is a sitting trustee and former professor for the University of North Carolina Wilmington).

Programs – for all industries, not just pharmaceuticals – ought to be trimmed down and cater to on-theground work of specific careers, Sayed said.

Venturing into the manufacturing end of business would not have been possible without revenue generated by Quality Chemical’s existing base.

“We could not have done production and manufacturing without having the core business that will support the manufacturing. When you start fairly small, then you’ve got to build the steps to go up,” Sayed said.

Later on, Sayed said Pyramid’s success might even eclipse that of Quality Chemical. “Who knows?”

Correction: This article has been updated to correct Yousry Sayed's educational background.