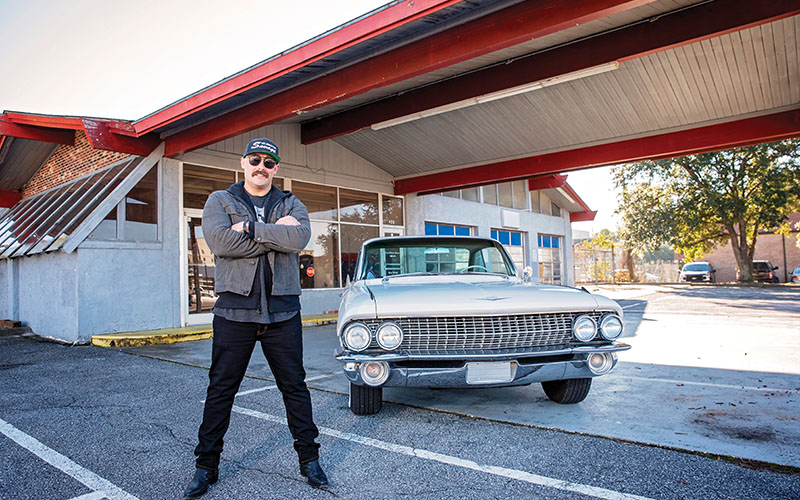 Joseph Apkarian, owner of the Pour House and co-owner of Taco Baby, is opening The Eagle’s Dare, a cocktail bar and beer garden, at 420 N. Third St. (Photo by Michael Cline Spencer)
In a scene that could have come straight out of local history, the 1961 Cadillac eased into the parking lot at 420 N. Third St., the mid-morning sun reflecting brightly off the body. With the early January sun still traveling low in the sky, its reflection off the pearl-white Coupe deVille was blinding at times.

That didn’t stop passing drivers from staring or a few pedestrians from stopping to check out the classic car. At nearly 19 feet long and with sharp tail fins that seem to go on forever, the Caddie was hard to miss.

And it fit right in on the southeast corner of North Third and Red Cross streets, the now-vacant home of a former Esso station that by early this summer will be The Eagle’s Dare, a bar and beer garden that is the latest venture of Joseph Apkarian, owner of the Pour House and co-owner of Taco Baby.

In 1961 – the year the Coupe deVille came off the assembly line – Walter H. Nunalee operated the gas station and garage at 420 N. Third St. In the 1960s, few places sold just self-service gasoline – there usually was an attendant to pump the definitely leaded gas, wash the windshield and check the oil.

It’s not clear what year the current building was erected, but the architecture suggests the mid-1960s. As for the spacious corner lot, Hill’s City Directory shows an Esso station there as far back as 1938. In 1971, the building was Cape Fear Esso. It’s not immediately clear when the last gas was pumped at the location. (Apkarian is leasing the space from Two Farms, Inc., a Maryland-based company that operates gasoline and convenience stores. The site has a clean environmental slate, he said.)

Last week, Apkarian scurried around like the station attendants from 1950s movies. But instead of pumping gas, he was helping stage a photo shoot and talking with a reporter, first under the giant awning of what will be the Third Street facing beer garden, and then inside the extra-tall, extra-spacious interior – two distinct sections: one for a main bar and one that can serve as an event space.

Apkarian loves running the Pour House and Baby Taco, but he’s obviously a bit of a history buff, especially of an era in which downtown was dotted not only with service stations, but also with most of the city’s auto dealerships. In the ’50s and ’60s, downtown Wilmington definitely was more blue-collar than boutique, full of Atlantic Coast Line employees, repair shops of all types and even a smattering of small manufacturers.

It’s a Wilmington era that, Apkarian believes, deserves to be remembered. And one that, with the help of architect Rob Romero, Morgan Dail of Deeply Rooted Interiors and brand designer David Hitchcock, he hopes The Eagle’s Dare will evoke.

Since its service station days ended, the building has hosted several other businesses that could make use of the large space and multiple bay doors, among them Windshield Glass of Wilmington. And as compelling and versatile as that 4,000 square feet of interior space appears, Apkarian is just as excited about outside – an extra-large lot for a downtown bar and, with the building set in the back, an outdoor space that will rival that of the old Icehouse on Water Street, at least in size.

The bay doors have seen better days and will be replaced, but Apkarian doesn’t think they’ll be seen that often anyway.

“During like, what, nine or 10 months of good weather we have here, those bad boys will always be open.”

For the cold days and nights, Apkarian plans outdoor heaters.

“It’s our intent to be a year-round bar,” he said.

Dressed in black denim pants and subtly stylish cowboy boots, Apkarian was bustling with energy as he gave the nickel tour of the still-barren space, which is surprisingly clean and structurally intact for a 60-yearold auto shop. Although Romero is working out the details and providing vision, Apkarian obviously is helping guide the transformation that will be underway soon, with a Memorial Day opening in his sights.

But he’s a businessman, too, and knows energy and vision will go only so far. So in addition to the fun he’s clearly having with the project – not many business owners bring an antique Coupe deVille to a photo shoot, right? – Apkarian’s also diversifying his business portfolio.

A former Marine Raider, Apkarian was working overseas for FEMA and the Department of Homeland Security during the early days of the pandemic.

In addition to being a bridge to Wilmington’s past, Apkarian sees The Eagle’s Dare location as bridging two parts of modern Wilmington – the traditional downtown commercial area with the Brooklyn Arts District and northern waterfront area.

From Soda Pop to Cargo, he believes the emergence of districts in Wilmington is a sign of a growing, vibrant city. But as for a potential name for his new neighborhood, Apkarian said he’s not given it much thought.

“You can call us whatever you want,” he said. “Just come drink beer with me.”