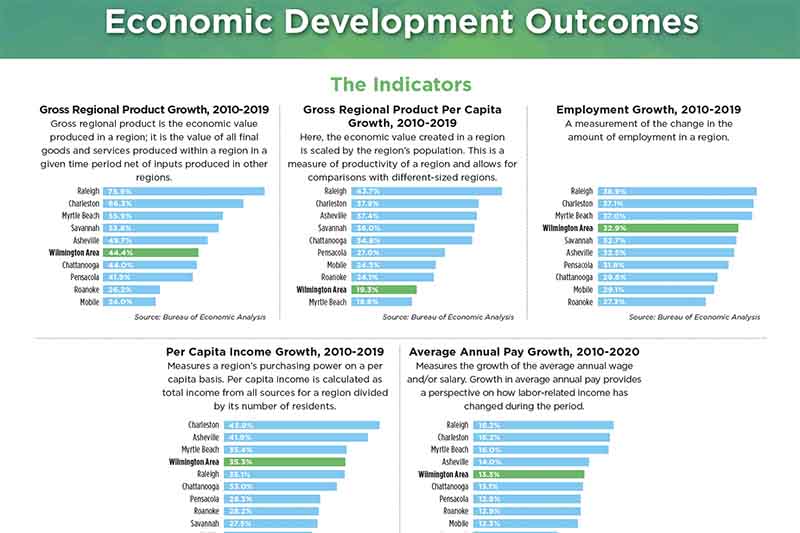 The Wilmington region, which includes New Hanover, Pender, and Brunswick counties, has experienced strong economic indicators stacked up to its comparative cities, according to the 2021 economic scorecard. (Courtesy of the Wilmington Chamber of Commerce)

Quality of place indicators have remained consistently strong in the Wilmington region, but per capita gross regional product growth has lagged over the past decade, pointing to an over-reliance on low-paying jobs, according to annual economic snapshot for the region released Wednesday. However, there are signs the region is growing out of this mold, the report outlines.

The Wilmington Chamber of Commerce released its 2021 economic scorecard in a breakfast event at the Aloft Wilmington at Coastline Center Wednesday, intended to serve as an objective take on the region’s economy. As the fifth in-depth check-in since the chamber launched the project in 2015, the scorecard examines and compares the Wilmington region through the lens of economic competitiveness.

It’s based on mostly old data, or as University of North Carolina Wilmington’s regional economist Dr. Adam Jones described, “B.C.” –– before COVID, though some reference points do incorporate 2020 figures.

Still, research and analysis take time, and a backward view with lagging data is common in an economic analysis of this scope.

With research conducted by Jones and the UNCW Swain Center, the data reflects trends in New Hanover, Brunswick, and Pender counties. It compares the Wilmington region’s economic indicators with that of seven comparative locations, including Asheville, Myrtle Beach and Savannah and two aspirational cities – Raleigh and Charleston, South Carolina.

Jones said his big takeaway is the region has consistently maintained a “slight edge.”

“Most of the numbers are trending in the right direction. And we just sort of keep incrementally moving up,” Jones said in an interview after the presentation. “Every year, we just keep making the next little step forward. That's a big difference over a long period of time.”

Compared to the peer and aspirational cities, the Wilmington area’s gross regional product growth and average annual pay growth over the past decade ranked 6th and 5th, respectively. Per capita income growth and employment growth both came in 4th, while gross regional product per capita growth was the weakest indicator, at 9th, growing 19.3% between 2010 and 2019. This suggests that the community is growing, Jones said, but the effects of the economic value produced are somewhat diluted over the entire population.

Average annual pay growth could appear artificially strong, at 13.3% between 2010 and 2020, Jones said, because it includes pandemic data when lower-wage jobs were excluded due to COVID-related restrictions and layoffs. However, new data from this year – which has seen significant wage growth in low-paying sectors – could even out the trend, Jones said.

Businesses might hesitate to increase wage growth to match inflation until they can find a way to ensure productivity will rise, Jones said. As employers toy with new hybrid work models, a productivity experiment is playing out in real time. Recent boosts in lower-wage labor could meet or exceed inflation, while middle-tier jobs may not be keeping up, he said.

“We're probably not going to move up on everything every year. That's an unrealistic ask,” he said. “But the general trend is overall improvement … faster than our peers.”

The largest gain among the indicators Jones studied was within the innovative activity index, which puts Wilmington in 2nd among the cities looked at, a large jump from 2010. This segment was carried by the federal health and science funding category (one of four figures used to arrive at an indicator score), showing the Wilmington region at 125% above the nation’s average. Roughly $200 million in pandemic-related research funding awarded to PPD “almost exclusively” buoyed this indicator, Jones said.

Other healthy scores can be observed in the region’s human capital index; Wilmington had strong ranking placements for the presence of “knowledge workers” employed in specialized industries, high school and college graduates.

“We do pretty well on retaining an educated workforce,” Jones said, noting that over the past few years, the “knowledge workers” category had taken a slight downturn. “That’s since turned a corner and started increasing again ... What that looks like to me is Wilmington is sort of crossing over into this next level of city in terms of talent attraction [and] business attraction.”

The region was weak in traded sector employment, an indicator that measures business activity by which a community receives revenue from outside the region. This category will always track on the weaker end, Jones said, as most tourism spending is not categorized within the traded sector, even though it really ought to be. “We don't want to harp on it and hammer on it too hard,” he said.

At the scorecard unveiling, Jones moderated a panel of economic development leaders, asking them to reflect on what the region needs. Both Scott Satterfield, CEO of Wilmington Business Development, and Natalie English, the chamber’s president and CEO, focused on infrastructure.

“Infrastructure is not an incentive, it is an essential utility to land projects,” Satterfield said, later pointing to recent growth along U.S. 421 following investments in public utilities.

Diversification of the region’s industries – the reason for WBD’s 1956 formation, arising out of an over-reliance on the Atlantic Coast Line Railroad, which had then relocated out of Wilmington – will remain at the forefront of recruitment efforts, he said.

English said her “singular focus” in the coming year would be to get a replacement for the Cape Fear Memorial Bridge, an effort that has floundered amid state transportation funding shortages. Prospective companies don’t care about municipal boundaries, English said, and it’s imperative that the region secure a reliable New Hanover-Brunswick County connection.