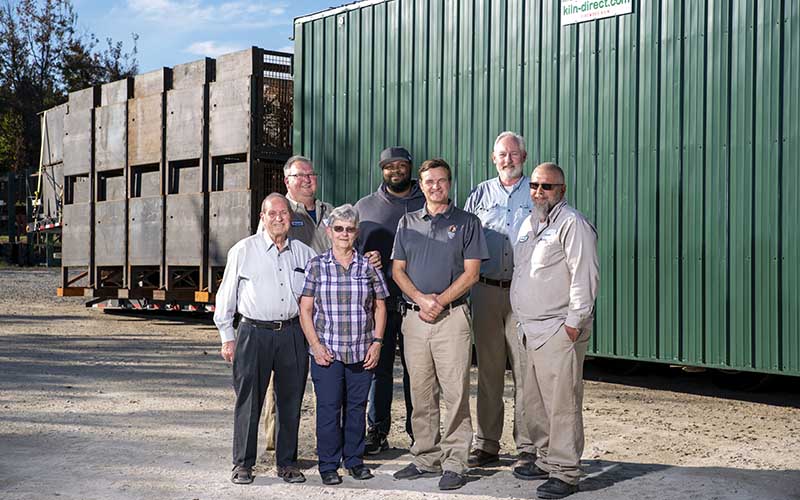 Valde (front row, from left) and Helle Jorgensen, Niels Jorgensen, Brian Hawk (back row, from left), Anthony Hayes, Maury Wilkinson and Shawn Murdock make Kiln-direct in Burgaw a player in a niche market. (Photo by Michael Cline Spencer)
Kiln-direct is a mighty player in a small niche market. And that’s more than okay. The company, which sells heat-treating kilns for wooden pallets, firewood and lumber, has a staff of 50 and annual sales of $11 million to $12 million.

Niels Jorgensen, Kiln-direct’s founder and owner, is the primary force behind the company’s success. Jorgensen is a forward-thinking strategist who continually develops new products to meet the changing needs of the forest products industry, improves the company’s existing products and works to provide outstanding customer service.

“All of our lines are continually rejuvenated so that we stay ahead of potential competition,” said Jorgensen. “I’m always on a quest to make better products and compete, even if the competition is against ourselves instead of another company.”

Though working with lumber is in Jorgensen’s blood – his grandfather owned a sawmill, which his father took over and expanded with wood-drying kiln products – Jorgensen had no intention of following in their footsteps.

But life has a way of changing plans. When Jorgensen traveled to the United States as a foreign exchange student, he decided he’d like to make his life here. He used his specialized knowledge of the lumber business to land his first job in America at a sawmill outside Burgaw.

After three years, Jorgensen decided that working for himself was his path forward, launched Kiln-direct and became a U.S. citizen. The fledgling company, which Jorgensen located in Burgaw, got off to a rough start. It was selling parts for kilns, but customers weren’t interested.

That was the impetus for Jorgensen to develop his first product. It was a dip tank to treat lumber, and its sales kept the company going.

In the early 2000s, the industry turned in a different direction and so did Jorgensen. A new regulation mandating that all wood pallets used in export shipments be treated by heat to kill insects was the inspiration behind Jorgensen’s next product, a pre-assembled heat kiln that dries pallets fast. It was these units that made Kiln-direct a contender in the forest supplies industry. The company captured 70%-80% of the market share and became an industry leader.

For Jorgensen, Kiln-direct’s success was no reason to rest, and new product development and improvement of existing products continued unabated. Kiln-direct’s product line grew to include a small unit that dries lumber for cabinet shops, six models of pallet and small lumber kilns, and a faster way to dry firewood.

Recently Kiln-direct upgraded its products so their cycle times are faster and they include touch-screen computer controllers. The company is also anticipating future demands by developing kilns that use biomass fuels instead of fossil fuels.

Another component of Kiln-direct’s success is customer service. Jorgensen said sustainability is an essential part of customer service and that ensuring customers can run their existing kilns is as important as selling new equipment. In addition to providing technical support and updating software to keep older kilns functioning, Kiln-direct also provides parts for old systems.

“That means my service department team has spare parts so customers can run their units for decades to come,” Jorgensen says.

Jorgensen’s long-range thinking has also kept Kiln-direct in the black when catastrophic events like Hurricane Florence and COVID occur. Damage from Hurricane Florence made production at Kiln-direct’s manufacturing plant impossible for three weeks, but the company parked a full-service van at another site and continued to fill orders and respond to customer requests.

COVID posed a different challenge. Rather than accepting federal funding to keep the company going, during COVID’s early days, Jorgensen planned to pull from the company’s building fund. In the six weeks that business slowed, Kiln-direct caught up on its backlog and employees worked on internal projects. Then, the surge in buying brought a critical need for pallets, and business picked up.

Jorgensen said the company’s success would only be possible in a free-market system.