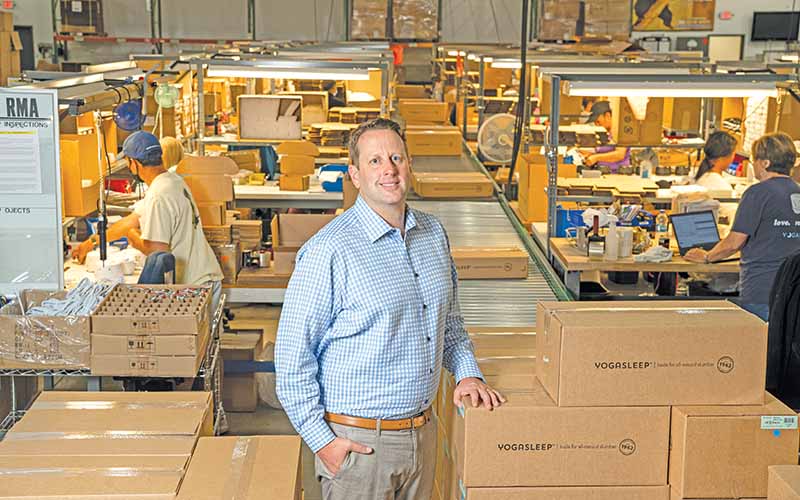 They’re having trouble meeting immediate job needs to round out recovery and grow as they emerge from the constraints of the COVID-19 pandemic. And in the long run, many company leaders are starting to wonder what the future holds for open positions.

“We are hiring more outside of North Carolina than we have in the past,” said Michael McManus, CFO of Wilmington-based Yogasleep, a maker of nationally sold, fan-based sound machines. “I believe the entire job market right now is very tight from a talent recruitment standpoint.”

In the world of manufacturing, however, improving the workforce situation may not lie just in COVID recovery efforts; nor is it as simple as reeling in the right talent, says a recently formed local manufacturing partnership made up of several industry leaders, including McManus.

Many companies are also seeking the next-generation hire looking for a long-term career in manufacturing before the lion’s share of the current workforce retires.

To address such key issues, a group of 27 manufacturing executives have come together to form the Cape Fear Manufacturing Partnership.

Barton, whose firm is part of the new manufacturing partnership, said the business is at least two months behind production and cannot find the workforce it needs to ramp up operations.

“I’ve been at the company 31 years, and we’ve never had a problem getting workers,” he said.

The company has about 100 employees, with 50 performing kit assemblies. To help with the company’s immediate work, Tri-Tech could hire another 25 employees for production, he said.

Barton hopes that the employment issue will resolve itself in the next few months as society continues to open up and with the timing out of the additional COVID-19 unemployment assistance that seems to be keeping some of his workers from returning to the production lines, he said.

Nationally, about 1.4 million manufacturing jobs in the United States were lost during the early days of the pandemic, according to the National Association of Manufacturers (NAM). And while the industry has recouped about 63% of those, NAM reports that about 570,000 remaining jobs were left to fill at the end of 2020.

In April 2020, the Wilmington MSA manufacturing labor force was down by 13.3% from that month the year prior.

Still, even setting the pandemic aside, manufacturers are finding it difficult to recruit certain positions, McManus said.

“We do have challenges with identifying and finding talent locally for specific roles,” McManus said.

The company does hire outside the region, usually for specific work surrounding e-commerce and other elements of commercial expertise, he said.

There are about 40 people working full time in Wilmington at Yogasleep, making up about 70% of the company’s entire organization. The company also has offices in Richmond, Virginia, and Austin, Texas.


With more specialized roles coming through manufacturing advancements and new technologies, opportunities in the sector are growing. But getting the people to fill the jobs could be problematic in the future.

“A lot of us will be aging out of this over the next 10 to 20 years, and we need to line up succession,” said Jim Flock, general manager of Leland-based aviation and aerospace parts manufacturer HSM Machine Works. He is chair of the Cape Fear Manufacturing Partnership.

“If we’re going to succeed as a company over here, one of my priorities is to train and identify somebody who can eventually replace me,” he said. “And I’m sure I’m not the only one.”

There are 2.1 million unfilled manufacturing jobs anticipated by 2030, according to NAM.

“The cost of those missing jobs could potentially total $1 trillion in 2030 alone,” states a NAM report.

A survey by NAM indicates that among its respondents, attracting and retaining a quality workforce is one of the biggest challenges facing the sector in the United States.

“Historically, in this country, the middle class has been driven by the so-called blue-collar jobs that we feel that society has minimized and pushed to the fringes. Additionally, corporations are taking the approach of sending a lot of this work overseas,” Flock said.

He said the local partnership, which started meeting last fall, is the first of its kind for the region and aims to highlight manufacturing as a viable long-term career path in Southeastern North Carolina. The group represents the area’s varying industries and wide range of locally manufactured products.

The partnership group aims to make an impact by getting into the local education system, starting at middle school, to speak to students and parents about the different manufacturing jobs and wages. It also aims to change the public perception of manufacturing labor.

Turning to the area’s school systems early could help change the stigma around manufacturing, which is often viewed as a dirty line of work with little mobility, Barton said.

“I think the last generation or two has had this mentality that it’s college or bust,” Barton said. “The real intent of this group is to educate the younger generation about the opportunities within these manufacturing companies. You can have a pretty successful and rewarding lifelong career in the industry.”

The partnership network alone represents the many different types of businesses with varying lines of work, including machinists, programmers, engineers and upper management positions, Flock said.

“We have a wide range of people,” Flock said. “So, if you’re not making airplane parts, you could be making guitar parts, food products or working at General Electric doing nuclear or aviation work, similar to what we do here at HSM.”

Salary ranges in the area are also becoming more competitive, he said.

There are nearly 20 people working at HSM, where employee wages range from $10 an hour as a trainee up to about $150,000 in upper management positions, Flock said.

“Our typical machinist is somewhere in the neighborhood of mid $20-an-hour range right now. And that’s been gradually going up,” Flock said.

But HSM and others in the partnership want to find people who are in the market for a manufacturing career.

“I’m looking for somebody who wants to come in, learn their craft and grow as an individual, as a professional, and help the company to grow as well,” Flock said.

The partnership has created a logo and website and continues to add manufacturing members, as well as mold its objectives.

“This is a long-term project for me. I don’t see this ending in three to six months. This is something that’s going to take a while to change the mindset, to activate all these things, and to get all these programs and activities that we’re talking about doing in place,” Flock said. “Manufacturing may not be a significant part of the local economy, but it will be an important part of the local economy. And the people that get these jobs in our organizations are going to be very well compensated.”