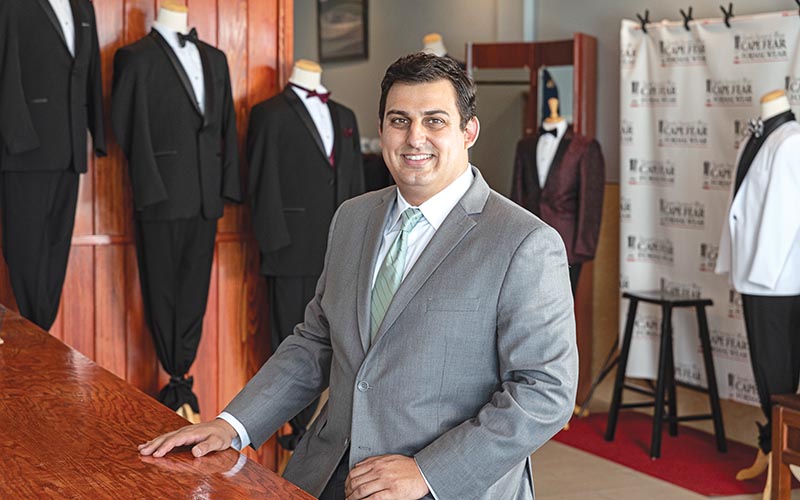 George Hanna recently bought Cape Fear Formal Wear. Hanna, who owns Bernard’s Formalwear in Durham, says he is seeing demand increasing as more events and weddings come back online. (Photo by Michael Cline Spencer)
During a year of going almost nowhere, most people in the Cape Fear region found their clothing could be simple and informal. Galas went online; special events were canceled; Zoom meetings required attendees to look good only from the waist up.

The combo depressed the market for two industries: formal wear and dry cleaning.

After hanging on for months with little demand for wedding, prom and party attire, Cape Fear Formal Wear owners Jason Sellars and Chuck Ogiba sold the business last month to one of their suppliers, George Hanna. Hanna, who owns Bernard’s Formalwear in Durham, saw opportunity despite the downturn.

“We at Bernard’s were the main suppliers for Jason,” Hanna said. “He used our warehouse. We’re sad to see him go but think Wilmington has great potential for us. I am a North Carolina native and used to come to the beach growing up.”

Bernard’s has used a variety of strategies to survive the near-lack of business during the past year, according to Hanna.

“We did what we could with reduced, micro- and streamed weddings,” he said. “We relied on those to keep us going. We tried everything we could to make ourselves available, but we had to shut down for several months. When we came back, we came back with reduced hours and required customers to make appointments rather than walk in.”

The business also tried to control its expenses, and obtained both a Paycheck Protection Program loan and an SBA Economic Disaster Loan, which allowed it to keep paying its staff.

Spring is typically wedding and prom season, but last spring was a bust, Hanna said.

“People were shocked at how aggressive COVID was. We shut down for a couple of months. But [over the past year] people have learned how to have events safely. There are more socially distanced events, more events with masks, so people can still celebrate while staying safe.”

With the proliferation of outdoor events, Hanna said his businesses were marketing to that trend.

“It’s definitely been a challenging year but we’re coming through it, and we see recovery on the horizon,” Hanna said.

Also looking at a brightening future is Theresa DiBernardo. The owner of The Dressing Room in Wilmington says that business is definitely picking up, although she has continued to sell wedding gowns and bridal party dresses through the pandemic.

“Weddings were still happening, but they were smaller,” DiBernardo said, adding that that reality may have played into her shop’s niche.

And the phone is starting to ring more often at Cape Fear Formal Wear and Bernard’s.

“Summer’s looking good; fall is starting to look good as well,” Hanna said. “Even for late spring, like May and June, we’re getting some orders. Tuxedo and suit rentals are usually more toward the end of people’s to-do list, so we’ll see a lot more fall reservations coming this summer. I’ve talked to some event spaces and they are optimistic about summer and fall; they are already starting to fill up.”

For dry cleaning establishments also, the return of formal occasions would drive an uptick in their business, as would the return of white-collar workers to their offices, leaving their sweatpants at home. Before the pandemic, dry cleaning was already seeing a decline because of a trend toward more casual attire in the workplace and the advent of easy-care fabrics.

Bloomberg reported Nov. 25 that, of the roughly 30,000 dry cleaning companies in the U.S. before the pandemic, one in six had declared bankruptcy.

Hangers Williams Dry Cleaners, which formerly maintained seven locations in New Hanover County, is down to three, according to co-owner Lori Williams, who’s currently managing operations along with her brother-in-law.

“Some customers who use us on a regular basis and could afford it started bringing in household [linens] for cleaning. They kept us alive,” Williams said. “We kept our pickup and delivery service, although that dwindled. We cut our hours way back and reduced our production to once a week. One of our stores that did church business saw that dwindle to nothing.”

The family-owned business, in Wilmington since 1941, also received a PPP loan last spring; Williams said in late March she was still considering applying for a second draw loan.

“I was hesitant about doing it at all, but you do what you have to do,” she said.

Things are looking up. Williams sees an increase in walk-in customers and in route pickups. The volume of work is on the rise.

“We do all the high school JROTC uniforms, and with the film activity picking up, we’re doing their wardrobe and their linens. We just got an order for cleaning jump suits from the Department of Corrections.”

At this point, however, Hangers Williams doesn’t plan to reopen its closed locations, Williams said. “We’ve sold those four buildings, but we could eventually reopen in different facilities in those areas. We hope things will continue to improve.”