Six Months Of COVID: How Are Businesses Faring? 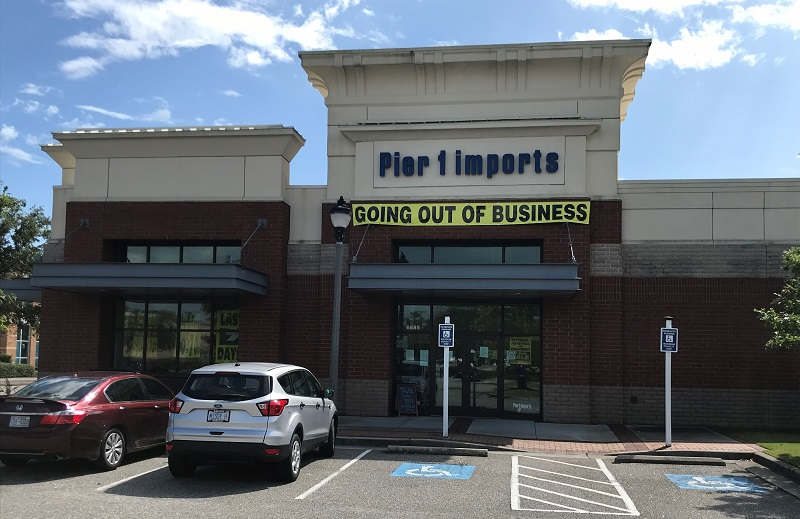 Pier 1 Imports is one of several national chains in the area set to shutter due to the impacts of the coronavirus on business. (Photo by Cece Nunn)
It’s been six months since COVID-19 began infecting the North Carolina economy. On March 14, N.C. Gov. Roy Cooper announced that K-12 schools were to close, the first of several measures aimed at preventing the spread of the coronavirus.

The ensuing half-year has seen businesses deemed nonessential close and then reopen with restrictions. Restaurants and bars were required to shut down in mid-March, and while establishments that serve food have been allowed to resume operations in phases, bars are still shuttered.

“Everybody has had to get creative,” said Jesse Davis, owner of The Penthouse, a private club atop the Trust Building in downtown Wilmington. “I have had to reinvent my business, thinking about what I can do that’s legal.”

Last week, Davis communicated with his members that the space is now open from 9 a.m. to 5 p.m. as a private office lounge for them and their guests. Coffee and tea are available for purchase, as are several types of Penthouse merchandise he recently stocked. He’s hoping the concept will catch on. Still, he feels it’s time for bars to be allowed to open their doors, even with restrictions.

This past six months has been a mixed bag for area businesses, Natalie English, president and CEO of the Wilmington Chamber of Commerce, said in an email Monday.

“We are hearing from some of our members that they haven't missed a beat. Their employees quickly moved to remote work and they have continued providing the good or service their customers wanted. Others, in the health care, technology and logistics sectors, have seen phenomenal increased demand in their good or service.”

English says her concern is for small retail and hospitality-oriented businesses like Davis’s.

“Some have created new online- or social media-based processes that have allowed them to continue to do business. Others haven't been able to make the transitions necessary to keep staff employed,” she said. “And still more haven't been allowed to open – or to open enough – and they are struggling. The ripple effects will be felt for a long time to come in the form of commercial real estate, jobs, etc. Those businesses need the next version of the Paycheck Protection Program to be adopted by Congress. The regulations for forgiveness must be simplified.”

That ripple effect is noticeable in Mayfaire Town Center, which has lost several national retail chains that have closed stores permanently. Among the casualties are tween clothing purveyor Justice as well as New York & Co., whose parent, RTW Retailwinds, has filed for Chapter 11 bankruptcy and plans to shutter most of its stores.

Hanover Center will see increased vacancy as well, with the Chapter 11 bankruptcy filings of two national retailers, Pier 1 Imports and Stein Mart. Both chains are closing all stores.

Some restaurants have not been able to adapt to COVID sufficiently to stay afloat. At Mayfaire, chains On the Border and, most recently, Ruby Tuesday’s, have fallen victim to the pandemic economy. Add to that two locally-owned eateries that have closed: South College Deli and Peño Mediterranean Grill.

Reflecting English’s “mixed bag” assessment, however, the area has seen several new restaurants open during the pandemic. One of these is Eggs Up Grill, which debuted its first Wilmington location just before the COVID shutdown. Co-owner Mary Ashton Dukes said in late August that, as a new restaurant, Eggs Up Grill found it difficult to survive on carryout alone during the shutdown.

“Since reopening, we have continued to build more business with takeout, online ordering, and delivery,” she said in an interview with the Business Journal. “Guests can place orders through our website or the Toast Takeout App. We also partnered with DoorDash.”

The pandemic will not affect Dukes’ franchise plans to open five additional Eggs Up locations in the region, she said, but it is influencing layout plans.

“As we look for real estate for our future restaurants, we are putting a bigger emphasis on patio dining and even considering options like a takeout window," she said.

Restaurants and other employers in the hospitality industry may be hiring again, but some jobs in other industries may be gone altogether, English noted.

“For individuals who have lost jobs that may not be coming back, we are encouraged by the growth in the sectors I listed earlier [health care, technology and logistics],” she said. “Our education partners are developing programming to assist with the up-skilling needed for those jobs. The Cape Fear Talent survey we developed in partnership with Cape Fear Collective provides a roadmap for how we can assist companies with their growth plans and individuals with new career paths.”