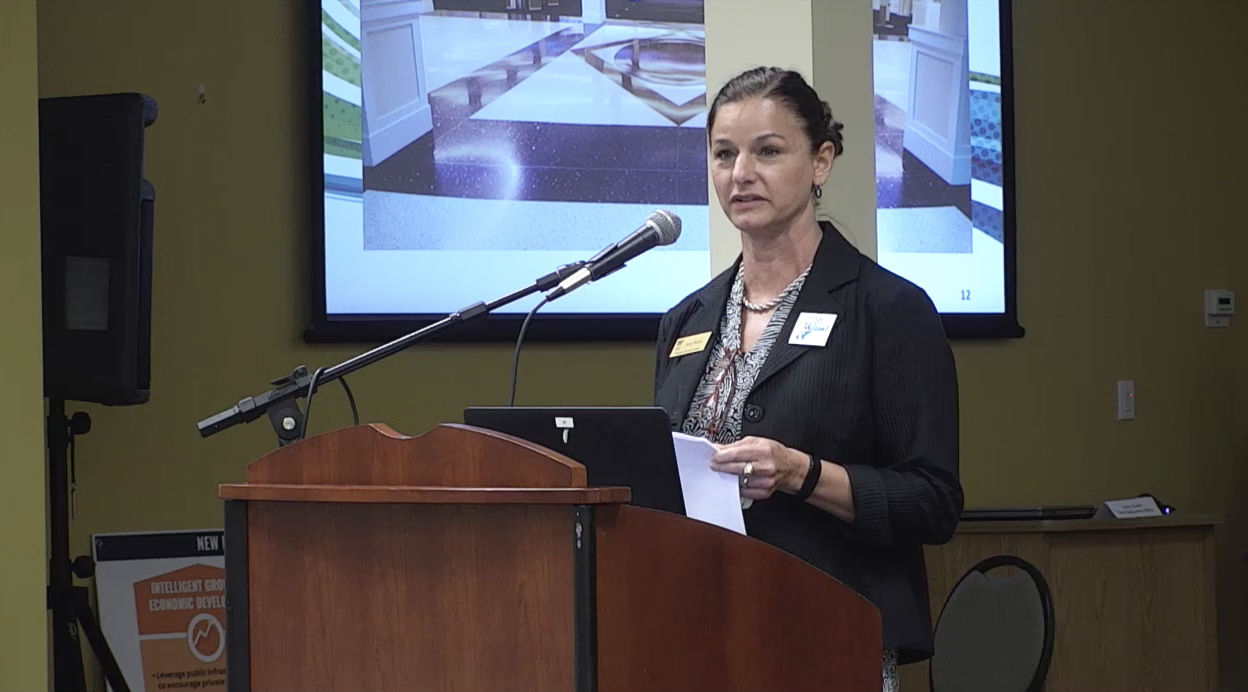 Wilmington International Airport Director Julie Wilsey gives a presentation Monday morning to the New Hanover County Board of Commissioners that included an update on the airport and its outlook for the future. (Screenshot courtesy of New Hanover County)
Wilmington International Airport officials are focused on getting ILM’s numbers back up to pre-COVID-19 levels, according to an airport update Monday.

They previously set a goal to increase seats and schedules by 50% and announced by the end of July that they had reached 40%, according to ILM director Julie Wilsey, who gave a presentation to the New Hanover County Board of Commissioners on Monday morning.

The presentation focused on the airport’s operations this year to date and looking ahead to the 2021 fiscal year.

Wilsey started off Monday’s presentation on a high note, talking about the 1 million-passenger milestone ILM had reached at the end of 2019 and celebrated through January 2020. Everything was moving along on schedule with plans to grow infrastructure, checkpoints, parking and concessions. The reality of COVID-19, however, changed everything.

By April, ILM — the fifth-largest airport in North Carolina — hit an all-time low in operations. Thanks to the $19.8 million grant awarded by the CARES Act, the airport was able to secure employees and carry its debt for the next four years.

Wilsey said airport officials tightened their budget for 2021 and have updated operating procedures to implement new sanitization and cleanliness policies under their COVID-19 program, “until the coast is clear.” The airport has installed plexiglass sneeze guards and hand-sanitizer stations, made seating changes, has cashless self-service parking, modified restaurant menus and installed social distancing floor markers.

The new normal of travel includes all employees and passengers wear masks at all times in public spaces, from check-in to boarding, and then are carried through according to each airline's policy.

Grants awarded to ILM in FY20 from the state General Assembly ($9.1 million) and from the FAA ($21 million) have helped the airport move forward with Terminal Expansion Contracts 2 and 3 over the past five months, Wilsey said.

ILM increased terminal expansion with new ticket areas and added a third checkpoint lane. By the beginning of July, it was operating two lanes daily for more efficient customer service.

The airport will continue moving forward with the Monteith Construction contract that costs around $750,000 a month for gate and terminal expansion, slated for completion in early 2023.

“This is a challenging period we’re going through,” Commissioner Rob Zapple commented to Wilsey. “You’re doing a terrific job. Does the ticketing area include more kiosks to shift away from person-to-person contact? And where do you stand on the parking decks?”

“We believe the current lots will be sufficient for Thanksgiving,” she said in an email Monday. "All lots are now operated by credit card machines, making it a cashless process. We are delaying any decision on new parking areas for a year, when we see how passenger traffic and parking returns."