Hammering For More Of The Market 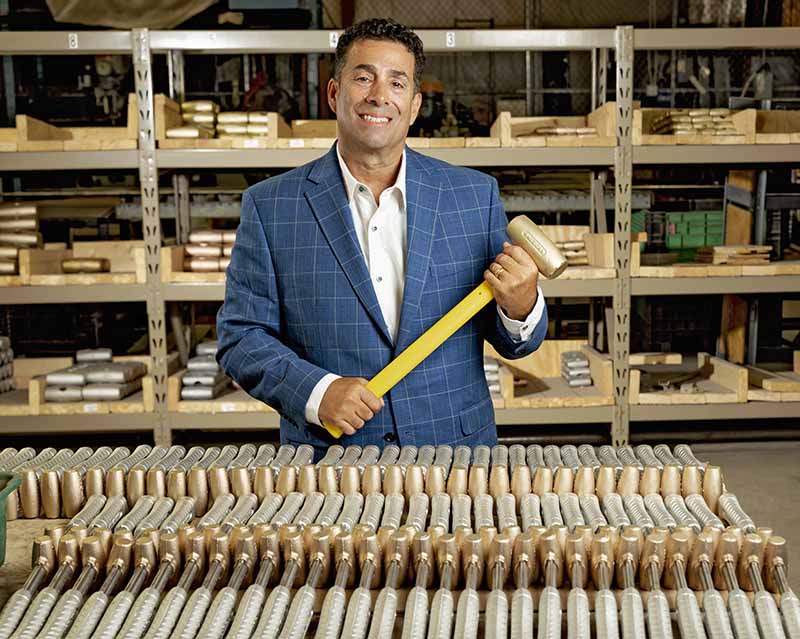 American Hammer President and CEO Ted Leitter stands inside the company's base in Wilmington with a series of hammers from its aluminum grip line. Photo by Michael Cline Spencer
A Wilmington-based hammer manufacturer is making more than 580 different varieties of one of the world’s simplest tools.

“You would never think there would be that many hammers and variations, but our hammers are very special in that they satisfy specialty markets,” said Edward “Ted” Leitter, president and CEO of American Hammer.

The company, on South 12th Street in Wilmington, makes hammers that serve more than just the construction market.

For example, Leitter developed a hammer line based on a costly issue that came up in the nuclear industry. A dead blow hammer that is used in the industry broke open, and parts were lost in a nuclear reactor turbine.

“That was in Saint Louis. That turbine went down at a nuclear power reactor and cost them $9.5 million just to retrieve the pieces out of that reactor. And it was more than that because they had to shut it down, which wasn’t scheduled to be shut down … all for a $50 hammer,” Leitter said.

So Leitter worked six months to develop and engineer a hammer that would solve the issue. It is now American Hammer’s foreign material exclusion (FME)-compliant hammer. This line is also used in the aerospace industry and by the military.

“That’s how our hammers are born – a problem arose and … I solved it,” he said. “And that’s what we do here. We create hammers that solve problems in manufacturing.”

Leitter’s FME hammer design is one of three patents he holds for the company.

It’s a dead blow hammer specifically engineered to eliminate recoil, and if broken, parts inside are able to be retrieved using a magnet. The hammer can be equipped with a radio-frequency identification chip to identify all the internal parts when scanned.

Leitter is currently working on a sledgehammer extension of the FME line.

“The demand is high for heavier and longer versions for larger turbine rebuilding applications,” he said.

American Hammer’s line will be expanding to more than 600 hammers in 2020, he said. The company typically grows 20% to 25% a year on average, he said.

Leitter purchased the company in 1986 when he was just 20 years old, after starting out as a hammer deliverer.

The company at the time was located in Rockford, Illinois, under the name Imperial Hammer. Leitter changed the name to American Hammer in the early 1990s, after the noncompete expired, he said.

After developing and growing its line of hammers in Illinois, Leitter decided it was time for a change. To escape the harsh Illinois winters, Leitter said, he moved the company and his family to Wilmington in 2013.

The company still has a manufacturing operation in Chicago.

The hammer is a non-sparking hammer, avoiding the potential for explosions, that is used only to open up a nut that controls the flow of gas from the tanker truck. It can withstand temperatures of minus 400 degrees, which is typically found in that type of work environment, Leitter said.

While its South 12th Street building is adequate for the company’s current needs, Leitter said it could potentially expand operations sometime in 2022.

“Eventually, all of it will be done in Wilmington,” Leitter said. “We’re still expanding product lines and going into new markets.” 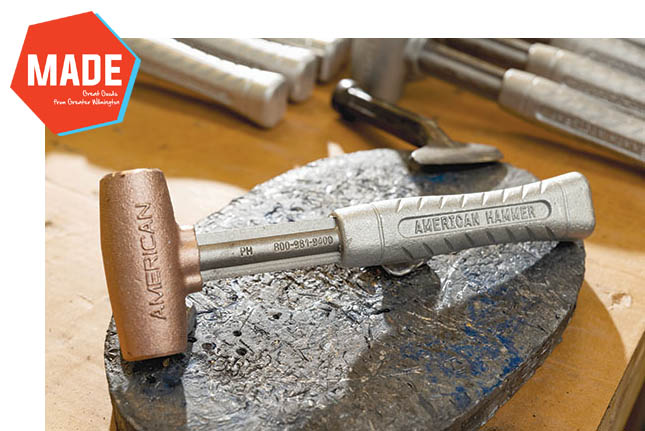 Places of product distribution: North and South America, the EU and the Middle East

What made the company decide to make its goods locally?  Leitter: “After spending 28 years manufacturing in the long cold climate of the Midwest and specifically dealing with the everincreasing business taxes of the state of Illinois, it became clear that we needed to make a move to a warmer climate in both temperatures and to a pro-business state like North Carolina. And after many fact-finding trips to the state, we found our home in Wilmington. It checked all of our personal and corporate needs.”

What’s your target market?  Leitter: “Our extensive line of non-marring and non-sparking hammers are primarily used in aerospace, automotive, cryogenic/CGA gas, all of the U.S. military, mining and pump production, plastic molding and injection, petroleum/ NG drilling and pipeline transport, turbine production and repair, metal processing and general MRO activity throughout the U.S. and international manufacturing and metal industry.”

What’s next?  Leitter: “We are always expanding our lines to satisfy new market applications.”

EDITOR’S NOTE: To be considered for the Greater Wilmington Business Journal’s MADE feature, contact [email protected]