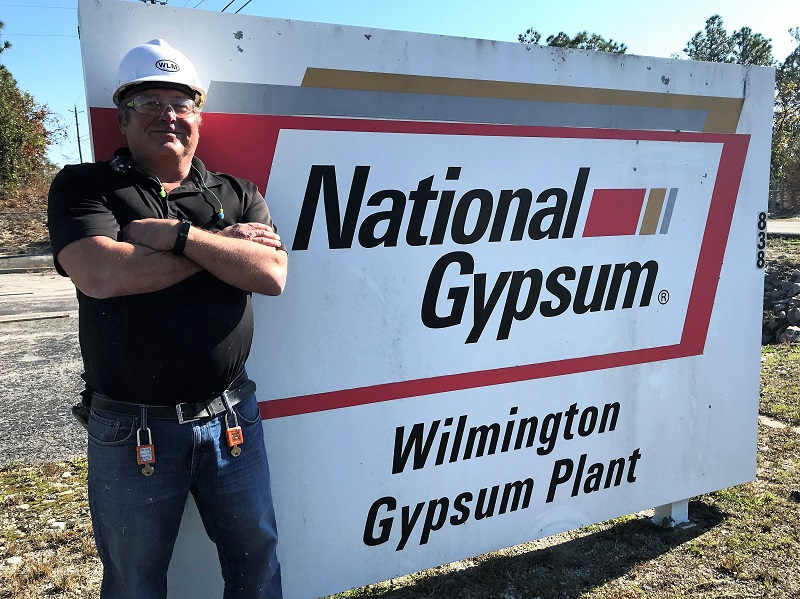 Charlotte-based National Gypsum started operations at the facility on Nov. 15, sending out a shipment of the wallboard product made at the 46-acre site at 838 Sunnyvale Drive, company officials said Wednesday.

The resuming of plant operations put 45 people to work. Officials said that of those 45 employees, 16 previously worked at the Wilmington plant before it shut down in 2009.

In May, National Gypsum CEO Tom Nelson came to Wilmington to announce the reopening of the plant, which was at one point was in competition with another site in Tampa, Florida for the project.

The November opening came after the company was put about three weeks behind due to Hurricane Florence, which hit the area on Sept. 14.

The storm halted site construction and employee training. The hurricane caused only minor damage to the facility, officials said.

The company provided services to its employees after the storm, including housing and supplies, to help them “get back on their feet,” Lance Davis, National Gypsum's Wilmington plant manager, said Wednesday.

“We had a great group to begin with, and it just kind of cemented the relationship as we cared for them during the hurricane,” Davis said. "We knew we had a unique opportunity with the new workforce to create our own culture, especially regarding safety, and going through that process of the hurricane just got us moving in the right direction.”

The company’s decision to open in the Wilmington area was sparked by several factors, including a local incentives package approved earlier this year, said Todd Broud, regional manufacturing manager.

The demand for National Gypsum products in the Carolinas and the Southeast, as well as the ability to make a broad range of products at the Wilmington plant, were other factors in the decision to pick the site, Broud said.

“Our spend is consistent with the incentive package,” Beth Straeten, the company's director of corporate communications, said about the amount of investment in the plant. She did not disclose specific numbers, but the incentives package calls for a minimum capital investment of $25 million.

National Gypsum made several improvements to the plant for its reopening. That included reconfiguring space inside the facility for new office space and expanded training and meeting space, Broud said.

“That was a significant part of what we did here,” Broud added.

Now the Wilmington plant is a regional supplier for the Southeast.

The company's warehouse and manufacturing space is used to produce three different types of gypsum wallboards.

And in 2019, the company plans to expand its product line produced at the site with a fourth product.