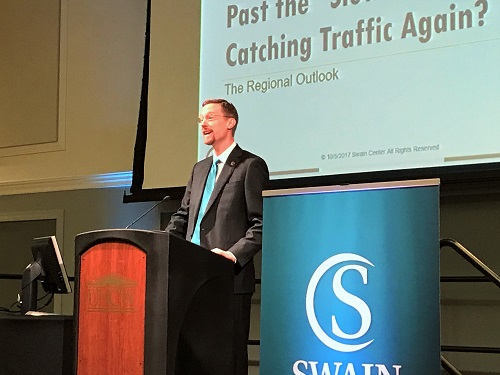 Adam Jones, area economist at UNCW, gives his economic forecast during an annual conference at the Swain Center. (Photo by Christina Haley O'Neal)

The regional economy is cruising on steady growth.

That's according to the presentations shared Thursday at the Economic Outlook Conference at UNCW Swain Center, by Adam Jones, regional economist, and Thomas Simpson, executive in residence, with the with the Cameron School of Business.

In front of a large crowd at the conference, which held business men and women along with top officials in the transportation industry for a panel discussion that followed, Jones described in his outlook an economy that has moved past roadblocks and into the "open road" of a rising economy.

"Economists are forecasting the region to continue to outperform both the state and national economies," Jones said.

In terms of gross regional product, while the U.S. started to recover in 2010, the region was "caught in traffic," he said. "It wasn't until 2013 that we were flying down the open road."

More recently the region is heading into toward a more normal pattern, as growth rates in the region have moderated from 4.8 percent down to 3.8 and 3.2 percent last year.

This growth will moderate over the coming years and match more closely with the growth of productivity and population, he said. The normal movement is apparent when looking at employment versus the labor force.

The unemployment rate has fallen to a seasonally adjusted 4.3 percent and the excess unemployment has "nearly been eliminated," he said. Employment is now growing faster than the labor force.

Overall, wages are on the rise, he said. Currently, the average wage is approximately the average of 2008.

However, that is average is masked by the regional growth in hospitality and tourism sectors, which tend to pay less than the typical job in Wilmington. Looking across all sectors, Jones said wages are steadily increasing.

"Averages include the different types of jobs in the region," Jones said. "This [sector] is holding down the overall average."

In terms of labor force, New Hanover County has seen the largest growth by percentage in the professional and business category, a business Jones said sells and provides services to other businesses, "supporting a network of surrounding firms."

And as wages increase, regional consumption is on the rise.

Home prices are once again increasing as evident by both the average and median sales prices. "Homes are selling and buyers are buying once again, so I'm cautiously optimistic," Jones said of the housing market. Tourism expenditures in the area are also increasing.

Businesses in the Carolinas remain optimistic about business conditions and future sales and firms expectations for the future remain at "elevated levels," he said.

The regional economy is expected to grow at 3 percent this year and continue to grow at a slightly slower pace of 2.8 and 2.7 percent in the coming years, "as tighter labor markets and the removal of accommodated policy such as these unusually low-interest rates slow down and start to constrain growth," Jones said.

Orders for capital goods continue to rise, according to Simpson. In the external sector, the dollar has weakened over the course of the year -- down about 10 percent -- something which he said is "important for this region in terms of exports."

"This is making exports more competitive again," Simpson said. "Beyond that, we have seen that the rest of the world, particularly Europe, is looking stronger than it had been, so all of this very favorable in terms of our external sector, our exports."

Simpson said inflation has been running persistently for some time below the Federal Reserve's 2-percent target.

"I think as the economy get's stronger and the slack in the labor market is absorbed, the inflation will pick up a little bit, but I don't think still that it will reach the two percent target, at least for the foreseeable future," Simpson said.

This is posing a dilemma for the Fed, and Simpson said policymakers are saying they intend to raise the federal funds rate by a quarter percent by the end of this year, by roughly three-quarters of a percent next year and about the same amount the following year.

Population trends across the state are painting a "very interesting picture," Jones said.

Regional populations are among the some of the fastest-growing in the state. The population of New Hanover County in the past five years has grown faster than the state average. The fastest growth, however, has been in Brunswick and Pender counties.

"So as a continued geographic concentration of people and economic activity is going to put pressure on our infrastructure both within the region and between the regions, so we're going to need trains, planes, automobiles, ships and increasingly, fiber optics, to transport people, goods, services and ideas between these economic hubs," Jones said.

Twenty years down the road, state population growth, according to state demographers, Jones said, is expected to continue to move toward Pender and Brunswick counties, with less growth, even negative growth, in cities inland.

"Wilmington is quickly becoming a true hub for Southeastern North Carolina. Let's make sure we have the spokes that connect it," Jones said.