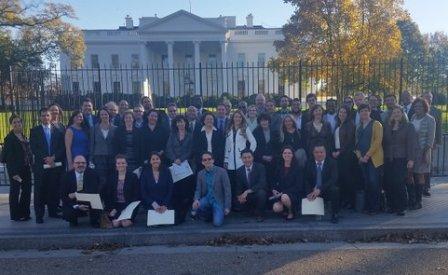 (Photo courtesy of the Center for Innovation and Entrepreneurship)
Update: This version includes a photo and additional information about the meeting of Growth Accelerator Competition winners in Washington, D.C.

Roberts and Vetter were representing the CIE, one of 50 winners of the U.S. Small Business Administration’s first-ever Growth Accelerator Competition this summer. The group met with SBA administrator Maria Contreras-Sweet to collect their awards and hear a pep talk.

“As SBA Administrator, I talk a lot about ‘entrepreneurial ecosystems,’ because we know successful new enterprises aren’t created in a vacuum,” Contreras-Sweet wrote on the SBA website. “Incubators, or accelerators, create a multi-faceted support structure to help startups quickly launch and commercialize their ideas.”

Speaking of Silicon Valley, Contreras-Sweet said that “the world’s global capital of high technology” produced a “game-changing model for empowering entrepreneurs who wish to transform small startups into ‘the next big thing.’”

Roberts said that the White House session mostly involved listening to remarks from government leaders involved in innovation-based efforts, the attendees did have opportunities to exchange ideas with each other.

"My fellow accelerator leaders had a very positive reaction when I explained the Aspirin event we had when the five largest employers of Wilmington explained their five biggest pains they would pay to find solutions for," Roberts wrote in an email. "Sounds like there are similar events in Los Angeles and other bigger markets to open doors to bigger potential clients.

"CIE also had a chance to explain what we are doing to help our companies raise capital despite not having a venture capital fund in southeastern North Carolina," Roberts continued. "Many of the other accelerator grant winners were from non-traditional innovation economic centers outside of the powerhouse places like Silicon Valley and Boston and also struggled with early stage capital needs."

The SBA competition, according to Contreras-Sweet, was conceived as a way to “identify the best players in this space.”

The competition winners, she wrote, are “committed to delivering this [Silicon Valley-style incubator] model to every corner of our country. Selected out of 832 applications, they will focus on lifting up underserved populations, including women, minority and veteran business owners.”

Each award carries a cash prize of $50,000 from the SBA. The purpose of the competition, the SBA announced in May, was to “draw attention and funding to parts of the country where there are gaps in the entrepreneurial ecosystem.”