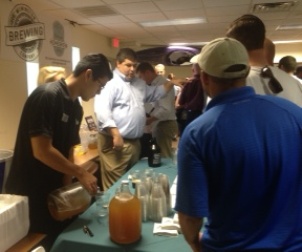 Attendees at the CIE's session on the business of beer sample local brews. (Photo by Jenny Callison)
One could argue that beer has long been an important part of Wilmington’s culture, thanks to the city’s identity as a beach and college town. Increasingly, however, entrepreneurs are looking at beer through a business lens.

In Wilmington and across the country, demand for craft beers is growing. Several new microbreweries have joined veteran Front Street Brewery on the local scene, and some established breweries are eyeing Wilmington as a possible expansion location. The Wilmington City Council is developing zoning regulations for breweries.

With this activity fermenting, Jim Roberts, executive director of University of North Carolina Wilmington’s Center for Innovation and Entrepreneurship (CIE), figured it was time to roll out the barrels, business-wise.

At the center’s event Monday, dubbed Business of Beer at the Beach, three experts spoke to a capacity crowd about the potential – and perils – of brewing.

While the product may embody good times and a mellow lifestyle, the speakers emphasized that making beer is hard work that requires thorough planning, substantial investment, attention to detail and savvy marketing.

David Gardner, an investor in Cary-based Fortnight Brewing Company, advised aspiring brewers to “add another zero to every number in your business plan.”

“If you don’t have enough money, don’t do it. Delay [your project] or change your plan,” said Dino Radosta, an investor in and operator of White Street Brewing Co. in Wake Forest.

Potential investors want to see a detailed business plan and evidence that the aspiring brewer is knowledgeable about the craft, Gardner and Radosta said. Even though there's plenty of art to beer making, that aspect of the business must be balanced with a realistic expectation of revenue and consistent quality of the product, they said.

Both men shared their experiences in finding just the right location for their breweries, which require large, flexible spaces with high ceilings and solid foundations. Successful breweries also need to be in high-traffic areas, with significant production and storage capacity as well as tap rooms and meeting rooms to draw visitors and boost revenue, especially in the early years of business.

“People like to drink beer at a brewery,” Gardner said. “Beer that has traveled will never be as good.”

Gardner cautioned that a would-be brewer must be a detail person.

“There are lots of prohibition laws still on the books. Be ready for hassle,” he said, adding that inconsistencies in inspections can also be frustrating. Conflicting mandates from inspectors resulting in do-overs drove Fortnight’s construction “a couple hundred dollars over budget,” he said.

Derek Allen, an attorney in Ward and Smith’s Asheville office who has worked with several startup breweries, warned that the current trend in high-hops beers has driven up the price of hops. Ensuring a predictable supply of hops is problematic because of increasing demand and unreliable harvests.

“If you want to make money, put a brewery on your hops farm,” he said, “although hops don’t grow well in North Carolina. Malt does.”

On the plus side, all three speakers emphasized the enormous personal satisfaction of beer making as well as the camaraderie that characterizes brewing communities.

“You would think there would be a lot of competition among all the microbreweries, but there’s not,” Allen said. “It’s more a sense of ‘It’s us against the big guys.’”