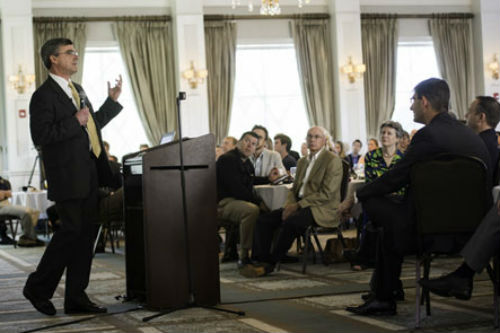 Executives of five local employers addressed a business audience Thursday at an event hosted by the Center for Innovation and Entrepreneurship (Photo c/o UNCW)
An event Thursday morning enabled company representatives to ask members of their audience to hand them some aspirin – metaphorically, of course.

In the program, hosted by University of North Carolina Wilmington’s Center for Innovation and Entrepreneurship, representatives of five large economic drivers in the area spoke about their biggest headaches and invited attendees to offer solutions.

Castle Branch president Joe Finley outlined his company’s fast-expanding portfolio of products and services, ranging from web portal design to developing apps to help college students connect with mentors and jump-start their careers. All are technological innovations and most depend upon aggregated data.

In asking for ideas that would help the company move forward in these areas, Finley shared additional information about Castle Branch’s latest initiative: Tek Mountain.

Tek Mountain, a technology incubator and accelerator that will occupy the third floor of Castle Branch’s new 60,000-square-foot building, will be a “landing zone for tech entrepreneurs in the community,” Finley said. “It will be a community-driven incubator/accelerator.”

In an interesting twist, Finley said that Tek Mountain would also invite interested Castle Branch employees to set up shop in the top floor to work on products or services that the company can sell through its channels.

“If they are successful, they could eventually separate from Castle Branch and start their own companies,” Finley said.

Paul Colvin, executive vice president, global clinical development for PPD, said that one of his company’s biggest needs is to turn a glut of data and tech output into useful information that will inform the company’s decisions and actions.

Another major need, he said, is to find “smart, hardworking employees.”
“We need to win the talent competition,” he said, noting that the company, which employs 13,000 people in 46 countries, prizes potential employees who are culturally aware and can navigate a global marketplace; who have strong written communications skills; and who can forge and maintain relationships and be accountable for their results.

T.A. “Mickey” Finn, a consultant for the N.C. Military Business Center, told the audience that the armed forces buy an enormous number of goods and services from small businesses. He mentioned specifically five tech-related problems the U.S. Marine Corps is trying to solve: energy storage, especially storage that is lightweight and portable or wearable; efficient techniques for energy harvesting; efficient auxiliary power units for vehicles that don’t involve petroleum; waste-to-energy technologies that will allow easy clean up of combat or campsites; and water purification systems for river water or gray (previously used) water.

Charlie Maimone, vice chancellor for business affairs at UNCW, asked for help with employee recruitment and retention, especially as it relates to trailing spouse employment and enhancement of the area’s quality of life.

He also mentioned the ongoing need to build public-private partnerships and collaborations.

“If you have an interest," he told the businesspeople in the audience, “there is a high probability that somebody on our campus has the same interest.”

Mark Varno, vice president of advanced programs at GE Hitachi Nuclear, said that one of his company’s biggest challenges is replacing obsolete parts, which it often must develop within the company. Another challenge is to find ways to manufacture products faster and at lower cost. A third, he said, is to tap into big data to give customers more value in the products they purchase. 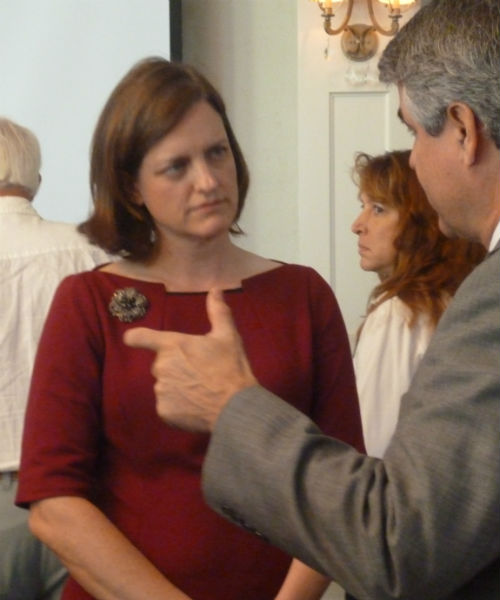 After all five presentations, CIE executive director Jim Roberts asked audience members who had ideas for any of the represented companies to drop a business card with basic information into that company’s box at the back of the room.

The program’s opening remarks were delivered by North Carolina treasurer Janet Cowell, who oversees more than $80 billion in pension investments for the more than 875,000 teachers, firefighters and public employees in North Carolina.

By law, a portion of pension funds must be invested in the N.C. Innovations Fund, part of whose mission is to help startup companies in the state. The fund has been especially interested in life science-related and software ventures.

“It was interesting to see the amount of activity here in Wilmington with the companies that presented,” she said.

Cowell’s associate Suzanne Ruggles, asked about recent accusations by the State Employees Association of North Carolina that Cowell is making risky investments of a portion of the state’s $86 billion pension funds, said that the complaints are baseless.

“We act in a very transparent way and are rated very high on our fiscal soundness,” Ruggles said, referring to a report issued last summer by Moody’s Investors Service.

According to state law, Cowell, who is responsible for making pension fund investment decisions, can invest up to 35 percent of pension fund holdings into hedge funds and private-equity firms. The SEANC has filed a complaint with the federal SEC over the  practice because the entities don’t have to disclose details to retirees or to the SEANC, and thus funds invested in them can’t be monitored by the association.