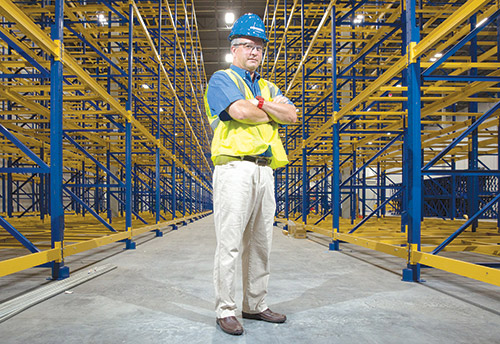 Chuck McCarthy, president and CEO of Port of Wilmington Cold Storage, stands inside the newly finished warehouse facility that is expected to attract more commodities through the port. (Photo by Chris Brehmer)

The new cold storage facility at the Port of Wilmington is about to open, and state officials hope all the protein it ingests will serve as a major building block for exports.

More than three years in the making, Port of Wilmington Cold Storage – now set to open on Aug. 15 – represents a bet that refrigeration, blast freezing and logistical support will help convince an increasing number of commodities producers to bypass the ports of Charleston, Norfolk and Savannah and step up their export activity in-state.

USA InvestCo Founder Chuck Schoninger, the Wilmington-based real estate developer who spearheaded the project, believes protein-rich commodities like chicken, pork and turkey, produced in large volume in the Tar Heel State, will put the facility on the map.

“That’s our bread and butter … the low-hanging fruit of the big guys alone can fill us up,” Schoninger said of protein, adding that imports of fruit, vegetables and seafood will help fill up his warehouse. “There are about 20 companies that will naturally use us.”

Early last year, Rose Hill-based House of Raeford Farms, which produces, processes and markets chicken products, was only starting to evaluate the merits of using cold storage at the port.

At the time, House of Raeford spokesman David Witter cited shipping line rates and vessel destinations as “the major factors” in deciding which East Coast ports to use for exports – and by extension, port-based cold storage.

But this month, asked again about warehousing product in Wilmington rather than at another facility, Witter stated, “Our Wallace plant will be using the port’s facility for our
Asian customers.”

Convincing other large producers to use the warehouse could mean big payoffs.

Creating those benefits is at the heart of the new facility’s mission.

At 101,000 square feet and with a main freezer room and expansion space that can hold a total of 10,500 pallets of product, the cold storage warehouse aims to meet the needs of large- and small-scale exporters.

The facility provides cooling and freezing across a range of temperatures from minus-10 degrees to 40 degrees Fahrenheit and is capable of servicing three or four primary producers and 10-15 smaller ones at a time, said Chuck McCarthy, president and CEO of the USA InvestCo subsidiary.

A third room for blast freezing, with space for about 200 pallets, can bring products like chicken and pork down to zero degrees within 24 hours of the time they are processed, versus the 72 hours mandated by regulators. A USDA inspection office is also on the premises.

Shipping perishables requires careful handoff from processing plant to road, road to warehouse and warehouse to vessel to reduce spoilage and maximize freshness, so an 11-bay loading dock can rapidly transfer product in and out of the new facility. Product can also be moved directly to or from CSX rail cars.

For perishables awaiting vessels, refrigerated containers can be hauled a short distance from warehouse to container yard and plugged in to electrical outlets to maintain product integrity.

Such cold storage capabilities took on added significance with the July 19 announcements that the Queen City Express, the only direct freight rail service into the Charlotte area from a port in the Southeast, will begin nonstop runs to and from Wilmington this September and that CSX will also build an intermodal terminal in Edgecombe County that will initially handle more than 260,000 containers per year. Each link is expected to generate more business at the port.

One of them, George Wooten, owner and president of Wayne E. Bailey Produce Company in Chadbourn, currently ships sweet potatoes to Europe through the ports of Norfolk and Charleston.

To keep freight costs down, Wooten works hard to max out his load. “Typically, we have to buy an overload permit to do that now,” he said.

For producers like Wooten who transport a full load to remote ports, having Port of Wilmington Cold Storage handle their freight arrangements may make more sense, Schoninger said.

If requested, “we’ll pick it up from the back of your loading dock and pick it up in China,” Schoninger explained. “We want to be able to pick up at every processor’s facility.”

Kelly McIver, executive director of the N.C. Sweet Potato Commission, said demand for cold storage among her group’s 400-plus members is growing.

“Cold storage is very important to us,” she said, as North Carolina – the leading sweet potato producer in the nation – continues to export to Europe, Mexico and the Caribbean.

“We are nothing but a hop, skip and a jump from the port,” McIver said. “We are hoping that it [the new facility] will allow us to use more of the Port of Wilmington.”

For his part, Schoninger has begun reaching out to smaller, would-be exporters to see if they want to be introduced to buyers in China, where USA InvestCo has an office and a deep network of contacts.

To fund the warehouse, Schoninger turned not to conventional bank or equity financing but to the federal government’s EB-5 program, which provides foreigners with an opportunity to receive green cards in exchange for a minimum half-million dollar investment in a U.S. project.

Thirty such investors, most of them Chinese, ponied up $500,000 apiece for a total of $15 million to help make cold storage at the port a reality, said Christopher Ardalan, director of foreign investment for USA InvestCo.

Card issuance is conditioned on each investment creating at least 10 full-time jobs, for a total of 300 direct or indirect positions on- and off-site, Ardalan said.

Schoninger said 25 to 30 jobs will have been created when the warehouse opens.

But while EB-5 helped keep USA InvestCo’s debt load down, waiting for funding slowed completion of the project, the company acknowledged.

“It bogs you down,” McCarthy said. “We had to wait until we had a good portion of it released” to avoid “a bad gamble.”

Even so, Schoninger has few regrets. “I still don’t believe banks are doing any speculative deals,” he said.

As exports accelerate, cold storage represents the latest in a growing list of benefits at the Port of Wilmington including new container service, the ability to host even larger vessels, low congestion and faster gate turn times.

According to the USDA, the total value of North Carolina agricultural exports exceeded $4.1 billion in 2014, an increase of more than 200 percent from 2005, with pork alone experiencing a $369 million increase.

Competitive port improvements and robust exports had state officials speaking optimistically even before the recent announcements by CSX and the state.

“This is not a zero-sum game. This is an expansion game,” said N.C. Secretary of Commerce John Skvarla III in Wilmington recently when asked about potential competition among cold storage facilities in the eastern part of the state.

Norfolk, Charleston and Savannah should be viewed as “backup” ports for Wilmington as activity there increases, Skvarla stated.

“We want to be the specialist for international, for import/export,” he said.