Putting Hammers Where Their Hymns Are

On October 11, 2014 Cape Fear Habitat for Humanity held its annual “Interfaith Build Day” in honor of World Habitat Day. Each year, we invite volunteers from the wide variety of faith communities in the Wilmington area. In the last two years, the event has drawn representatives from the B’Nai Israel Congregation and Temple of Israel, The Tauheed Islamic Center, the Chua Tung Lam Buddhist Temple, the Church of Jesus Christ of Latter-day Saints, Saint Nicholas Greek Orthodox Church, and more than a dozen other Christian denominations. 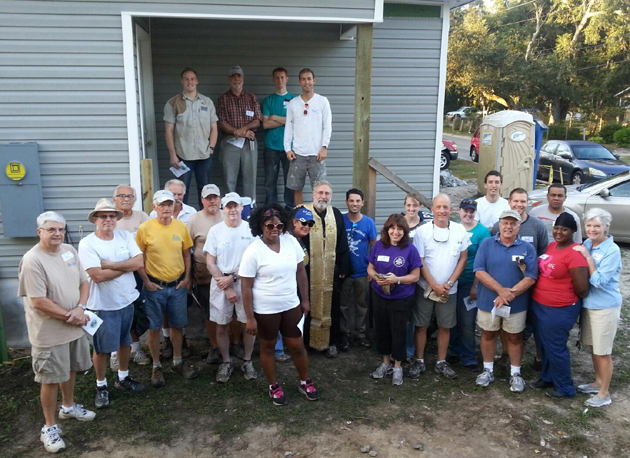 The morning began with short prayers and devotional passages from the different denominations and faiths present. Then Father Jon Emanuelson of Saint Nicholas conducted a blessing of the house that the volunteers were helping to build. The early morning sunlight reflected off the gold trim of his cassock as he climbed the stairs and made his way through the unfinished rooms of the house, chanting prayers in English and Greek.

“Interfaith Build Day” is important to me personally for a couple of reasons. Before I came to Habitat two years ago, I worked for eight years at Wilmington Interfaith Hospitality Network, where I had the opportunity to work with people from a wide variety of Christian churches. And in a previous life (shout out to the Hindu tenet of reincarnation), I had the good fortune of living in Sri Lanka for several years.

Sri Lanka is one of the most religiously diverse countries in the world. There are large numbers of Buddhists, Hindus, Christians and Muslims who live and worship there. One of my more memorable experiences was climbing to the top of “Sri Pada,” a mountain known to English speakers as “Adam’s Peak.” The mountain rises up more than 7,000 feet over the region’s expansive bogs filled with rich gem deposits. At the very peak, there is an indentation in the rock that is variously held to be the footprint of Adam, Buddha or Shiva. Arabic folktales hold that the gems at the mountain’s base are the crystallized tears of Adam and Eve, shed upon being cast out of Eden. 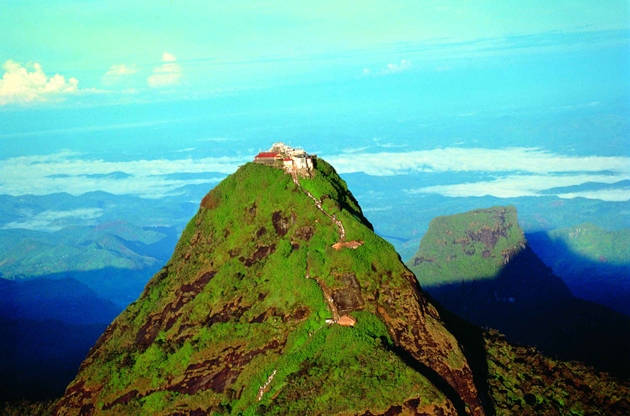 The trail up the mountain is made up mostly of steps carved out of the rock. Some are a foot tall, and some are as high as three feet. It is an arduous climb, and once over 5,000 feet it becomes chilly by Sri Lankan standards:  the temperature plunges into the lower 50s! (As one fellow climber said to me near the summit, “The wind, it has fingers of ice!”) People of all faiths make the ascent and then gather at the small sanctuary on top to pray, meditate or just enjoy the view. The “footprint” itself is unremarkable, just a mottled imprint vaguely in the shape of a foot. Like so many things in life, though, the value is in the journey, not the destination. It is a wonderful thing to share a path (literally) with people of different faiths and then just be with each other in contemplation.

At Habitat, I find myself sometimes focusing too much on the destination: the completion of affordable homes for our community. I don’t always take time to appreciate the journey. The thousands of volunteer hours that go into building a home also provide opportunities for sharing a path and for quiet contemplation. The Interfaith Build reminded me how important that is.

As inspiring as I found the rich diversity of religious faith that was present that morning, I was most impressed when the spiritual vestments came off and the physical investment began. With the house blessing performed, Father Jon removed his clerical robes to reveal the practical work clothes beneath. He and the representatives of the other faith traditions then put their hammers where their hymns are and got down to work.

Steve Spain is the Executive Director of Cape Fear Habitat for Humanity. Over the last 25 years, CFHFH has provided first-time homeownership opportunities to more than 150 families and currently builds a dozen new houses a year. To explore volunteer or sponsorship opportunities or to learn more about Cape Fear Habitat for Humanity’s programs, visit www.capefearhabitat.org. Contact Mr. Spain at [email protected]. Like CFHFH on Facebook: www.facebook.com/capefearhabitat.

Other Posts from Steve Spain

What’s In A Name?

Trading Places: The Benefits Of Job-Swapping

From Here To Eternity Or The Last Picture Show?

Finding The Value In Organizational Values

When Is A Bicycle Not A Bicycle?

Measuring Success In A Nonprofit

You Get What You Pay For

What To Expect When You're Expecting A Successful Special Event

Breakfast for Tiffanies: How One Thing Leads To Another