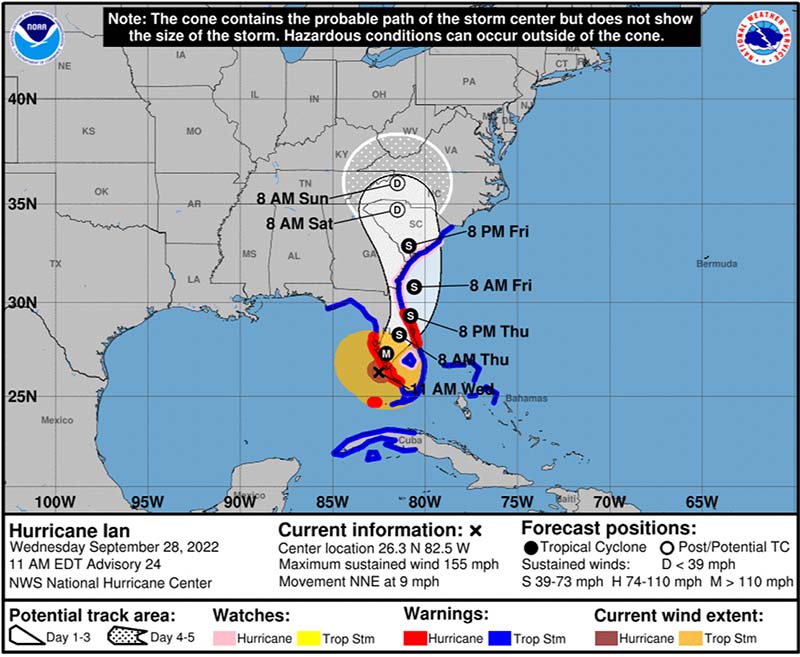 Hurricane Ian will make landfall in Florida Wednesday and will impact the Carolinas beginning Thursday, per the latest forecast. (Forecast courtesy of the National Weather Service)
Hurricane Ian has made landfall on the west coast of Florida and will move off the Northeast Florida coast Thursday evening.

The Category 4 storm could make landfall across southern South Carolina on Friday, according to the latest National Weather Service forecast.

The Maren Morris concert slated for Friday at Live Oak Bank Pavilion has been canceled; tickets will be automatically refunded.

At 6 p.m. Wednesday, a N.C. State Ports Authority spokesperson said all gates in Wilmington, Morehead City and Charlotte were all operating under normal hours "until further notice."

Beginning Thursday, coastal flooding is expected to reach the Cape Fear region; low-lying areas could be inundated by 1 to 3 feet. The highest levels will occur with each high tide on Friday, according to the National Weather Service Wilmington briefing, which was released at 12:40 p.m. Wednesday (the next briefing will be released at 6 p.m.).

Rainfall between 4 and 6 inches is expected, with as much as 6 to 8 inches in some areas. “The heaviest rainfall is expected during Friday into Saturday morning,” the briefing states.

The Northeast Cape Fear River in Burgaw has a 25% or less chance of reaching minor flood levels. “People along all rivers in southeast NC and northeast SC are encouraged to take action now to prepare for minor river flooding,” the briefing states.