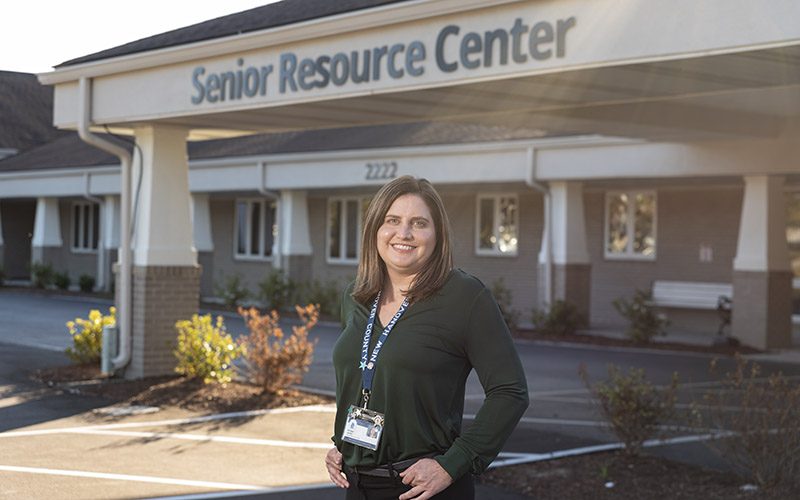 Amber Smith and Andrew Zel­din meet people in their 60s who have continued working past retirement age for a variety of reasons.

“We have some folks that have been fortunate enough to have saved and been able to plan for their retirement, and then we have some individuals that unfortunately for whatever life circumstances, they ei­ther weren’t able to save or they had a life event that took a good part of their savings, so they are continuing to work,” said Smith, who is the di­rector of the New Hanover County Senior Resource Center. “We have some individuals that just want to continue to work. They still feel that need to contribute to the workforce.”

Adding on to that, Zeldin, social work supervisor for the SRC, said, “We get a lot of people who, regard­less of age, don’t have the ability just to retire because they have to bring in additional income to pay for housing or medications or phone bills, electric bills, so they’re kind of wanting to retire, but they don’t have the capacity to do so.”

Working through retirement, opting to stay at home or choosing a retirement community are just a few of the trends and issues facing retired and aging Wilmington-area residents.

Ann LaReau, 75, falls into the category of someone who wanted to keep working. She started her own Alzheimer’s consulting business at age 72 and has worked for 25 years caregiving, teaching and training in the realm of Alzheimer’s and dementia care.

She was forced to retire somewhat in March when the coronavirus pandemic shut down the kind of in-person training and support groups she conducted. “Everything requires a group of people, which we’re not allowed to do,” LaReau said, adding that virtual meetings on the subject don’t translate.

“After my husband died, I thought, ‘Well, shoot, why don’t I just keep doing what I’m doing,’ and when I started my own business, I had a decent income and this whole thing has reduced all of that,” LaReau said of the pandemic. “All I’ve been doing now is some private duty work, caregiving. I just have one client right now, but I do love teaching and I miss it horribly.”

People like LaReau who have chosen to continue working, “they’re just active people that want to keep busy, who enjoy their jobs and whose kids are gone,” said LaReau, whose children and grandchildren live elsewhere, in some cases far away.

LaReau is also an active volunteer, including participating in food drives and raising funds for Alzheimer’s research.

Zeldin gave the example of housing.

“For someone to rent an apartment here, at least in New Hanover County, you have to be able to show that you can pay three times what the rent is,” Zeldin said. “For someone who is getting Social Security and they only get $1,300 a month, and the rent’s $1,000 and they have to show they can bring in $3,000 a month, they’re not going to be able to find affordable housing.”

The need for housing for retirees and seniors is one of the reasons New Hanover County is developing its first Master Aging Plan, with the help of a survey that wrapped up Dec. 2.

“Our goal is to have an age-friendly community and a strategic plan that will meet the needs of our residents, promote healthy aging, independence, and community engagement, and provide a coordinated system of service delivery,” Smith said in a letter to the community regarding the Master Aging Plan survey.

The Senior Resource Center, at 2222 S. College Road, opened in 1992 and was recently renovated to meet the needs of seniors today. For example, the exercise room at the SRC was upgraded, Smith said. “We’ve kind of scaled back on those lounge type of areas because what’s important to seniors today is much different than what it was 30 years ago; there’s more of a focus on wellness and activity,” she said.

Because of COVID-19, the SRC is closed for now for group activities. But other services continue, including its meals program and Medicare counseling. Some of those services help seniors and those of retirement age to stay at home rather than moving into a retirement community.

“We’re talking about being able to remain in a familiar, comfortable environment, where you have your cat and you have your favorite blanket and your recliner and you know where everything is, so that familiarity I think is really important and comforting to people,” Selden said.

Companies like Right at Home can provide a higher level of support in someone’s home.

“Most of the time they’re needing help with their activities of daily living, with bathing, dressing, some meal preparation. There can be some level of cognitive impairment going on that requires different types of care,” Selden said.

Meanwhile, retirement communities are a popular option for active people.

“There are amenities, there are activities there. It’s going to be easier to meet with your peers who have the same interests, and so you kind of have a ready-made social group,” Selden said.

The Wilmington area has a number of options for retirees who want to live in a retirement community, with more on the way.

“Located just south of Wrightsville Beach on the Intracoastal Waterway, Trinity Landing will consist of 184 units built in the initial phase of construction, followed by an additional 24 units in the project’s second phase,” stated a news release on the start of construction. The community was nearly 80% reserved as of press time.

“Located near Trinity Grove, an LSC skilled nursing home, Trinity Landing will join Trinity Oaks in Salisbury, Trinity View in Arden, and Trinity Elms in Clemmons as an independent living option for seniors offered by Lutheran Services Carolinas, based in Salisbury, North Carolina,” the release stated.

Karen and Charlie Reap chose to reserve a spot at Trinity Landing as a way to plan for the future. The Carolina Beach residents currently live in a waterfront community called Forest by the Sea.

Karen Reap, 77, cracked her femur during a fall a couple of years ago and she and Charlie moved to a Continuing Care Retirement Community in Winston-Salem.

“It was a nice place and everything, but it just wasn’t us. Charlie [who is 89] decided that he just didn’t like being around all those old people who were sitting around waiting to die,” Karen Reap said.

But they recognized they’re getting older and need to plan for the future. One of the things that clinched their Trinity Landing decision was that the people they met who also plan to live there were more active.

“They seemed to be the kind of people we wanted to be around as we age, people who thought young and were interested in life and so forth,” Karen Reap said.

Retiree and senior issues will remain a big part of the conversation in New Hanover County and the Wilmington area for many years to come, officials said.

Smith said in her Master Aging Plan letter that “this first Master Aging Plan is more important now than ever. It will be our roadmap and foundation to ensure we have the right and best services in place, and are prepared to meet every person’s aging needs.”