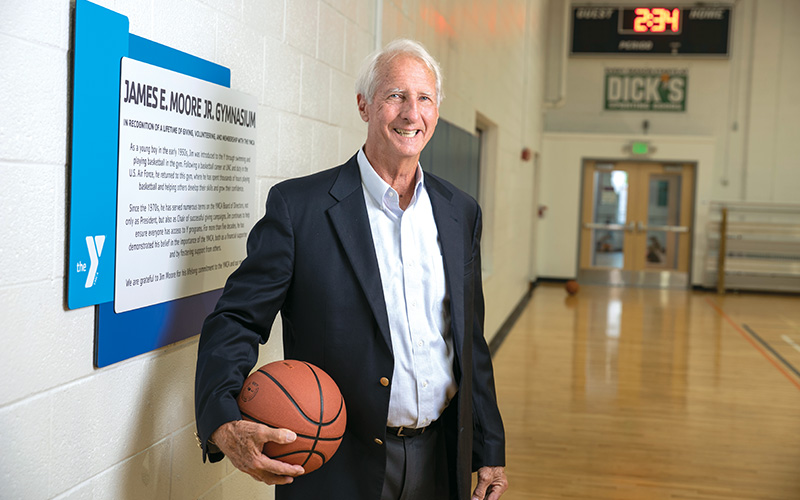 In August, the Nir Family YMCA’s gym was dedicated to James Moore, a former UNC basketball player, retired insurance agency head and community volunteer. (Photo by Michael Cline Spencer)
Jim Moore is an unassuming man who you rarely see in the limelight. But he is a giant in the Wilmington community.

Moore is the retired CEO and owner of the James E. Moore Insurance Agency. As a businessman and as an individual, Moore has, and continues to, support local nonprofits financially and personally.

“I wanted to give the community something better than what they were getting,” he said. “I wanted to exceed expectations for insurance for customers and employees and improve their lives.”

Moore, who played basketball in college at University of North Carolina at Chapel Hill, returned to Wilmington after serving as an officer in the U.S. Air Force. After he took over his family’s insurance firm, he turned it into one of the area’s largest independent agencies.

“My dad has been a leader in the community throughout his career,” said Moore’s daughter, Adrienne Moore. “And that’s not just from the insurance aspect. From serving on the former Insurance Advisory Committee for the county to the homebuilders’ board to the board of the YMCA [of Southeastern North Carolina], he always wanted to be involved. He doesn’t sit on the sidelines and be a spectator. He wants to participate, to give and help make things better and ensure there is progress being made.”

Jim Moore has held leadership roles in numerous industry associations, including as president of the Wilmington Association of Independent Insurance Agents and member of the Wilmington-New Hanover County Insurance Advisory Committee. During his tenure with the N.C. Joint Underwriting Association, during which he served as vice chairman and board member, Moore was instrumental in ensuring those living on the coast could get wind insurance.

“That was important for us who live here,” said Teresa Gedraytis, who has worked for Jim Moore for 35 years. “We’ve got to have someone from the coast looking out for the people on the coast.”

Despite running a flourishing business, Jim Moore has been a steadfast volunteer leader in Wilmington who has given his time and skills to help local nonprofits.

One organization to which Moore is committed is the YMCA of Southeastern North Carolina. Jim Moore, almost a lifelong YMCA member, has served on the local YMCA’s board of directors for nearly half a century. He led many of the organization’s annual fundraising campaigns and conducted fundraising for special projects. He also played a critical role in getting the organization a swimming pool and in the rebuilding of the YMCA after a fire in 2015.

“Jim may not be working on a big project like raising funds but on how to grow the YMCA and navigate the challenges nonprofits have,” said Dick Jones, the YMCA’s president and CEO. “He takes the long view, and that is vitally important to a nonprofit.”

Also, the fact that Jim Moore agrees to serving on the board again and again and to do the work needed to make a project a success has worked its own magic for the YMCA.

“Jim’s willingness to say ‘yes’ is inspiring,” Jones said. “You come back to serve on the board four times, and each time is a six-year commitment; that’s inspiring. He is able to say join me in taking this step, whether it’s participating in an annual or capital campaign or volunteering at an event. He doesn’t say, ‘You need to do this,’ it’s ‘Join me and let’s do this.’”

A host of other nonprofits and causes have also benefited from Jim Moore’s wisdom and willing hands. He has supported the Rotary Club, Boys & Girls Club, University of North Carolina Wilmington, Good Shepherd, Miracle League, an athletic program for children with special needs (the list goes on and on).

His work with the Miracle League, an organization that helps children with disabilities play baseball, is just one example.

Moore supported Pete Hexter and Sheila Boles in their efforts to get the Miracle League off the ground. With them, he found the people who could support the idea and make it happen, and he eliminated roadblocks that could derail the project. He worked getting others on board and encouraging them to donate monetarily and become personally invested, connecting people, getting the land, and involving the county, according to Adrienne Moore.

“Dad believes in community and nonprofits and making a difference without being asked,” she said. “He encourages people to get involved and give, and not just with their dollars.”

However, as with other organizations, Jim Moore’s work for the Miracle League didn’t stop with higher-level responsibilities. He also took on the grunt work. Jim was out there smoothing the fields, so they’d be in shape for the kids’ games.

Jim Moore has received numerous awards for his service to the community.

In 2015 he was inducted into the Greater Wilmington Sports Hall of Fame, which makes scholarships available to local athletes; the United Way named him the Outstanding CEO of the Year twice in five years; and last month, the YMCA honored him by naming its gymnasium after him.

Jim Moore said his lifelong goals are to inspire others and to make something positive that will last for generations to come.

“If you can keep something going beyond your lifetime, whether in business or the community, it is more effective,” he said. “We’re all better off if we work together to make it a better world.”