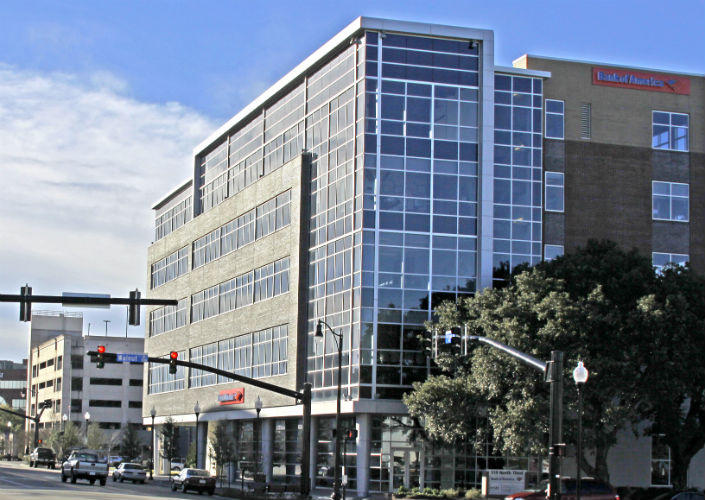 The New Hanover County Board of Commissioners will consider purchasing the former Bank of America building at 319 N. Third St. for Cape Fear Community College. (File photo)
New Hanover County could be poised to purchase the former Bank of America building in downtown Wilmington on behalf of Cape Fear Community College for $11.8 million.

Renovations to upfit the building with labs and classroom equipment would cost the county an estimated $14.8 million and would take place through 2027, according to county agenda documents.

The deal, which is scheduled to come before county commissioners at their meeting that begins Monday at 4 p.m., would allow CFCC to potentially triple its nursing graduate class and expand other health science programs, according to the community college.

It would also take a prime piece of downtown real estate out of private hands: The county and community college are currently reviewing the current leases at 319 N. Third St. “A plan for current tenants is not known at this time,” a county spokesperson wrote in an email Monday.

With campus buildings and resources located nearby amid the surrounding blocks downtown, the new location will enable students to take related classes and readily access support services, according to Sonya Johnson, CFCC's spokesperson. "This location is ideal because of its proximity to other health science programs and student support services on the college's downtown Wilmington campus," she said.

Tenants occupying the 55,000-square-foot commercial building include Black & Veatch, Litify Inc., Eshelman Ventures, Dye Creek Capital, Suzy and Port City Logistics (as a subtenant), according to the pending purchase contract. (Though listed as a tenant, Summit Logistics Group is subleasing its space and has moved to a different location in the Mayfaire area, according to a firm representative.)

Through a representative, Fred Eshelman, the founder of Eshelman Ventures and PPD, said he didn’t have enough information yet to comment. Other tenants either declined to comment or could not be immediately reached.

Owned by River Bend #1 LLC, the five-story building is currently under contract to be purchased by Cisco Acquisitions LLC. Brian Eckel, a partner at Cape Fear Commercial, is listed as a partner of Cisco Acquisitions in a purchase contract signed in early August. Eckel declined to comment ahead of the county meeting.

Hank Miller, of Cape Fear Commercial, is cited as Cisco’s broker, and Hill Rogers, of Cameron Management, is River Bend’s, per the contract.

Cisco Acquisitions would assign the contract to the county if commissioners approve the purchase at the same offer of nearly $11.9 million, according to a county memo.

If approved, the building would become one of many the county has purchased for CFCC. “The county has funded nearly every building the college operates in, primarily through debt proceeds,” said county spokesperson Jessica Loeper.

Assisting with CFCC’s building purchases is the role of the county, Loeper said, as it is responsible for financing capital outlay or needed bonds for the community college.

Conversations about the potential transaction began in late August, according to Johnson. The CFCC Board of Trustees submitted an official written request to the county to purchase the 1.9-acre property – which consists of three parcels including the building and associated parking lots – on Sept. 12.

New Hanover County's Loeper said, “The county manager was informed of this potential idea in August of this year, and then meetings took place with individual commissioners to brief them on this possibility in early September, including those that serve on the board of trustees.”

The county would likely finance the purchase through the sale of bonds if the deal is approved. It could use general fund dollars to cover the expense if the debt isn’t issued beforehand, according to Loeper. At the close of debt, the title would be transferred to CFCC, Loeper said.

River Bend’s bill for property taxes due in January for the property totals roughly $70,800, according to county records. Under the new ownership arrangement, the property would be tax-exempt.

Local educational institutions, including CFCC and the University of North Carolina Wilmington, have made efforts to increase class sizes to address the high demand for health care workers.

A total of 75 students graduated from CFCC’s associate degree nursing and licensed practical nurse to registered nurse programs this year. Enrollment for the May 2023 graduating class was 125 as of figures the college shared with the Greater Wilmington Business Journal in July.

If the county carries out its transaction, CFCC will continue using its existing nursing program space in Union Station, Johnson said, home to nursing classrooms and simulation labs.

Closing on the purchase would arrive following a due diligence period, including an environmental study, tenant review, inspection and appraising process.