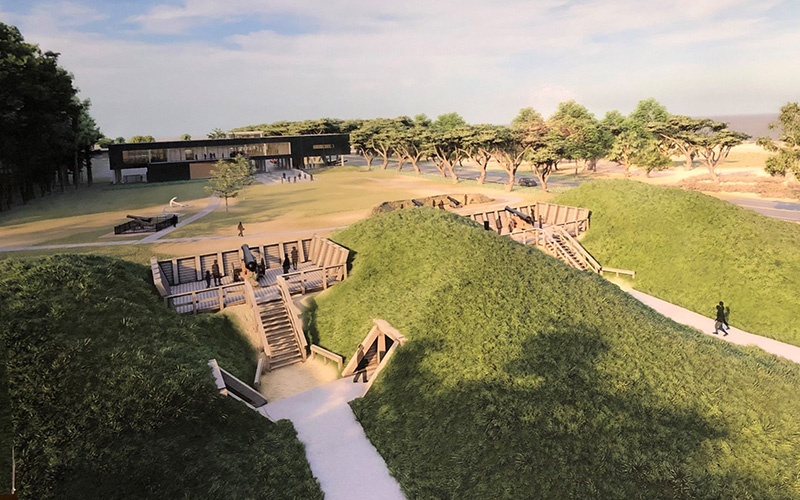 First up is completion of the new visitor center to replace the one constructed in Fort Fisher’s early days as a state historic site. Built in 1965, the facility is equipped to handle about 25,000 annual visitors.

These days, Fort Fisher draws much larger crowds as the most visited of the state’s 27 historic sites. Last year, it topped 1 million visitors. These numbers illustrate the need for updated facilities according to Ty Rowell, chairman of the Friends of Fort Fisher.

“We rival Gettysburg in terms of numbers,” Rowell said. “We need to build this because they’re already here.”

Although Gettysburg is one of the most iconic Civil War sites, Fort Fisher played a crucial role in that chapter of the nation’s history. The site protected the entrance to Wilmington’s port for blockade runners, fast ships that defied the federal government’s blockade to deliver supplies to the South.  Dozens of earthen mounds as tall as 35 feet and topped with powerful artillery fortified a mile of the coastline near the mouth of the Cape Fear River. These defenses kept Wilmington’s port open until January 1965, when a successful Union attack by land and sea closed the last lifeline of the Confederate war effort. The Confederacy capitulated within months of Fort Fisher’s fall.

School groups, active military members and Civil War history buffs are naturally among the site’s regular visitors, but Fort Fisher draws a broader crowd. Si Lawrence III, the site’s public information officer, attributes this to the facility’s proximity to tourist destinations such as Pleasure Island’s beaches and the N.C. Aquarium at Fort Fisher.

“We see a lot of traffic. It’s not only the history buffs,” Lawrence said.
Inadequate facilities have prevented staff from telling a fuller story of the site’s history. The new visitor center will provide 22,000 square feet of space, including room for multiple exhibits and a 100-seat auditorium for speakers.

“We want to provide an arena of history and tell a story that people will really appreciate when they get here,” Lawrence said.

Construction on the visitor center is estimated to finish in April 2024, and Lawrence said the museum is already brainstorming how to utilize new exhibit space to display artifacts previously kept out of sight.

“We’re trying to use that time to make as many plans as we can, to set up and include in the new facility those items that we think are highest impact in telling the story of Fort Fisher,” Lawrence said.

Visitors to the new facility can expect a richer portrayal of all parties involved in Fort Fisher’s history, officials said. Among them are the enslaved people, including members of the Lumbee Tribe of North Carolina, who were forced into the years-long task of constructing the site’s defenses, as well as the Union troops who breached those defenses in 1965. Dozens of the federal soldiers were awarded medals of honor following the fight, Rowell said, and among them were free Black soldiers with the U.S. Colored Troops.

“It’s a story of all the people. It’s not just a one-dimensional story,” Rowell said. “We’re hoping this new building will let us do that.”

The Friends of Fort Fisher was instrumental in securing the $25.5 million needed for the first phase of improvements at the site, which will also fund a new conservation lab on site for the Underwater Archaeology Branch of the N.C. Office of State Archaeology. Nearly a million dollars was secured from private donations, but most of the funds came through periodic installments in the state’s budget secured by the area’s local delegation in the N.C. General Assembly.

Data from the first month of construction confirmed Lawrence’s suspicion that the site would see a dip in visitors during the 18 months of construction, but Fort Fisher intends to remain operational from the old visitor center throughout the process.

“We’re not as presentable as we’d like to be because there’s so much construction going on, but we’re still a very viable draw for the tourism industry,” Lawrence said. “We anticipate a lot of visitors nonetheless.”

The Friends of Fort Fisher is already at work raising money for phase two of improvements at the site, estimated to cost an additional $3.5 million. This money would fund reconstruction of three of Fort Fisher’s earthworks. All but a handful of the mounds that once lined the coastline near the fort have been demolished, and visitors are not generally allowed atop the existing mounds for preservation reasons.

In addition to a strong vantage point for defense purposes, the mounds housed many important operations during the war. A telegraph office, a field hospital, living quarters and storage depots for ammunition were some of the uses for the space inside the earthworks. These dynamic operations were connected by a series of underground tunnels.

“That was one huge, huge operation down there, and the fact that it’s 90% gone makes it difficult when you come down here to look at it,” Rowell said. “This is the remnants of what’s left.”

Accessible for visitors, the reconstructed earthworks would recreate these operations for visitors. If completed, Rowell expects the interpretative earthworks to be a unique attraction.

“It’s going to be the only Civil War site in the nation that will have that sort of visitor experience,” he said.