Making The Case For A Real-life Travel Agent 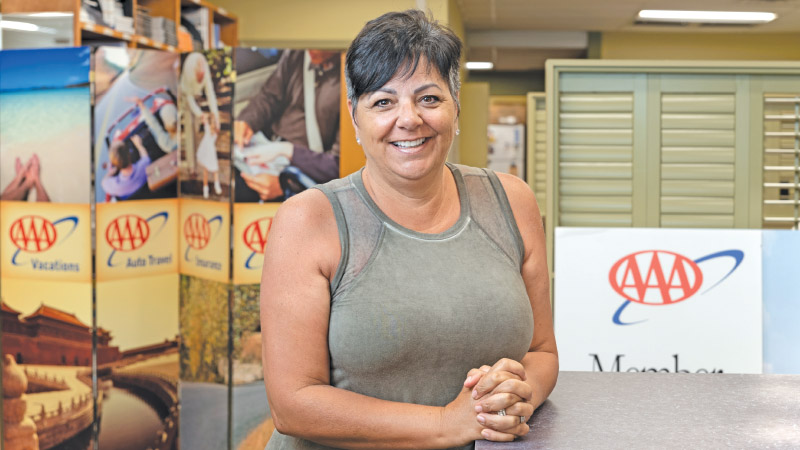 Sarah Hall, branch sales manager at AAA of the Carolinas’ office on Oleander Drive, says travelers are still turning to in-person help from travel agents even as online options grow. (Photo by Michael Cline Spencer)
With the internet and automation changing the landscape of many jobs, it is no surprise that online travel planning services would force the travel agency world to adapt. But people are still turning to real agents, opting for professional advice over online research done alone, according to local agents.

The online travel market has become saturated with services that allow people to plan and organize trips. According to Allied Market Research, this industry of websites that offer plane and rental bundling and other travel services will reach a vallue beyond $1 billion by 2022. But that has not stopped local, in-person travel agents from continuing to do their work.

A 35-year veteran of the field, Sarah Hall of AAA of the Carolinas said that these services are great for brief trips or personal research, but she’s found that people still prefer speaking face to face with an expert when it comes to traveling.

“We plan people’s vacations,” Hall said. “We try to match the vacation to what your needs are. We want it to be totally seamless for you when you come in because most people come in and they kind of don’t have any idea what they want to do or see.”

Hall said that in these appointments, experienced agents are able to get to the bottom of what a client needs by asking some qualifying questions.

“Where’ve you been? What have you done in the past? What do you want out of this experience?” Hall said. “And you would be amazed at what some people want and other people don’t want.”

Asking these questions is important, as not every traveler is the same, Hall said. Some are foodies, some want the best accommodations, and others want loads of fun activities. An agent is better able to get to the bottom of someone’s specific needs and requests, Hall said.

“Our job is to give them the advice and the guidance and the experiences that we’ve had to try to paint a picture so they can understand what vacation they’re going on and set those expectations,” Hall said.

George Benford of Travel by Patty Benford – a privately-owned, luxury travel agency run by Benford and his wife – said that he has seen a lot of change in the industry but still sees an interest in using travel agents.

Benford has been working in the travel agency world for 47 years, having worked with both brokering agencies and as the vice president of a consortium of travel agents. His wife, Patty Benford, has been in the business for 37 years, he said, at one time arranging transportation and trips for the military.

These days, the Benfords don’t usually handle smaller trips. George Benford said he and his wife handle mostly “luxury, upscale leisure travel” for about 100 clients and also work on one very large account – meetings and conferences for a hair salon product company.

Benford said that because their clientele differs and they run their business out of their home, they meet at home with clients. Those in the market for large, luxury vacations prefer the face-to-face expertise provided by the Benfords, he said.

When asked how digitization and the internet have impacted the travel agency industry, Hall said that people have had to adapt. Although there were rough periods of transition, ultimately locally-based travel agents had to adjust with the times or be left behind. And when it comes to mistakes made when planning trips entirely online, people will ultimately turn back to real agents for assistance, she said.

“Maybe 10 years ago we went through a little slump,” Hall said. “But I think people realized once you get burned on the internet and plan your own trip or have a mistake, who were you going to go to for help? I mean it’s so hard to get through to online agencies sometimes. For some people who want that customer service, you can come in here and sit down with us. Let’s have a conversation. Let’s see what’s wrong. We’re going to fix it; we are your advocates.”

Benford shares similar sentiments, remembering when airplane tickets were written out and airlines paid a commission to agents.

“We went through the change and deregulation of the airline industry and how that affected so many of the travel agencies,” Benford said. “There’s been a lot of changes in computers. Obviously, everyone having a laptop or something [on which] they can do research, some people say it’s been a detriment. I say it’s been an absolute positive for our industry.”

Hall and Benford agreed that the changes have allowed people to be more informed and prepared when they travel.

They agreed that a typical day-today is not the norm for travel agents. Often, traveling abroad can warrant the assistance of an agent, but there are also plenty of other reasons people seek out an agent. Whether it be for planning conferences, destination weddings, luxury trips or a first trip across the country, agents can streamline the process for consumers.

And Benford said he wanted to assure locals that getting a travel agent is not as expensive as most would think. Oftentimes, agents have the knowledge and connections to get consumers deals on flights and other costs that come with travel.

“What they don’t realize sometimes is that our knowledge saves them so much money and time when they’re on a trip instead of doubling back and forth,” Benford said. “We belong to a group called Ensemble Travel and [they] have specials at various hotels – might be free breakfast every day, might be airport transfers. That’s not going to show up online.”