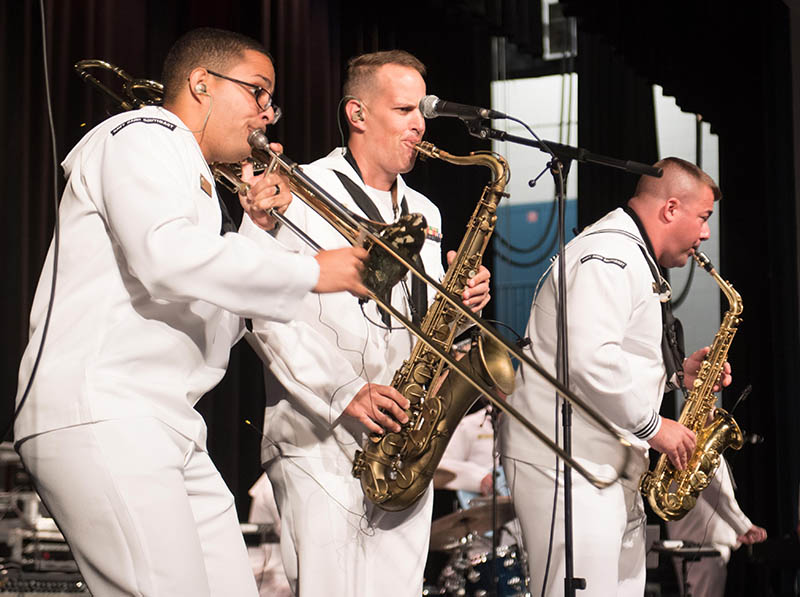 Visiting sailors perform during Tampa Navy Week events last year. Between 50 and 70 sailors are slated to visit Wilmington Navy Week in April. (Photo courtesy of NAVCO)
The U.S. Navy is coming to the Port City this spring, coinciding with the N.C. Azalea Festival. Wilmington is among the 14 selected sites – including Miami and Puerto Rico – to host Navy Week 2019.

Sailors from across the U.S. will participate in the outreach program sailing into Wilmington April 1-7.

Navy Weeks are designed to give people the opportunity to learn about the military branch and its importance to national security and prosperity, according to a news release by the Navy Office of Community Outreach (NAVCO).

“The purpose of Navy Week is to go into these cities and tell people about what their Navy is doing and why it’s important that we have it,” said Wilmington Navy Week Lead Planner Lt. Davis Anderson.

Cmdr. Linda Rojas, director of NAVCO, said in the release, “We’ve found that these exchanges have gone a long way for raising awareness of the Navy, expanding and strengthening community partnerships with the people we serve.”

Wilmington Navy Week will feature a variety of outreach assets, equipment and personnel for a weeklong series of engagements with key influencers and organizations representing all sectors of the market, said the release. Between 50 and 70 sailors are expected to be on-hand during the week, according to Anderson.

“We have a myriad of sailors that we’re going to bring, all the way from senior Navy executives to sailors in the (Navy) band [to] sailors in the Explosive Ordnance Disposal Unit,” Anderson said. “So these sailors are going to come in and talk about all the different aspects of the Navy and tell people about their jobs.

Visiting Navy personnel will have the opportunity to immerse themselves in the community, with sailors staying at local accommodations.

To increase its impact, NAVCO also partners with community groups, organizations and events already scheduled in a host city. In Wilmington’s case, the latter is the annual N.C. Azalea Festival, scheduled to take place April 3-7.

“My counterpart and I traveled to Wilmington in November to do an initial site visit and see where would be ideas to put sailors and to do our events, and we met with [Azalea Festival officials] … for how we could partner with them,” Anderson explained. “We’ll have sailors marching in the parade and going to different events during the Azalea Festival, in addition to the events surrounding [Navy Week].”

“Each of the units are able to talk to from children in preschool all the way up – I like to say we’re here to reach people from 2 to 92,” Anderson said. “Each unit is able to scale their presentation to talk about what they’re doing and then why it’s important to each different group.”

An estimated 75 outreach events will take place during Wilmington Navy Week. The schedule won’t be available until closer to the event.

“We’re building the schedule right now,” Anderson explained. “At least a month to two weeks before the actual Navy Week itself, people should be able to head to the website and see the list of events.”

For more information on Wilmington Navy Week and the calendar of events, visit outreach.navy.mil/ Navy-Weeks/Wilmington.