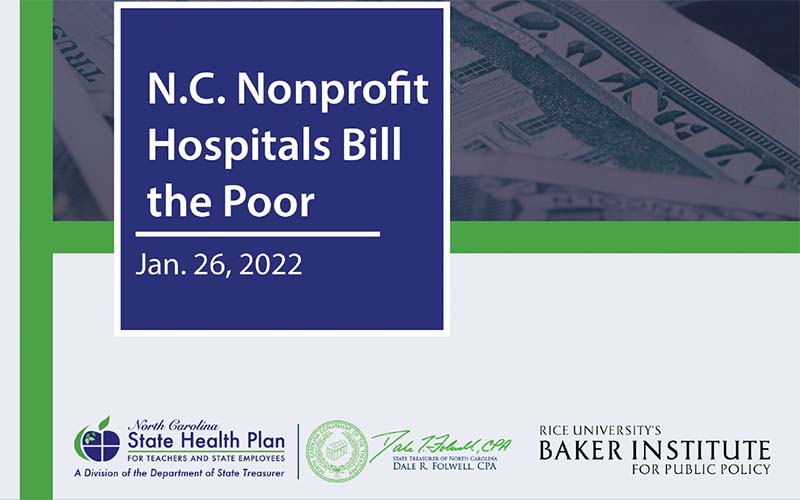 A report released Wednesday examines the prevalence of North Carolina nonprofit hospitals’ practice of billing poor patients who should otherwise be eligible for free or reduced service.

Compiled by the North Carolina State Health Plan and the National Academy of State Health Policy and peer-reviewed by Rice University researchers, the report details the often nebulous financial reporting process undertaken by nonprofit hospitals as it relates to their charitable spending.

It also highlights the lack of rules and oversight over nonprofit hospitals, which face little scrutiny from federal and state regulators.

“Everyone knows that something’s wrong,” State Treasurer Dale Folwell said in a press conference Wednesday addressing the report. The treasurer, who recently survived the ICU after a fight with COVID-19, said he was intentionally allowing himself to go into collections.

“I'm in collections on purpose because I want to see exactly what a person goes through when they don't pay their medical bills,” he said.

Folwell's initial stake in the fight against nonprofit hospital "cartels" is stabilizing the State Health Plan's ballooning health care premiums, which he has said are on an unsustainable path.

As part of meeting the requirement to provide charity care, nonprofit hospitals keep their emergency rooms open to all, regardless of income level, and generally offer free or reduced care to low-income patients.

Generally, hospitals won’t charge patients who earn less than 200% of the federal poverty level. New Hanover Regional Medical Center had this threshold in place before its sale to Novant Health, which beefed up the hospital’s charitable ceiling to 300% of the federal poverty level (this caps eligible income at $40,770 for a family of one and $83,250 for a family of four).

In North Carolina, nonprofit hospitals billed low-income patients who would otherwise be eligible for charity care at a rate higher than the national average, according to the report.

Hospitals attributed an estimated 12% to nearly 29% of their “bad debt” – debt incurred from the hospital that it won’t or can’t recoup – to patients otherwise eligible to receive charity care. This means low-income patients who ought to have been considered charity care, and therefore exempt from paying, were moved into the hospital’s bad debt category, which may involve the use of collections agencies that can damage credit history.

“Those $0s can't be accurate because those $0s are being reported by hospitals in counties with relatively high poverty rates,” Vivian Ho, Rice University’s health economics chair, said in a press conference organized by the North Carolina State Treasurer’s office Wednesday.

Novant Health justified its $0 figure by reporting it has established a “systemwide corporate policy with standardized guidelines,” according to its 2019 tax form. “Funds are generally not tracked after being granted, as the original eligibility and selection criteria have already been met,” the hospital reported to the IRS. It reported $16.6 million in bad debt in total.

A spokesperson for Novant said the hospital uses technology to determine whether patients qualify for a state-funded program or its own charity care. Patients are contacted by phone and/or mail by Novant's financial navigators, its "Guarator Collection" team, and a Medicaid vendor, which update their accounts.

"This ensures that those patients who fall within our charity care policy are billed appropriately," the spokesperson wrote in an email.

“It’s important to underscore that anyone who comes through our hospital doors is treated regardless of their ability to pay and unlike other businesses, what we are paid for our services is determined by insurers and the government,” the spokesperson wrote in a Wednesday email.

Novant’s standing charity care program covers an estimated 90% of uninsured patients; the remaining 10% who earn above guidelines are offered a discount on their bills, “which means that patients in this category will not pay more than what an average insurance company may pay,” according to the spokesperson. “We have financial navigators available to assist each patient in exploring all payment options available to them, including payment plans.”

Wednesday’s report comes on the heels of a similar report requested and released by the treasurer’s office in October 2021. That study detailed how statewide nonprofit hospitals operate with profit margins higher than the national average and provide less charity care than they save on taxes.

“In North Carolina, there is no public agency or official who actively enforces how nonprofit hospitals honor their charitable mission,” the latest report states. “Policymakers should consider requiring a benchmark level of charity care spending from profitable hospitals, as well as limiting or even rescinding the nonprofit status of hospitals with insufficient community benefits.”

"Attacking and demonizing hospitals while their exhausted employees are working 24/7 to meet a pandemic peak in hospitalizations is distracting, disrespectful and potentially dangerous," the release states, describing the treasurer's timing as "unconscionable."

With hospital staff seeing an uptick in violence associated with COVID-19 fears, the association described the treasurer's move to "leverage" ongoing public high anxiety as "deplorable and disrespectful."

Update: This article has been updated to include additional statements from Novant.