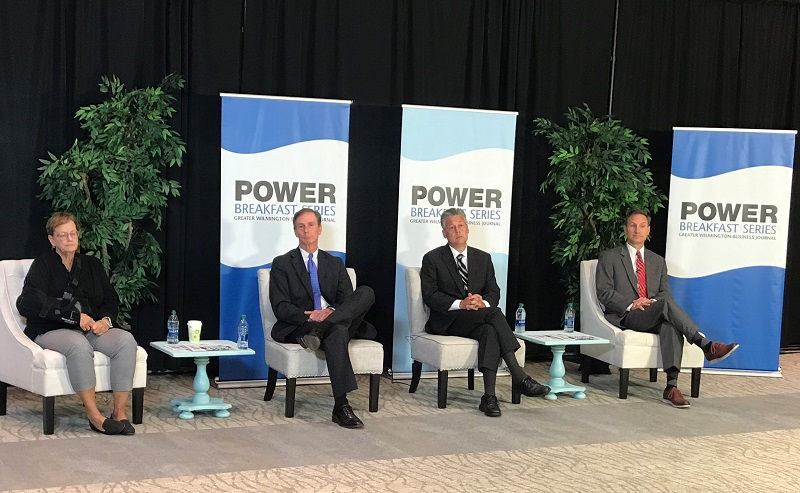 Broadhurst, co-chair of the 21-member Partnership Advisory Group (PAG) that is considering NHRMC's future, discussed Atrium's announcement at the Greater Wilmington Business Journal's Power Breakfast on Thursday, as well as proposals from the other two frontrunners -- Duke Health and Novant Health -- in the nearly yearlong evaluation process.

"I think the Novant offer from the beginning was closer to market value, and that the others quite frankly undervalue not only financially, but from a delivery standpoint, what this medical center, means to this area," Broadhurst said, referring to the six proposals initally submitted to buy or partner with NHRMC.

Novant's proposal offered up to $2 billion to New Hanover County for buying the county-owned hospital and $3.1 billion investment in strategic master plan projects over the next decade.

Atrium initially proposed a 40-year lease instead of a purchase, but in an announcement late Wednesday night said it was willing to also add the purchase option, an option that would essentially equal over $2 billion, with $200 million of that in upfront cash to New Hanover County at a potential closing and ongoing payments for 15 years.

"The offer that Novant made and the increased offer [from Atrium] here is getting closer to what I consider the value of the total enterprise, as opposed it to being an outlier," Broadhurst said. "The change from last night just kind of validates that."

Duke Health also said it is open to different options, including to either pay $500 million and let New Hanover County keep NHRMC's net cash and $1.9 billion for the fund the hospital's 12-year capital plan. Or, alternatively, it proposed an acquisition offer of $1.35-$1.4 billion for an all-cash closing.

Due to state restrictions on gatherings because of the COVID-19 pandemic, the event was streamed live on the Business Journal and WECT's Facebook pages and WECT.com.

Atrium Health is one of three health systems at the top of the list for proposals submitted.

The panelists said options being weighed are to not make a deal with any health system and keeping things as they are or restructuring of NHRMC's current model.

"To me as we think about status quo, versus restructuring, versus any one of these three partners, it's about securing the future of health care," said John Gizdic, NHRMC president and CEO and another of Thursday's panelists.

Finances are just one of 18 measures being evaluated in the health systems' proposals, said Barb Biehner, another PAG co-chair.

And while the proposals and much of the process has been open to the public, PAG's scoring process on those measures are not being released. The letters of intent (LOI) being negotiated with the three health systems will not be made public, Gizdic said, citing the competitive negotiation process.

The final definitive agreement, however, will have to be posted publicly for at least 10 days before New Hanover County commissioners can act on it.

“That is actually one of the benefits of being a county-owned hospital going through this process is that the law requires, unlike any other set of transactions in health care, the law requires this amount of disclosure,” New Hanover County Manager Chris Coudriet said.

Both Coudriet and Gizdic said this isn't the first time such a restructure has been explored by the county and its hospital.

"And no matter what happens with this process, if there is a decision to remain as we are, it's likely this examination is going to happen again," Coudriet said.

PAG members could take a vote in July on their recommendation to county commissioners, but what that recommendation might be, Coudriet said, is still to be determined.

"I don't yet know ... where the PAG stands. We're still going through a learning and evaluation of what is the right thing to recommend to the commission," Coudriet said.

"The PAG, our leadership, presented to the board just this past Monday and certainly suggested that probably the work is beginning to wind down," he added, "and we likely will be back as an advisory group in July to make recommendations that could be: keep talking; could be, of all of the options this particular one makes the most sense; it maybe this is a letter of intent that should be explored more thoroughly."

New Hanover County Commissioner Woody White, one of five commissioners who will make a final vote any deal -- which also has to receive approval from hospital trustees -- posted a comment on Facebook during the event that said, "No serious person looking at this issue objectively, which is the fiduciary duty I have, and have followed, could possibly believe that independent status for the future is a better option than one of these potential acquirers."

Some members of the community through Facebook, including Kevin O'Grady, a Wilmington City Council member, also expressed concerns over the PAG process, changes to the hospital, the potential rise in health care prices and impact on local health care jobs.

"No consideration about not selling. This decision was made before the 'question' was asked," O'Grady said of the process.

The top three proposals are from not-for-profit health systems. But when asked what's to prevent these health systems from selling the hospital off to a for-profit group down the road, Broadhurst said that is being addressed in the workings of the LOI process.

"It is not that easy to convert from not-for-profit to for-profit in health care, and especially in the state of North Carolina, that is a very delineated, detailed process that requires state and federal regulatory approvals," Gizdic added.

With each proposal, the LOI will define a lot of the terms that PAG is concerned about, said Biehner.

"Staff, future sale, use of capital, those types of things," she said. "And depending on which one, if it were to be chosen to pick one of them, we will go into a definitive agreement that would be very clear as to anything like that, that would allow a future sale and really continue to have that control."

Job security and pensions for NHRMC employees would also be in the LOI for each health system, Gizdic said.

“We evaluate whether we can continue providing a pension every single year. We are one of the few organizations and one of the few health systems left in the state of North Carolina that offers a pension,” Gizdic said. "But that may not always be financially feasible whether we partner or don't partner. And so their benefits, as far as pension, are absolutely secure. And what happens with the future of a pension, quite frankly is unknown whether we partner or not."

The next PAG meeting starts at 5:30 p.m. Thursday at the University of North Carolina Wilmington's Burney Center. The public also can watch the open portions of the meetings through this Zoom link.

And next week, New Hanover County Commissioners are scheduled hold a public hearing at 5 p.m. Monday at the New Hanover County Historic Courthouse to discuss all six proposals that were received to partner with NHRMC. For more details, including in-person and virtual options to watch and how to share comments, click here.

Other proposals that were submitted came from HCA Healthcare, HealthSpan and UNC Health.