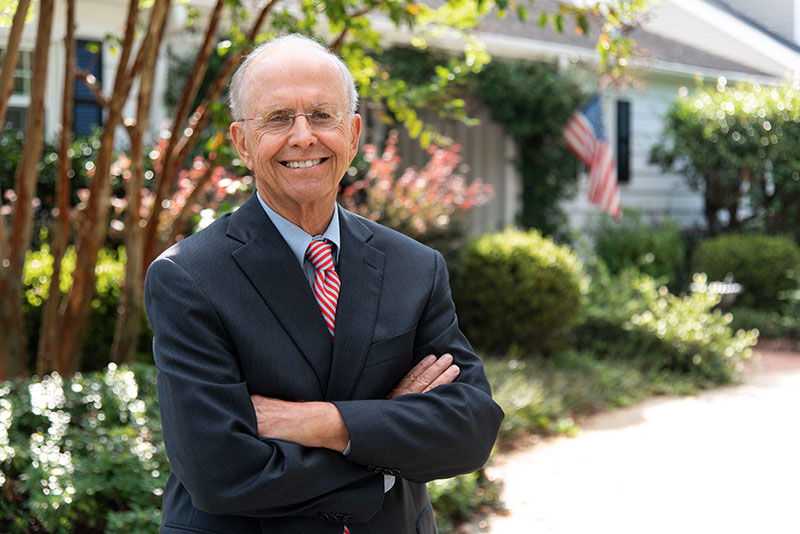 Retired orthopedic surgeon James D. Hundley was president of Wilmington Orthopaedic Group until his retirement in 2008. (photo by Michael Cline Spencer)
Retirement form the practice of medicine hasn’t meant retirement from the many causes and organizations that have benefited from the talents of James D. Hundley.

The database he founded with another physician, OrthopaedicLIST. com, serves physicians and nurses worldwide in locating orthopedic products and services.

Throughout his career, Hundley served in leadership roles in several organization including presidency of the N.C. Orthopaedic Association. He was involved in establishment of a premedical scholarship for Univer­sity of North Carolina Wilmington students through the New Ha­nover-Pender Medical Society, and was a member of the New Hanover County Library Advisory Board, which converted the old Belk Berry department store on Third Street to the county’s main library branch.

“I joined the Rotary Club during my first year in town, also. Al­though I became and enjoyed being president, the most gratifying role was helping as staff and ultimately director of the Crippled Children’s Clinic, a free clinic for children with orthopaedic impairment. This clinic ultimately closed because Medicaid made it unnecessary,” he wrote in a recent email while touring Italy with his wife in October.

He added that any time he hears someone disparage young people, he has many stories of students he’s met who prove otherwise.

Originally from Wallace, Hundley said the small-town atmosphere was “a great place to grow up. Probably best of all, it was not too hard to succeed in school, so we left there thinking we could do anything we were willing to work for.”

Born to a family physician and a school teacher (who became a full-time homemaker when her children were born), Hundley went to Uni­versity of North Carolina at Chapel Hill believing he wanted to be an attorney.

That quickly changed, and his load of prerequisite courses changed to the sciences while earning an English degree.

During his second year in medical school, also at UNC, he spent six weeks, thanks to a Duke Foundation grant working at Lenoir Memorial Hospital, where he was able to spend time in the operating room with orthopedic surgeons.

“I really enjoyed it, felt I had a knack for orthopaedics and pursued that goal thereafter,” he wrote.

After graduation he served in an internship at Shands Teaching Hos­pital, residency at UNC Hospitals and a research fellowship at UNC’s pharmacology department.

Following graduation, he served two years in the U.S. Air Force Medical Corps before joining Wilm­ington Orthopaedic Group, where he became president and managing physician leading up to his retirement from active practice in 2008.

In 2012, Wilmington Orthopaedic Group merged with Atlantic Ortho­pedics to become OrthoWilmington, which eventually turned into Emer­geOrtho.

Certified by the American Board of Orthopaedic Surgery, Hundley was appointed to the medical staff at New Hanover Regional Medical Center in 1975.

In 2010, he co-founded and served as vice president for research of GO2 LLC. He served as a consultant for AssistedCare Management Group from 2011 forward and was a phy­sician associate with MedSurgPI beginning in 2017.

Since he began practicing, Hun­dley said medicine has changed drastically, particularly the technical improvements in orthopedics.

“During my time, total joint re­placement, arthroscopic surgery and the operative treatment of fractures have come of age,” he said. “Where we would put patients in casts many years ago, surgeons now stabilize broken bones with plates and rods whenever possible. In that way, the bones can be restored to or nearly to normal and functionality can be better restored. Currently biolog­ic treatment of joint problems is evolving and hopefully someday soon there will be less need for some of the joint replacements now needed.”

He also noted the considerable increase in expense for treatment but contrasted that with the vast im­provement in outcome.

“I’ll never forget going with my father who was making a home visit to a patient with a heart attack. The treatment: a shot of Demerol for pain. It probably cost the patient $5. I have no idea the outcome of that patient,” he recalled. “Today, he would be airlifted to a cardiac center and undergo an emergency cardiac catheterization followed by a coro­nary stent or bypass surgery. There is a good chance that he would not only live, but he may have no damage to his cardiac muscle allowing him to re­turn to a normal life. The cost would be tens of thousands of dollars. Which would you choose?”

He received the Order of the Long Leaf Pine in 2007, and the UNCW College of Health and Human Ser­vices Unsung Hero Award in 2016.

An avid fisherman, Hundley said he chose Wilmington to live in because of its easy access to the great outdoors.

Over the years, he and friends have participated in numerous king mack­erel tournaments and other sporting activities.

“We enjoyed Wilmington and the beaches and did not feel a strong urge to travel the world,” he said.

Now that he’s retired, he and his wife have enjoyed cruises through Europe, but he’s quick to return to the town he adopted and the lifestyle it affords.