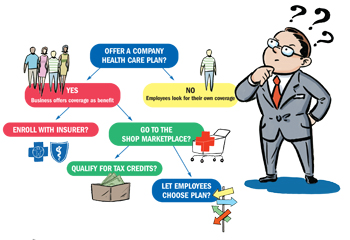 Illustration by Mark Weber
For small business, the next step in the Affordable Care Act, also know as Obamacare, is right around the corner.

With the second year of enrollment about to start this month under the ACA, many small business owners and employees will face another round of decisions about their health insurance coverage for next year.

While small businesses – under 50 full-time workers – do not face the same tax penalties as larger firms for not offering health insurance coverage to employees, companies that do want to continue the benefit will wade through a range of options about how to go about it.
This year, for example, North Carolina employers can tap an online insurance exchange specifically for small businesses similar to the individual marketplaces that opened up last year as part of ACA.

“I would say in general, yes, there’s a lot of confusion and confusion often leads to being stagnant,” Parks Carpenter, an account representative with Mann & Watters Insurance and Employee Benefits in Wilmington, said about ACA. “They stay where they are and get stagnant rather than find an expert to answer questions.”

The ACA, with all its twists and turns and deadline extensions, “has gotten a lot more complicated,” Carpenter said.

“Not everybody understands everything to the same degree. Some people have been reading up on it, and some people don’t have the tools other people have,” he said. “Everyone has got varying degrees of understanding.”

The SHOP exchange will be accessible through the marketplace beginning Nov. 15.
Nov. 15 also is the start date for employees who purchase health insurance plans from the federally run marketplace as individuals and are signing up for coverage or renewing, pointed out Ryan Vulcan, spokeswoman for Blue Cross and Blue Shield of North Carolina.

Enrollment on the individual and small business exchanges lasts through Feb. 15 for health insurance coverage next year.

An individual without health insurance faces a tax penalty of either 2 percent of his or her annual household income that is above a tax filing threshold of about $10,000 or $325 for the year, whichever is higher.

Small businesses, however, are exempt from tax penalties for not providing coverage. Large employers next year will have to cover at least 70 percent of their full-time employees to avoid a penalty, and medium-sized businesses received an additional year, until 2016, to comply with the employer mandate.

Though some states have set up their own exchanges, North Carolina is one that has deferred to the federal government-run portals.

Employers can use the SHOP exchange as a way to compare plans for employees and to apply for tax breaks if they qualify.

For 2015 coverage, the SHOP Marketplace is open to employers with 50 or fewer full-time equivalent employees, or FTEs. In 2016, those with 100 or fewer FTEs can use the exchange.
Only those with fewer than 25 workers and that fall into a pay bracket where their average salary is $50,000 and less a year are eligible for tax credits and subsidies on the SHOP, Carpenter said.

Those temporary tax credits, good for two consecutive years, run up to 50 percent on how much the employer pays on workers’ premiums, as long as the employer covers at least half the premium costs.

Blue Cross and Blue Shield of North Carolina (BCBSNC), the state’s largest health insurer, decided to allow so-called grandfathered and transitional plans to be renewed for another year if employers chose to keep those.

The federal government allowed insurers to decide whether or not to extend some plans already in place – if an employer had a plan before the ACA passed in 2010 and kept their grandfathered small group coverage intact, for example – to continue on into 2017 without all the coverage requirements and premium impacts from ACA.

Transitional plans also will be extended for another year if employers choose to do so. Those are benefit plans that were in place as of Oct. 1, 2013.

“As part of the federal transitional program, BCBSNC is offering current small group customers the option to keep their existing plan into 2015. This gives employers another plan option for their employees,” Vulcan said.
“BCBSNC understands the concern businesses have regarding the implementation of the ACA and its effect on their employees. It is important for businesses to consult industry experts and not to make these decisions alone,” she said. “We encourage business owners and benefit managers to contact licensed agents or a BCBSNC representative to learn about the choices available to them.”

Jeff James, president and CEO of Wilmington Health, offered another perspective on what affect the Affordable Care Act will have on businesses of small to moderate size.

“From an employer perspective, we are dealing with the same types of things everyone else is dealing with,” he said in an email response to questions. “We have had to adjust our plan design to accommodate some of the mandates, including the covering of preventative visits and the ability for dependents to remain on the plan until the age of 26 in some instances.”

ACA mandates include additional reporting requirements, which cause the administration costs to increase marginally as well, James said.

The looming issue is the so-called Cadillac tax coming in 2018, he said.

Starting in 2018, an excise tax will apply on high-end health plans. The plans typically come with lower deductibles or copays for employees.

While the upcoming tax on the plans – 40 percent on anything spent on benefit plans over $10,200 for an individual – is a much-debated part of the ACA, critics of the plans themselves say they buffer enrolled employees from health care costs since they don’t contribute as much in out-of-pocket costs.

Because of these and other shifts, employers might start taking a closer look at the health care delivery end.

James pointed out that procedure costs vary dramatically, even in Wilmington, for the same services. For Medicare patients, he said, the cost for the same procedure could vary by 72 percent simply based on where the service is provided.

“Twenty percent of that comes out of the pocket of the patient,” he said.

Cardiac testing can be as much as 250 percent higher, depending on location of service that the physician chooses, James added.

“I would advise these companies to design their plans to heavily incentives their employees to utilize the lowest cost center of care for procedures and testing,” James said.

“My advice for other organizations and individuals is probably not the usual,” he said. “The biggest thing they can do to ensure they are getting the best value is to demand transparency around cost and quality in their interactions with the health care system.”

Unlike mid- and large-sized companies, small business do not face tax penalties under the Affordable Care Act, or ACA, if they don’t offer health insurance coverage for full-time employees.

After a delay last year, the Small Business Health Options Program, or SHOP, Marketplace insurance exchange will be available during this year’s open enrollment online.

BCBSNC, the state’s largest health insurer, decided to allow grandfathered small group plans for another year. Those plans, already in place when ACA passed in 2010, do not have to adopt all the law’s changes.

Firms with fewer than 25 full-time employees who buy coverage through the SHOP and pay for at least half of workers’ health premium costs might qualify for a tax credit. The credit is up to 50 percent of the employer’s contribution – up to 35 percent for tax-exempt groups – and can only be taken for two years.

The ability of employees to have control over their plan choices is intended to be part of the SHOP exchange, but not just yet in North Carolina. The state was one of 18 approved for a delay in the employee choice option until 2016.