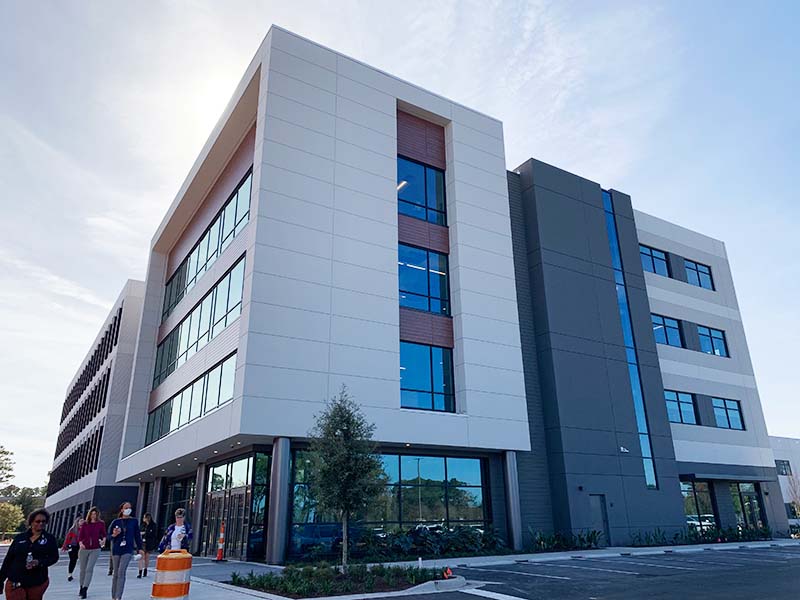 No one can move in just yet; that won’t come until sometime next year, as contractors await final electrical equipment deliveries, delayed by supply chain issues. Still, the building’s bones are completed, and county officials shared their eager sentiments about the planned move next door at the ceremony.

“People are no longer going to have to meander through the building looking for the right department,” said county manager Chris Coudriet. “I still have a hard time remembering sometimes where to go and I've worked in the building over 15 years.”

The project will be delivered “under budget” and “really close to on time,” according to Commissioner Deb Hays (a county spokesperson said the final cost is not yet known but that it will fall under the $52 million total project budget).

About 300 county employees will move into the new facility, which was erected adjacent to the county’s current government center, a former shopping mall renovated in the early 2000s.

Once the county’s operations shift to the new building, demolition of the current structure, built in 1982, will begin. Only Breaktime Billiards and Ten Pin Alley will remain.

The soon-to-be-demolished portion will be transformed into a private development spearheaded by Cape Fear FD Stonewater, which also oversaw the development of the nearly complete public portion of the project.

Developers aim to begin demolition early next year to construct “Proximity – Government Center,” which is slated to include residential and commercial space.

Per the county’s development agreement with Cape Fear FD Stonewater approved last year, the private portion of the property will include a mixed-use development with at least 5% workforce housing. Final plans will be presented to the county and commissioners to receive input prior to the onset of construction.

The new public facility, designed by LS3P and built by Thomas Construction, is a four-story and roughly 137,000-square-foot complex. Customer service was at the heart of the building design, officials shared Monday, which includes a catch-all kiosk with representatives for residents to speak with upon first entering.

Windows are aplenty – a welcome feature for county staff.  “Every floor is built around the idea of sunlight and understanding what's happening in our natural environment,” Coudriet said. “Most of you have worked in the dark – well, I mean, we do have electricity, but you’ve worked in the dark for the whole time that we've been here, and you deserve to know what the weather is doing, before you walk outside, to go to lunch or to go home.”

Multiple consultants have been tapped to help the county transition its 911 center operations into the new structure, and several partner agencies in the region will assist in taking on call volume during the complicated transfer process.

The new 911 and emergency operations center portion is rated to withstand 165 mph winds.

Soon, work will begin on a public lawn, to be installed in between the public and private facilities. “After that public lawn is open, the commercial and residential components are going to bring this entire site to life,” Coudriet said. “This is going to be a vibrant, active part of our community.”