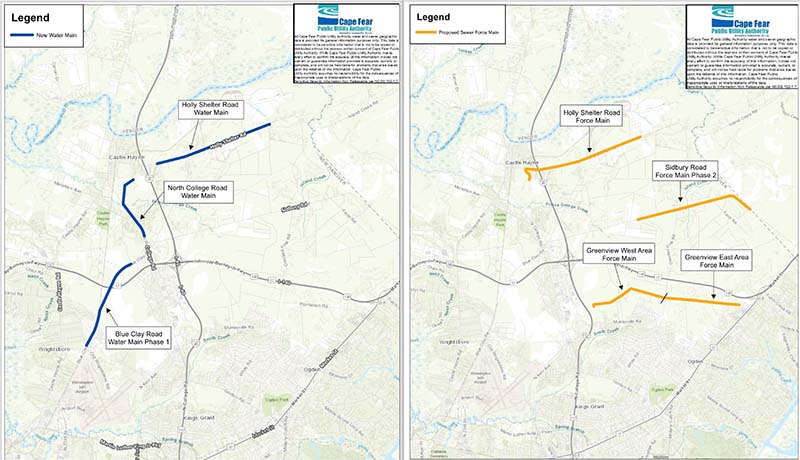 The New Hanover County Board of Commissioners will consider signing an interlocal agreement with Cape Fear Public Utility Authority at its meeting Monday regarding the proposed installation of an estimated $23.5 million infrastructure project in the northern end of the county.

Developers have frequently cited incomplete or inadequate infrastructure in this area of the county as a deterrent to growth. With much of the city and county already built out, northern New Hanover County contains some of the last remaining large undeveloped tracts.

Under the proposed interlocal agreement, the county will cover the cost of planning and building the infrastructure, while CFPUA will manage the project and maintain it once it’s done. CFPUA's board approved the agreement Wednesday.

"Since the adoption of the Comprehensive Plan in 2016, New Hanover County has identified these areas as having opportunity for growth," chief strategy officer Jennifer Rigby wrote in an email. "The vision for New Hanover County, one of the most urbanized counties in North Carolina, is to have the urban services necessary to support the needs of our growing community.

"Additionally, water and sewer expansion eliminate the need for wells and septic fields which ultimately protect our groundwater. This is New Hanover County’s last frontier and we are excited about the opportunity to bring urban services to this part of the county," she said.

Through the latest county budget, commissioners already appropriated $3 million through the capital improvement plan under the line item, “CFPUA: Last Frontier Water/Sewer.” These funds will support the design work, according to the latest agenda item.

A preliminary engineering report estimated it would cost $23.5 million complete the work; a true amount won’t be known until after a bid process is complete. Design work is expected to wrap up by late next year and infrastructure is anticipated to be operational by summer 2026.

The source of funds will be debt proceeds, according to county chief financial officer Eric Credle.

The county is willing to take on the project to, according to the agenda item: “(a) facilitate economic development at levels of density consistent with county land use planning; (b) enhance fire protection in northern New Hanover County; (c) enhance housing construction at more affordable costs; and/or (d) increase the population, taxable property, employment, industrial output and/or business prospects of the county.”

Nearby, work on another county infrastructure project to bring utilities to the Blue Clay Business Park is underway. Water and sewer infrastructure is expected to be installed by early next year, according to a county spokesperson. The county set aside $3.6 million from federal American Rescue Plan Act (ARPA) funds to finance the project.

In early recommendations outlining ARPA expenditures, the county had previously proposed allocating $4 million to install infrastructure along Sidbury Road but had to remove this proposal once federal officials further clarified spending requirements.