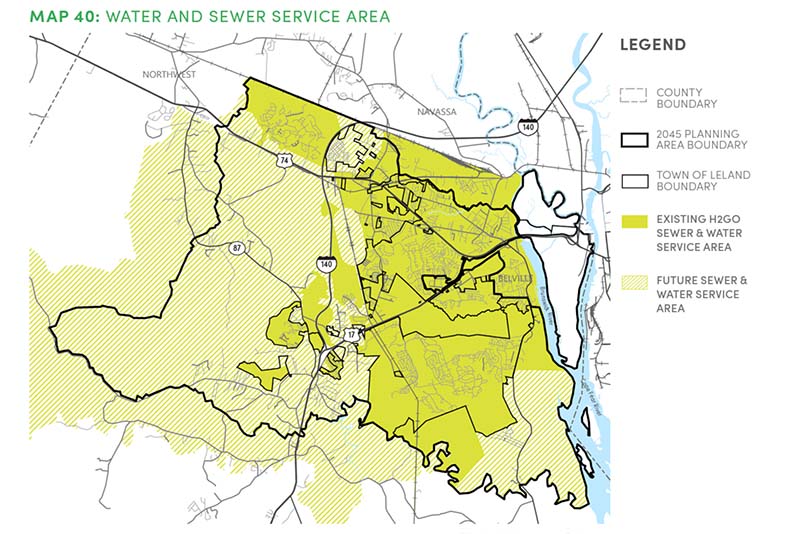 A confusing patchwork of utility providers in Northern Brunswick County was the backdrop of a merger that became subject to a new state law. (Photo courtesy of Leland)

A new state law has hamstrung the town of Leland’s authority to annex property well outside its primary corporate boundaries.

Senate Bill 911 automatically became law June 30. Because it’s a local bill, it did not require the governor’s signature, according to a spokesperson for the governor.

Passed unanimously by the Senate and 103-6 in the House (all local delegates voted in favor), the final version curtails the town’s reach when annexing satellite areas outside of town boundaries, limiting the distance from 3 to 1.5 miles.

A more restrictive version of the legislation was first introduced at the end of May by Sen. Bill Rabon (R-Brunswick, Pender and Bladen). As first presented, the bill would have outright banned the town’s ability to annex property for two years.

Leland "will obey this law like all others applicable to the Town,” town spokeswoman Jessica Jewell wrote in an email Friday.

The legislation is a long-brewing response to the town’s scrutinized arrangement that predicates the provision of utility service outside of town boundaries with annexation. Annexations in North Carolina must take place voluntarily; Leland's apparent carrot-dangling of utility service in exchange for annexation has introduced legal questions from critics.

The new law also includes the mandate that petitions for voluntary annexation into the town must now include a statement from the property owner affirming the request was not based on a representation by the town that utility service would be withheld if annexation was not sought.

Tyler Newman, president and CEO of Business Alliance for a Sound Economy (BASE), said he spoke with Rabon several times as the bill advanced. “He does a tremendous job in Raleigh representing our region and we appreciate his efforts to try to address this issue on a tight legislative timeline,” he said.

Newman said the new law “shouldn't restrict Leland's ability to grow inside its current footprint or along adjacent boundaries, but it likely puts an end to Leland satellite annexations."

Many satellite annexations in recent years have occurred down the U.S. 17 corridor, creeping farther west, or up the U.S. 74 corridor, inching farther north. Several recent annexations appear to be just within reach of Leland’s new 1.5-mile limit, but some, including the 321-acre Jeff Earp tract off Old Town Creek Road annexed in 2020, would have fallen outside of it (the new legislation only affects future annexations).

Northern Brunswick County has been home to many turf wars in recent decades, but this new law marks the first time in recent memory a local bill concerning the town’s growth has made it past the legislature.

It was brought about by last year’s merger between the town and Brunswick Regional Water & Sewer H2GO. In that merger, the town handed the sanitary district all of its utility assets as part of a joint undertaking and gained “the exclusive right to offer” utility service (provided by H2GO) to an area that spans far outside town boundaries. “In no event shall the provision of water and sewer services in the Area be provided by the Sanitary District, separate from Leland,” the agreement reads.

The geographic reach of H2GO differs from the town’s former utility layout, with large swaths of land falling well outside town limits more readily accessible to the sanitary district.

Leland has topped fastest-growing lists in recent years for its explosive population, currently ranked fourth in the state between 2020 and 2021 with 10% growth. The sanitary district’s presence predates the town, which was long a rural agricultural area before embracing its newfound identity as a retirement haven.

“The area in northern Brunswick County is growing rapidly and the Town of Leland is central to much of the growth,” Jewell said. “As the community continues to grow, it is important and reasonable that it does so in a way to benefit both the existing and future citizens of the area.”

There’s a mismatch of utility providers in the area, which also includes Brunswick County Public Utilities, creating a confusing patchwork of entities.

The merger quelled years of heated legal disputes and aimed to minimize utility competition, but it also brought about concerns and legal questions.

Asked about how many annexations resulted from the merger, Jewell said the petitions were voluntary. “We can’t necessarily confirm the reason they voluntarily annexed is to get utilities from our jointly-owned assets,” she said.

How exactly the new law impacts the merger remains to be seen. "H2GO will continue to provide water and sewer services with the purpose of promoting health and welfare of the people here in the North Brunswick area," H2GO spokesperson Stephanie Blair wrote in an email.

Sen. Rabon’s bill this year followed a bill filed by Rep. Frank Iler (R-Brunswick) two months after the 2021 merger passed that sought to limit the reach of sanitary districts outside of their corporate boundaries.

Two weeks later, the Brunswick County Board of Commissioners passed a resolution condemning Leland’s arrangement and encouraging the General Assembly to end the tit-for-tat arrangement: “This practice is not addressed by any specific statute and has resulted in what amounts to circumvention of the prohibitions against involuntary annexation.”

Iler suggested to Port City Daily last month that Rabon's concerns with the town involved his own property in Winnabow. Earlier this year, residents in Winnabow attempted to incorporate as a means to avoid annexation into Leland, fears the town characterized as misinformation.

BASE, which represents developers in the area, worked to amend this year’s legislation as first presented with Sen. Rabon after hearing from landowners that could have been caught in the middle. “To their credit, Leland has created some zoning districts and a stormwater permitting arrangement that was drawing investment," Newman said. "Our concern was landowners that were in the planning process or had made investments with the intent of annexing into Leland –– due to their favorable regulatory and zoning environment. In talking to Sen. Rabon, we were able to work out some of those concerns.”

Brunswick County has encouraged utility regionalization, and in recent years, has acquired Navassa and Northwest’s systems. Today, both the county and H2GO are building their own costly reverse osmosis water treatment systems; the county’s is sourcing from the Cape Fear River and H2GO’s will use an aquifer.

“In the big picture, our overarching goal is having efficient infrastructure so Northeast Brunswick County can continue to grow,” Newman said. “Maybe one day, instead of multiple providers, Brunswick County Utilities will be the sole water/sewer entity in Brunswick County. That would certainly make the process and public/private investment more streamlined.”