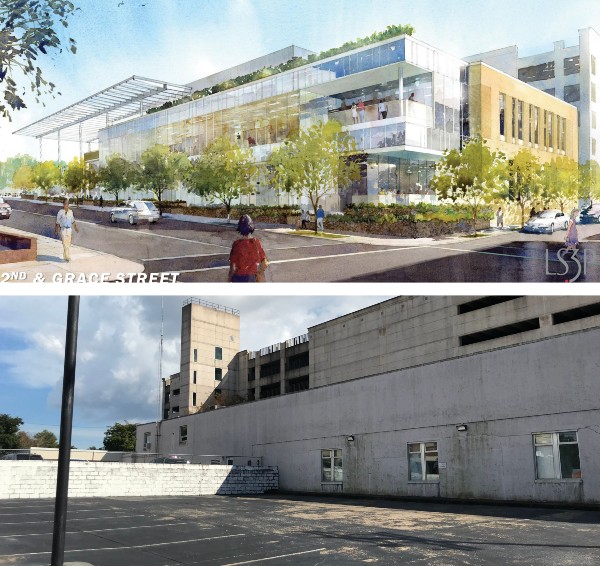 The schematic design of the public library and museum portion of Project Grace, shown from the Second and Grace streets side, with a photo showing the current look of that side of the block underneath. (Schematic by LS3P/photo by Cece Nunn)
With the unveiling of new pictures of the public side of Project Grace, what’s next for the major downtown Wilmington redevelopment plan?

The drawings, which show how Third and Grace streets and Second and Grace streets in the downtown block are expected to look with the new combined facilities, mark the end of one phase and the start of the next, design development.

This phase will include refining the design, with a potential January completion, said Jennifer Rigby, chief strategy officer for New Hanover County.

Meanwhile, Zimmer, the developer in the public-private partnership, continues to work on the private portion of the mixed-use development, Tucker said.

“We are looking at the south side of the block, on Chestnut Street, which will be a private development, and mixes have not been determined just yet. We do know we will have a multifamily component with a workforce housing piece to that,” Tucker said. “The unit count is still under discussion. We've got a very diverse mix of uses that we're talking to. I wish I could go further into it because it is very exciting.

Tucker said Zimmer officials hope to be able to announce more information about the private side in the next month or so.

In a memorandum of understanding that Zimmer Development and the county reached early this year, the library, museum and shared space is estimated to cost about $56.7 million. The MOU places a private apartment component's estimate at more than $23 million.

Mention of a potential city office portion of the redevelopment that could have cost more than $27 million didn't make it into the final MOU.

The initial year's turnkey net base rent cost to the county for the public facilities was estimated at a little over $4.5 million in the MOU. But the 20-year lease also has to get the green light from the Local Government Commission.

As for the project's timeline, Rigby said construction could start by summer 2022.

A county news release further explained the design development phase, stating, "With schematic design complete, the development team will begin working closely with a landscape architect, an exhibit designer for the museum exhibits, a structural engineer for the building and many other disciplines to ensure the details of the vision established in the discovery phase and schematic design are accomplished."

More on the museum and the library

Floor plans show that the library will continue to provide adult services, children's services and local history services, “adding enhanced teen and tween services to ensure all citizens have a place to learn and grow,” according to a county news release. “It will also have two outdoor reading terraces, one dedicated specifically to children on the first floor and one dedicated to adults on the second floor, and incorporate natural light throughout to ensure it is a welcoming and open space.” 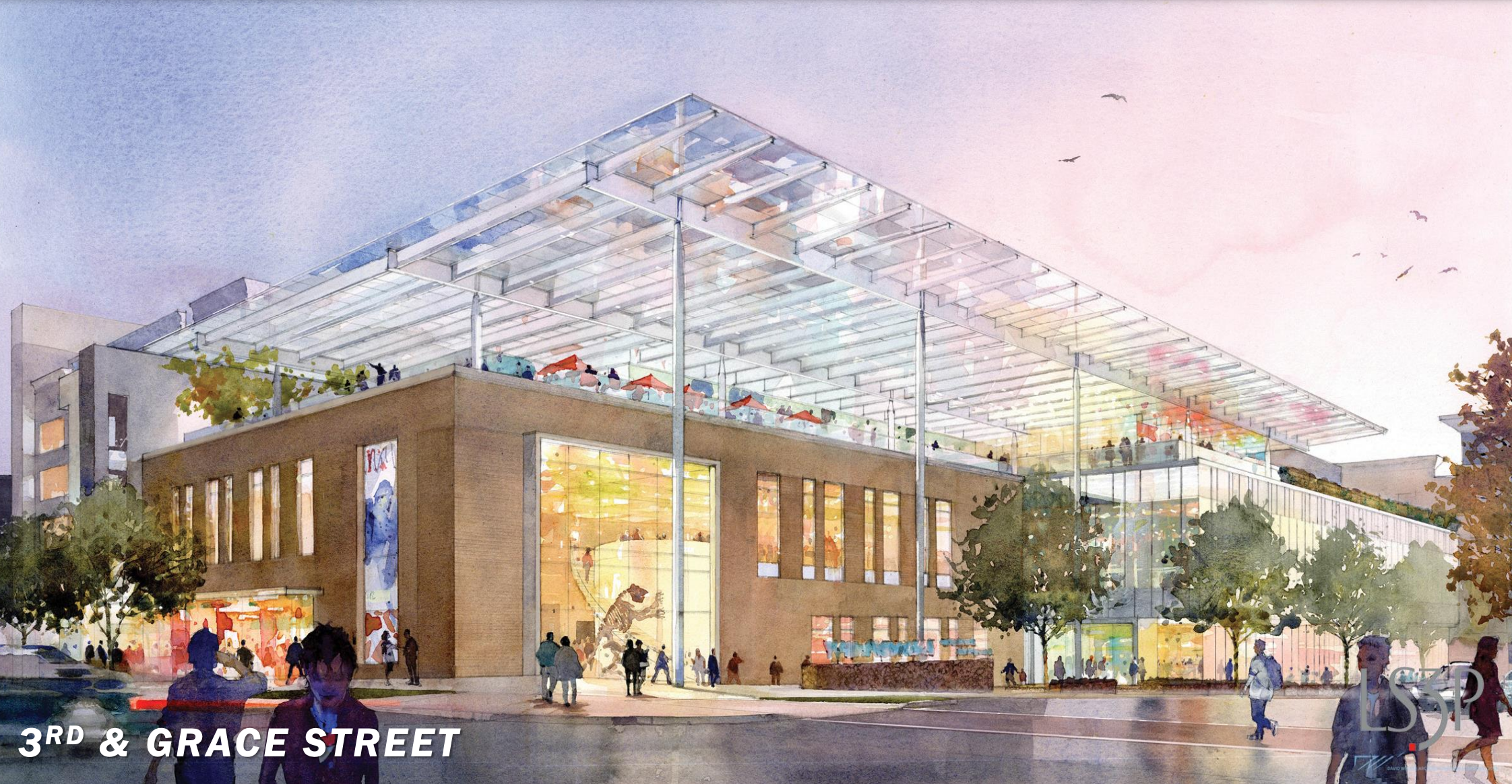 The new museum will have a planetarium/immersive theater, gallery for the Cape Fear Stories exhibit, a health and nutrition gallery, outdoor exhibit space, a Science Matters gallery and a changing gallery to accommodate more traveling exhibits, the release stated.

“There will also be plenty of outdoor space dedicated to the museum and for community celebrations and meetings,” according to the release, and the building will have shared multi-purpose space for additional programming.

Boney said, “Next year we celebrate our [LS3P’s] 100th year in Wilmington, designing and building, and I can't think of a better way to do it than to design what will really be the most important building perhaps in my lifetime, which is Project Grace.”

The county has also posted videos explaining the project.

While the redevelopment has been known as Project Grace for several years, officials said they are gathering ideas for a new name for the combined library and museum building. Individuals or groups can submit name ideas online from now until Oct. 18.