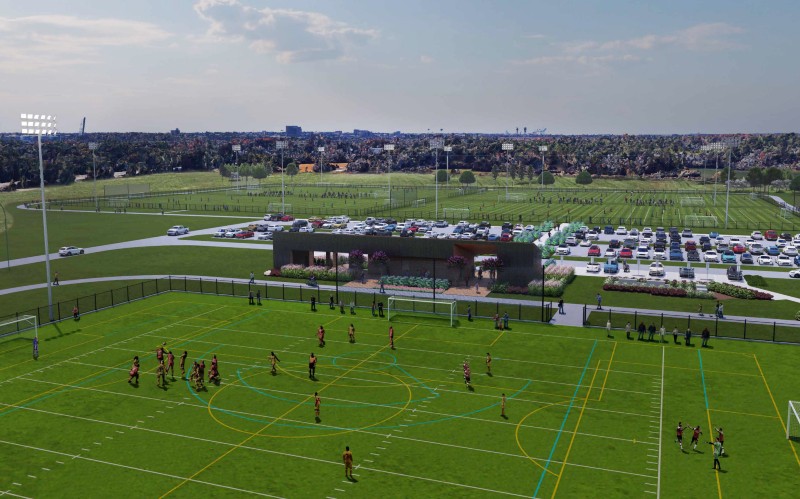 A rendering shows the anticipated look of the artificial turf field and amenities at the upcoming nCino Sports Park. (Courtesy of the city of Wilmington)
nCino Sports Park is expected to draw tens of thousands of parents and players when it opens, along with visitors coming to tournaments and the dollars they spend.

The city of Wilmington on Tuesday night approved a $1.3 million agreement with cloud banking firm nCino for a long-term sponsorship of the Port City sports complex, including naming the park after the rapidly growing company.

More fields like those that will be added for the sports park mean more options for local youth sports teams but also state and regional games.

"We've always talked about Wilmington being a wonderful place that people want to come to, to play in these tournaments, and even in its current state, we do two major [soccer] tournaments that sell out, and the economic impact is close to $10 million," said Carson Porter, executive director of Wilmington Hammerheads Youth Soccer, which will manage nCino Sports Park. "So the idea of ... a sports park, and the idea of an improvement, of larger, more fields, just gives us a chance to go from good to great."

Porter said the park will support other sports in addition to soccer, including rugby, lacrosse and pretty much any sport that needs a rectangular field.

"I've already started talking to people about the sports park and bringing in major events, and we're excited to get that going," Porter said.

nCino Sports Park is expected to hold 11 fields, including an artificial turf field, and outdoor lighting, among other amenities. Seven fields already exist as part of the Cape Fear Regional Soccer Park, which will be incorporated into nCino Sports Park.

The new park, on 65 acres at 205 Sutton Steam Plant Road, is part of the 2016 voter-approved parks bond, which allocated $10 million for the project.

The Wilmington Hammerheads Youth Soccer donated the land and the park is expected to be complete by the fall of 2022.

Without nCino's sponsorship, the city still would have been able to fund the artificial turf field required for the company's sponsorship, "but it was a challenge and nCino helped us get over the hump, by making the investment of $1.3 million in the facility. It gave us the opportunity to finish the synthetic turf field, which gives us the opportunity to put more play on the ground so if you have a rain event or a storm event, you don't have to chase people out like we used to do at Legion Stadium when we put the artificial turf there," Wilmington Mayor Bill Saffo said. "So we know we're going to get a lot more play out of those, but without their [nCino's] investment we wouldn't have been able to complete the project the way we wanted."

Saffo said he sees the sports park as having a "tremendous" economic impact.

Jonathan Rowe, nCino’s chief marketing officer, said in a news release, “Youth sports has the power to bring families and people together and create a stronger community. nCino was founded in Wilmington over nine years ago and since that day, we have been committed to the city of Wilmington and the Cape Fear region and are always looking for opportunities to create stronger ties and give back.

"We are proud of this partnership, the ability to help make sports more accessible to the youth in our community, and inspire the next generation of leaders.”

As part of the agreement, Wilmington-headquartered nCino, a publicly-traded company (Nasdaq: NCNO), will pay $1.25 million in 10 annual payments of $125,000. The funding will pay for the artificial turf field and the lights that go with it. Another $50,000 will go toward signs.

As part of the agreement, the facility will be named “nCino Sports Park” for at least 17 years.

The design of the project is nearing 90% completion, and city officials anticipate breaking ground on the sports park later this year.